Steve Hackett rose to prominence as the virtuoso guitarist in the Peter Gabriel-led Genesis of the 1970s, which earned him a permanent position in the annals of progressive rock lore and the hearts of classic prog rock fans.

Hackett has also forged a dynamic solo career that has spanned 40 years, and on his “Acolyte To Wolflight” tour – his first solo album “Voyage Of The Acolyte” was released in 1975 while he was still with Genesis, and “Wolflight,” his newest, came out earlier this year – Hackett is sharing with audiences both sides of that coin, performing a set of his brilliant and diverse solo material followed by a set of classic and beloved Genesis selections, some of which had not been performed publicly in decades, if ever.

Hackett and his impeccable band’s North American leg of the tour stopped at the F.M. Kirby Center in Wilkes-Barre, Pa., on Saturday night, where they thrilled a dedicated throng of followers with a dynamic and spellbinding evening of music. Entering the stage to piped-in Eastern music – speakers in the back of the venue added a 3-dimensional effect to several song intros throughout the show – Hackett was at first joined only by keyboardist Roger King and drummer Gary O’Toole, as they launched into “Spectral Mornings,” a bright and ethereal instrumental track from the 1979 album of the same name. Multi-instrumentalist Rob Townsend emerged to play a flute melody in tandem with Hackett’s electric guitar lead. Roine Stolt, of Sweden’s The Flower Kings and prog supergroup Transatlantic, completed the group on bass and occasional guitar.

The spooky sound of wolves emanating from the rear of the theater signaled the beginning of “Out Of The Body,” the instrumental opening track of “Wolflight.” Hackett’s foreboding solo drew from ancient music but was played with the energy of rock, as Townsend added more mystical colors with soprano saxophone. The “Wolflight” title track, with layered vocals, was next. A relatively simple solo by Hackett over King’s trilled piano built the drama of the song, which intensified before eventually fading out on a guitar line and O’Toole’s wind chimes. 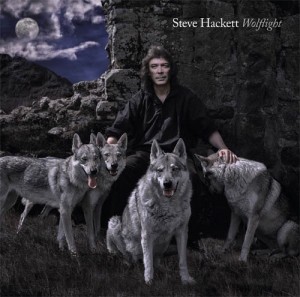 Hackett, who recently performed in Paris, took a moment to acknowledge the deadly attacks in the City Of Lights that occurred on the preceding night. He dedicated the concert to the Parisians, and noted that for the first time it feels like “music and freedom of thought was under attack.” “People say, ‘What do you do for a living?’ I say, ‘I make noise.’ I still do, and so can you,” the musician said, before leading the group into the driving ’70s rock of “Everyday.” He took a playful solo, complete with slides up and down the guitar neck and finger tapping. Hackett and company earned their first of several standing ovations.

The elegant, gothic “Love Song To A Vampire,” from “Wolflight,” found King playing orchestral parts on his keyboards before the song became a hard-rock workout, with Hackett taking a flashy solo, again showcasing his propensity for tackling different genres, often within the course of the same song.  More “Wolflight” material followed, with the upbeat “The Wheel’s Turning” and “Loving Sea.” The latter featured Hackett on a 12-string acoustic guitar, and with its folky harmony vocals, was a bit reminiscent of Crosby, Stills & Nash.

A highlight of the set, and the entire performance, was “Icarus Ascending,” a song from Hackett’s 1978 “Please Don’t Touch Album” on which the iconic Richie Havens originally sang. Hackett told the crowd he had given up hope of playing the song live after Havens’ 2013 death because he didn’t think anyone else could sing it – until he met his current lead singer Nad Sylvan. The theatrically minded Sylvan made his first appearance of the concert for the song and delivered it in a haunting, soaring manner befitting Havens’ approval. “Star Of Sirius,” from “Voyage Of The Acolyte,” was another late-set highlight before the intermission, with four-part vocal harmonies and King and Townsend trading synthesizer and soprano sax solos.

Hackett kicked off the Genesis portion of the evening with “Get ’Em Out By Friday,” a somewhat obscure fan-pleasing track from the band’s 1972 “Foxtrot” album. The multi-character song about landlord greed and tenant displacement featured Sylvan and O’Toole, and briefly Hackett, playing different roles. After Sylvan left the stage during an instrumental portion, he walked back to his microphone deliberately, in time with the music. Another “Foxtrot” song, “Can-Utility And The Coastliners,” was up next and was delivered perfectly. Sylvan honored Gabriel’s vocals without parroting them, while Stolt took on Mike Rutherford’s 12-string electric guitar part and King contributed a classic Tony Banks organ solo. “It wasn’t played, for some reason” during his Genesis years, Hackett said of the song. “Maybe it was too difficult. I’m not kidding.” 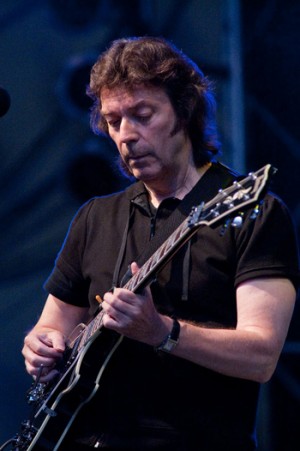 Hackett played gorgeous and resonant acoustic guitar for the beginning of the instrumental “After The Ordeal,” from 1973’s “Selling England By The Pound.” Stolt played an electric guitar solo while Hackett switched to an electric guitar of his own, and then together, the two harmonized gloriously. Like on the album, up next was the show-stopping “Cinema Show,” a long-time Genesis fan favorite that Hackett did not play on his recent Genesis Revisited tours. Stolt manned a double-neck 12-string/bass combo, plucking out the familiar 12-string intro. Sylvan sang the tale of two would-be lovers, named Romeo and Juliet, leaving their respective flats for a movie date. During the lush pastoral section, Townsend replaced Gabriel’s flute with soprano sax. When the tune careened into its odd-time prog rock glory, King nailed Banks’ synthesizer solos with perfection. “Aisle Of Plenty,” “Cinema Show’s” coda and the closing bookend of the album, provided a hushed, dramatic conclusion.

The title track from the 1974 concept album “The Lamb Lies Down With Broadway,” Gabriel’s swan song with Genesis, was a crowd favorite, before Hackett and the band wrapped up the Genesis set with “The Musical Box.” The classic opening song from 1971’s “Nursery Cryme” was tailor-made for Sylvan’s dramatic style, rich with opportunities for him to add visual flourishes to his already arresting vocals. Hackett’s solo featured spine-tingling, lightning-quick slides and the finger-tapping for which he is credited for bringing to the rock guitar.

Appropriately, the encore consisted of one song from Hackett’s solo career and another from his Genesis history. The solo track, “Clocks (The Angel Of Mons),” from “Spectral Mornings,” was heavy, dense and almost industrial. O’Toole, a star all evening, got the spotlight he deserved with an animated drum solo. The Genesis song, “Firth Of Fifth,” flowed from King’s oceanic piano introduction. Sylvan, now adding a strange white hat with a pointed front to his ensemble, delivered the stately lyrics. When he sang of the “siren’s cry,” Hackett evoked it by using a slide on the guitar neck. As the song – and the concert – drew near its end, Hackett unspooled a lyrical, elegiac solo as the band thickened the atmosphere with sheets of sound, before the tune trickled away as it began, with King’s delicate piano.