Millions of listeners have heard Aaron Fink’s songs and guitar playing, thanks to the platinum sales status of his old band’s albums. But they won’t really know him as an individual artist until they listen to his solo debut album, “Saint Sylvania,” which will be available starting Tuesday, March 24.

Having worked in heavier bands for decades – most notably Breaking Benjamin, the Pennsylvania-based, internationally successful act which he was a member of for a decade until 2011 – Fink is associated with a brand of  hard rock that emerged in the late 1990s and dominated radio airwaves and album sales charts for quite some time. But, as Fink explains, he’s a fan of all sorts of music, and that diverse taste is reflected in “Saint Sylvania,” a rock album through and through but a release that might catch many of his longtime listeners by surprise.

You can hear for yourself above, by listening to album track “Standing In The Sun,” which makes its debut here today.

We recently spoke with Fink about the process of making the new record, stepping out into a lead singer role and how James Hetfield taught him how to play guitar.

H81R: What was your mindset heading into this project, and why was now the right time to record and release your first solo album?

AF: Well, I’ve been making music since I was 13 years old so the part of why I wanted to do this is just the continuation of my journey of the last 20-plus years. I just think it’s a new path on my journey. I’ve always written songs in the various bands I’ve been in, I would just let the lead singer sing the songs. Last year when I was putting together the songs for the record I was at a point when I was band-less and I was like, “What the heck, I’ll take a stab at singing these songs.” That was the mindset for it. It might seem like a huge departure for someone who followed me before, but really it’s just a twist and where I’m taking my career right now.

It’s been fun. I’ve kind of always been a sideman in bands, and I enjoy doing that as well, and I just decided to take more of a leadership role in this.

H81R: Is this album a clearer picture of who you are as a musician compared to your previous projects?

AF: Yeah. That’s a great question. Obviously my voice had to shape the music a little bit, but anyone that knows me knows that I like all sorts of music, so I’ve been in heavy bands before, so to speak, I do like heavy music as well, and I like writing riff-y stuff and playing all that stuff on the guitar, but anybody that knows me personally knows that I also like all this other stuff like more rootsier rock ’n’ roll, and I listen to everything from Pantera to Beethoven, and I’m a sponge for music and I’m interested in a lot of different stuff. So I think this is more of a representation or amalgamation of all the things I like. It would be more true to my vision of the music as opposed to when you’re in a band that’s maybe a representation of maybe four different guys’ point of view and it becomes its own beast.

H81R: Tell us about the recording process. From the album credits it looks like you played most of the instruments yourself.

AF: I did the record with my friend Bret Alexander, who you know, if the readers don’t know, he’s the singer and songwriter of The Badlees and he’s a producer. We’ve been friends a long time, and I came in and said I want to do some songs and I want to co-produce it with you. … It was a little lonely, to be honest with you (laughs); I did everything except the drums, and AJ Jump did that, who you know personally, and if the readers don’t know, he’s in a band called King Radio that’s really good, you should check them out. So AJ came in to help me with the drums, and I’m a drummer as well, but I didn’t play drums on this record but I had some parts in mind and I showed him what I was thinking and he hammered it out. We had a little bit of fun in there and kind of chipped away at it and built the songs up, the arrangements and stuff.

H81R: How long have you been singing?

AF: I always sang background vocals in the bands that I was in, but I never really stepped out in the lead vocals. I was always in bands with great singers so it wasn’t necessary for me to assert myself in that role. I mean, I’ve been very fortunate, I’ve played with really great singers over the years and I kind of did my guitar thing to the best of my ability. But like I said, I found myself for about a year and a half without a band and I had been compiling songs and singing them as I went – I have a home studio here.

The point of this whole thing isn’t to be the lead singer. Doing this record for me was more about writing songs and arranging them. I like the design aspects; I look at it almost like being an architect. So this project isn’t about “hey, look at me, I want to be a lead singer.” It’s about, “I wrote a bunch of songs, I think they’re cool and maybe you’ll think they’re cool too.” So that’s where I was coming from. It wasn’t about ego, it was about asserting myself as a songwriter.

AF: That’s a good question. I think what I’m doing now is not in the same genre as what people know me from before, so I think it would be a whole new group of artists. I’d be swimming in new waters there, so it’d be interesting to see how it shapes up, whether that’s locally or something [else]. I’ve been listening to a lot lately. I don’t know if you’ve heard Anders Osborne, I’d like to play a show with him, that’s the one that comes to mind off the top of my head. But I haven’t really thought about that yet. I’m not at that point yet.

H81R: What music caught your ear as a youngster?

AF: My dad’s not a musician, but he’s a big music fan, so he had and still does have an amazing record collection. So I grew up as a little guy with him jamming all these classic rock records and he actually was really into doo-wop music, so strangely I was kind of raised on classic rock and doo-wop (laughs). And my dad was even a disc jockey at Susquehanna University, so I’d go over there with him and they’d have shelves and shelves of records, so that was a lot of fun. My first obsession with music started back then.

Once I started playing the guitar when I was 13, that for me was all about Metallica. James Hetfield kind of taught me how to play guitar. Everything was on cassette then and there was no YouTube, I had to use my imagination and learn how to play everything by ear. So I’d sit there and hit pause, play and rewind and try to figure out all of the little nuances of all those intricate guitar riffs. So as far as playing guitar, that was the thing that really grabbed me was those Metallica records. From there it blossomed into other stuff, but that was what got me, I would say, as a musician. 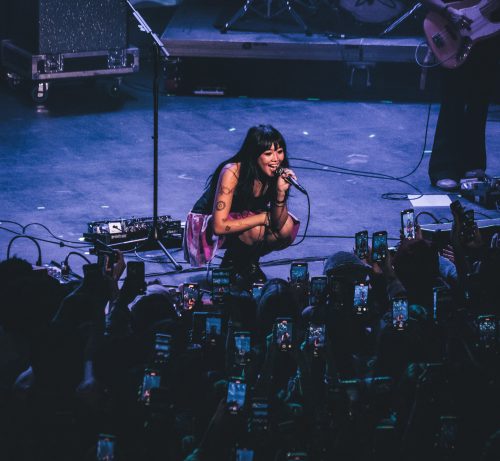