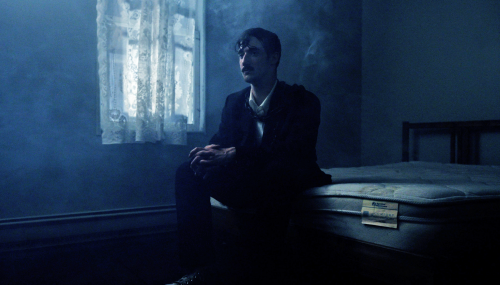 While Samuel and Jonathan O’Connell have been writing songs together — and separately — for more than 25 years, “Hard Work (Honey)” is the first Noxen song written entirely by guitarist Jonathan. Included on Noxen’s debut album, “Rattlesnake,” the video for the track is debuting exclusively below.

“I was captivated by the lyrics and haunted by the melody. It just about broke my heart,” Samuel said of his first impressions of the GarageBand demo his brother had sent him. Samuel then recorded a few scratch vocal tracks in the stairwell of his partner’s apartment and added some sound-effect percussion.

“The song made me think of someone in chains. Perhaps in a chain gang, so as the song builds, it felt appropriate to introduce the sound of a hammer smashing chains as the driving percussion,” he said, adding that this sound effect is the genesis of the music video’s concept.

The video by Samuel O’Connell, shot in two evenings at his home in Noxen, Pa., features a soaking-wet Elijah O’Connell (Noxen’s drummer) following a chain that is fastened to his neck to its source — an alternate version of himself. “While I know what it means to me, it is certainly open for interpretation,” noted Samuel.

Click here to watch our interview with Samuel O’Connell about the making of “Rattlesnake,” his approach to performing live with Noxen and more.