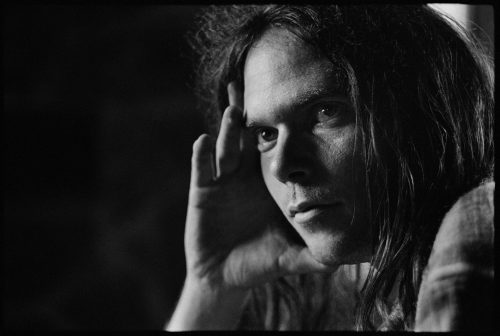 There’s a scene in Neil Young’s new film in which he’s lying in a field at his Northern California ranch, listening to playback of what would become his classic album “Harvest.” Luxuriating in the natural reverb of his music echoing off the hills, he’s drinking a can of beer and smoking, taking questions from the cameraman.

“Are you happy with this one?” he’s asked.

That tension between Young’s steely determination to discover while not knowing what he’s searching for drives the film, “Harvest Time.” It’s the modus operandi of Young’s career, too, in which he has flitted from supergroup to solo albums, from folk to prototype grunge and even a foray into electronic music that was so out of character that his record label sued him.

Filmed in 1971 as Young and his new band of Nashville players, The Stray Gators, make “Harvest,” we see them working in stoned bliss on tracks that seem to have been with us forever, like “Old Man” and “Heart of Gold,” two folk classics, and searing electric rock like “Alabama,” which opens the film. Crosby, Stills, Nash & Young have broken up a few months earlier. He’s 26. It’s a time of transition.

Young, the Gators and producer Elliot Mazer chase the magic mostly at the dusty Broken Arrow Ranch, surrounded by cow pies and hay. It’s remarkable to think that just two years ago The Beatles were recording “Let It Be,” commuting to a city studio and working with production men in suits, as documented in last year’s “Get Back” series. When Young and crew head to London to work with the London Symphony Orchestra on “A Man Needs a Maid,” those two worlds collide.

That the members of CSNY are now estranged makes the interaction in “Harvest Time” between Young, David Crosby, Graham Nash and Stephen Stills particularly compelling and bittersweet. They’re singing harmony overdubs in a studio booth. When Young pulls them aside to work out a new idea, they huddle around the piano as he plays them the chords. They’re so physically close that their heads are nearly touching.

Young, who directed the movie under his filmmaker name, Bernard Shakey, makes good use of abrupt cuts, like when we are taken to London with the orchestra or a Nashville studio. There are no transitions, no after-the-fact interviews trying to put “Harvest,” now 50 years old and getting the deluxe reissue treatment, into context. It’s the way it was, when it was.

“Neil Young: Harvest Time” is in cinemas on Dec. 1 with select encores on Dec. 4. Tickets and showtimes here.