Guitarist-photographer Neal Casal is one of a handful of musicians who can lay a legitimate claim to having played one of the late Jerry Garcia’s treasured guitars in the decades since Garcia’s 1995 death.

Casal, lead guitarist of The Chris Robinson Brotherhood, this week recalled once sitting at a piano alongside Willie Nelson and teaching the icon songs Casal helped write for Nelson’s 2006 album, “Songbird.”

Casal said his performance with The Chris Robinson Brotherhood at this weekend’s Outlaw Music Festival, headlined by Willie Nelson and Neil Young at the Pavilion at Montage Mountain in Moosic, will be a reunion of sorts for him.

The festival begins at 1 p.m. and opens with a set from Scranton-based Cabinet, a recently added act.

While discussing Outlaw Festival with Highway 81 Revisited by phone this week from California, Casal made the hard-to-believe suggestion that Willie Nelson may not even remember Casal if and when the pair run into one another on Montage Mountain.

“I doubt Willie would remember me from making that record,” Casal said during a phone interview. “He makes a lot of records. I look different now.”

Casal nonetheless comes across as a confident musician with a thick skin, which is probably why he hit it off so well with Chris Robinson, frontman of the Black Crowes, and why Robinson invited Casal into Robinson’s solo band a few years ago. (CRB’s current lineup also includes keyboardist Adam MacDougall, also from the Black Crowes, as well as bassist Jeff Hill and drummer Tony Leone.)

The two hit it off instantly, and Robinson invited Casal into his Brotherhood about five years ago.

Since then, Casal has become Robinson’s musical, songwriting lieutenant, a role Casal has clearly embraced.

Casal, who’s recorded several solo albums, and Robinson combined to write a majority of songs for CRB’s latest album released in July, “Anyway You Love, We Know How You Feel.”

“It’s fantastic. I’m five years into this band. We’ve done hundreds and hundreds of shows,” Casal said. “This band is, by far, one of the best things that have happened to me in my life.

“Chris is an amazing person to work with. He’s so open. He doesn’t think like normal people. He’s really adventurous. He has his own mind. In a world full of sheep, he’s a true individual. It’s not like he monopolizes everything. Everyone’s invited.” 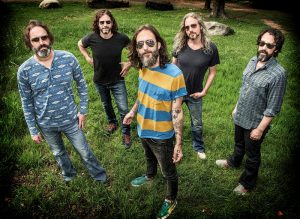 Asked what it’s taken for him to become comfortable taking a back seat to a frontman like Robinson, Casal said it’s been his evolution as a musician.

“I’ve been the front guy before,” Casal explained. “One strange thing I find is as I get older, I realize that I’m better in the lieutenant’s role. It’s hard to explain.

“As we grow into ourselves, we kind of — when you’re young, you’re still trying to figure things out. As you get older, you find your niche. You find where you’re truly comfortable in life.

“I think, when I was a little bit younger, I was forcing myself a little bit — without knowing it — into a role that was not exactly the best thing for me. It’s been like a gradual refinement and adjustment over time. I’m still, like, taking a slight move to the side and out of the spotlight. I’ve found it’s more my calling.”

In speaking to Casal, who also plays guitar in Hard Working Americans — alongside Widespread Panic’s bassist Dave Schools and drummer Duane Trucks — you get the impression he really is OK with that role.

Especially considering Casal is always juggling so many other projects.

He acknowledged that the assignment of producing Fare Thee Well’s intermission music last year for the Grateful Dead was simultaneously thrilling, yet “daunting.”

He produced it over two days.

Justin Kreutzmann, son of Grateful Dead drummer Bill Kreutzmann, sought out Casal for that role after getting to know Casal through Casal’s writing of the musical score for a documentary on the Grateful Dead’s Bob Weir — “The Other One: The Long Strange Trip of Bob Weir.”

“It was very overwhelming,” admitted Casal, a New Jersey native and Grateful Dead fan who saw about 20 shows before Jerry Garcia’s death. “It was daunting how much music we were asked to create. It was daunting on a number of levels. Obviously, you’re making music, knowing it’s going to be played at these final Grateful dead shows with these huge audiences.

“I was asked to do the music. It was a big deal, especially for me being the Dead fan I am. Especially being the kid at Madison Square Garden and in the back row at the top of the arena, having just barely scraped enough money to go.

“It went so much further than I thought it would. I didn’t expect people to hear it. I never expected it to be released. It was only be played at the intermissions.” 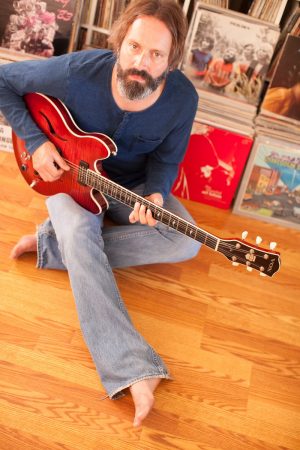 Casal’s intermission music has since been released for sale on CD, under the title “Circles Around the Sun,” through the Grateful Dead, and he and the band he formed to record it performed it at last month’s Lockn’ festival under the same name.

Casal admitted he was initially reluctant to perform the intermission music before a live audience.

“It was such a magical slice of serendipity. I almost didn’t want to tamper with it. I almost wanted to leave it alone, because it’s so precious to me,” Casal explained. “Gigs are a crapshoot sometimes. The best-laid plans can go straight to hell.

“I’m glad we went and did it. It worked out really well.”

Casal is no stranger to serendipity. He had the opportunity to play the late Jerry Garcia’s legendary guitar, “Wolf,” back in 2012 during a Chris Robinson Brotherhood show in San Francisco. Casal had been welcomed into the Grateful Dead family long ago through his work with Ryan Adams, a frequent collaborator and friend of Dead bassist Phil Lesh.

“It’s a precious instrument. You have to be very careful with it,” Casal said of Wolf. “I definitely always held it with two hands. But, on the other hand, it’s a very sturdy instrument that was built over 40 years ago, well over 40 years ago. It’s still a rock-solid instrument.

“It was a tremendous honor. It’s a beautiful sounding instrument. But it has nothing to do with its pedigree. It’s a great instrument all on its own.”

Casal was so impressed by Wolf that he had a guitar with similar characteristics custom-made for him that he plays today.

“It was kind of a turning point in my playing,” Casal said.

Casal, whose published photography includes a well-received book of candids from his days on the road playing with Ryan Adams’ band, The Cardinals, in addition to Ryan Adams and CRB album covers, fittingly quoted Neil Young during his interview with Highway 81, suggesting, “It’s too late for me to be cool.”

Casal was referring to his unique routine of keeping a camera within close range on stage during performances, and suggesting that the practice may be frowned upon among fans.

He doesn’t care if it is frowned upon.

Casal recently captured a poignant moment between Chris Robinson and Lesh, embracing at the conclusion of a Phil and Friends show at the Lockn’ Festival in Virginia with the crowd as a backdrop.

He published a black-and-white version of the moment on Instagram that’s received nearly 1,000 “likes.”

Casal has a natural photographic eye and emulates street photographers whose work he’s seen over the years, even though he only took up photography several years ago.

“I realized I was starting to forget where I’ve been,” Casal said of the photography hobby. “I started taking photographs to simply remember where I’ve been to document my life. It sort of took off from there. I never trained for it at all. I’ve never taken a photography class. I don’t know much about photography on a technical level. I’m pretty good on an intuitive level. If you ask me to light something artificially and be a real professional photographer in that sense, I couldn’t do it.

“But I’m good with natural light. I kind of know where the light is.”

JOE BURKE GOES INTO THE ‘MYSTIC’ WITH FIRST SOLO ALBUM