“Your color opens doors, mine’s fightin’ a different war/ Don’t you believe we all deserve the same view?”

Danielia Cotton poses the question in the title track of her new album, “A Different War,” a relevant and urgent message as the issue of racist and brutal police behavior has come to a head. The songs also address materialism, relationships and other deeply personal and social issues.

“I know it sounds weird, but things you feel just come through you. That line just came,” Cotton tells Highway 81 Revisited. “That was it, and I wrote it down. I can’t even say I was thinking of anything. It just came and flew out.”

Delving deeper into the ideas that inspire her to compose such socially pointed work, she says, “I literally thought of the conversation of someone of color and someone white, and them being like, ‘Obama won, everything is good.'”

Growing up in Hopewell, N.J., was a challenge for the multiracial Cotton (who is African American, white, Native American, Puerto Rican, Spanish and Mexican Indian), where she was one of only seven black students in her high school class. The racism woven into her day-to-day life goes back as far as she can remember. In Miss Hill’s first-grade class — she remembers the teacher’s name — the class sang the old folk song “Cotton Needs Pickin’.”

“We start singing, ‘Cotton needs pickin’ so bad, we’re gonna pick all over this field.’ Why would I remember this song? It would’ve been on the news today,” she says. “The kids were just awful, picking at me because I was Danielia Cotton. Singing an old Negro spiritual in my classroom, in my classroom, in elementary school. It’s awful. I remember that tune because that’s what that day did to me.”

As an adult, the challenges are different but sadly familiar. She and her partner, who is Jewish, have a 2-year-old daughter.

“I think this is where we are,” Cotton says. “The saddening thing for me is at this point in my life to have a little girl who is biracial — blacks and Jews right now, antisemitism and racism are at all-time highs. I never thought that at this point in my life that this is what my daughter would be facing. So I’ll do what I can in my lifetime to fix that so that she does not deal with that or face that, and that’s all you can do. It’s the rest of us. I mean it. We’re all we’ve got.”

Growing up, Cotton’s bedroom shared a door with her brother, so she heard the rock music he was spinning, like Led Zeppelin, Todd Rundgren, Led Zeppelin and Yes. Downstairs, her mom would be listening to Chaka Khan singing a song from “Porgy and Bess,” Bonnie Raitt or jazz. Her singing aunts, who Cotton sang with in a gospel ensemble as a little girl, “were on tour with Southside Johnny and more in a rock, Southern rocky kind of thing.”

“My mom and her six sisters, my own aunt Carol Brooks, I’d say she could harmonize with a tree,” Cotton says. “She did a thing a while ago with Ween. In churches and groups like that, with family, the six- or seven-part harmonies, it trains your ear.” Meanwhile, “Rock definitely spoke to my angst as the only black kid in a white school.”

After graduating from the prestigious Bennington College in Vermont with a degree in theater, she moved to Manhattan and began gigging in clubs like The Bitter End and The Cutting Room. She released her first full-length album, “Small White Town,” in 2005. She followed up with “Rare Child” (2008), “Gun in Your Hand” (2012), “Woodstock” (2014). “The Real Book” (2014), “A Prayer” (2016) and “The Mystery of Me” (2017). Along the way, critics were drawn to her songwriting prowess, guitar playing and a voice they compared to Raitt and Janis Joplin.

The first two singles from the album were “Forgive Me,” which Cotton wrote with her sister Catherine Fulmer-Hogan, and “Cheap High.” She wants to put a video out for the title track as soon as possible because of the timely message, and she says she’s also “hoping to do sort of an episodic eight-to-10 episode thing, the story of my life till now, which we’re in the development of trying to do.”

Cotton planned to play an album-release show at The Iridium, but when the coronavirus pandemic shut down public gatherings, that was scrapped. Instead, she played a Radio Woodstock 100.1 “Sofa Sessions” livestream on the night of the release. She’s been holed up in Woodstock with her partner, who is dealing with a “weird illness” as they mourn the recent death of his mother.

Cotton herself is a cancer survivor and gave birth to her first child at 50. Eight years earlier, she lost twins who she became pregnant with through in-vitro fertilization.

“There is a lot on my plate,” she says in an almost comical understatement. “And music is literally saving my life.” 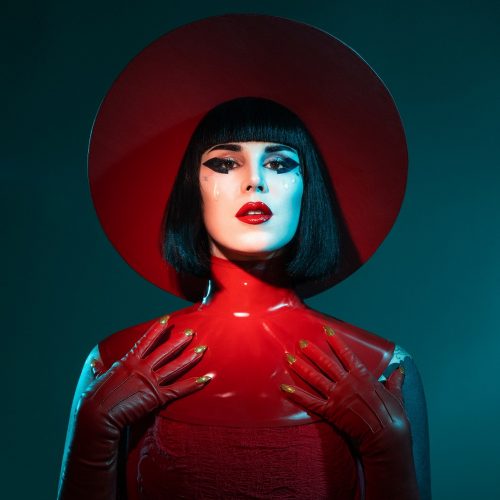