More than fifty tears after his passing, Woody Guthrie’s legacy continues to touch many corners of American life, whether in the songs of folk troubadours like Bob Dylan or in the various social justice movements that have gained traction in an increasingly polarized nation.

Equally influential, if not more so, is the work being done in his memory to raise awareness about Huntington’s disease, the fatal genetic afflicton that claimed his life in 1967.

Guthrie’s widow, Marjorie, started the Huntington’s Disease Society of America in 1967. The HDSA has grown into “the world’s leader in providing help for today and hope for tomorrow for people with Huntington’s disease and their families,” and on Friday night, the HDSA combined Guthrie’s musical, social and medical legacies for an event at (le) poisson rouge in Manhattan’s West Village for a benefit concert dubbed Night of the Machine. On the bill were Martha Wainwright, Dave Hause and Brendan Fletcher.

As we reach the midpoint of Huntington’s Disease Awareness Month, we chatted with HDSA President and CEO Louise Vetter. Here are some highlights of the interview, edited for length.

On the concept behind Night of the Machine

The name of the event is a direct tribute to folk singer Woody Guthrie, who often on his guitar had the words “This machine kills fascists.” It was really just a very overt acknowledgement of the power of music and the stewardship of folk music in the ’40s, ’50s and ’60s and carrying that legend forward. It’s been adopted by so many of the classic rock and I guess you would say rock singers. Bob Dylan is the quintessential disciple, and on to people like Billy Bragg, who has a very powerful social consciousness. 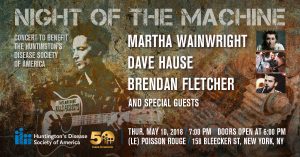 Here we are at the 50th anniversary of the HDSA, which was founded by Woody’s widow, Marjorie, upon his passing, and the Guthrie family has always been involved in our work. When he passed from Huntington’s disease, so little was understood about it, and Marjorie really took up the mantle of putting the HD community together and creating hope for people who had really been hiding in the shadows. She became the one-woman Army creating advocacy and a real philanthropic organization. Nora (Woody and Marjorie’s daughter) remains an advocate for HD and is involved.

On what an HD diagnosis meant during Woody Guthrie’s time.

Back in the first half of the 1900s and before that, HD was incredibly misunderstood. It was often seen as just a movement disease, so they would look at the chorea, the long, sweeping movements, and for other families it was literally “Crazy Aunt Helga,” and they’d sort of lock them in the closet. There was a lot of shame. It’s hereditary, and there was a misperception that it only affected women.

When he met Marjorie, he actually told her this disease affected my mom. They didn’t know what it was called, but don’t worry about me, Marjorie, it only affects women.

As Woody started to show symptoms and Marjorie started to look for answers, she’d go from hospital to hospital in New York City, and they had no idea. They went to Bellevue for a series of evaluations for a week or so. And after a week, Marjorie gets a phone call from the doctor who was looking at his case, and he said we gave your husband a subway token and he’s on his way home. We have no idea. 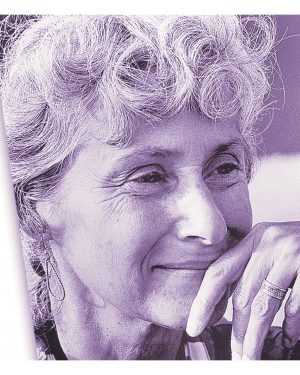 Some junior doctor later said it might be this thing called Huntington’s chorea, but there’s nothing you can do. So he got moved to Greystone (Greystone Park Psychiatric Hospital in New Jersey). They really just provided a bed. He was mixed in with the truly insane and severely disabled. The nursing staff had no idea what to do.

With the constant movements, full body movements, you’re burning tons and tons of calories, so Marjorie would do extra feedings. She put elastic waistbands in his clothes so he could dress himself. He never tied his shoes, which became this quirky little trademark that Bob Dylan took up for a while. She would bring the kids, Arlo and Nora and Joey, out to visit Woody every week. They’d drive across 42nd Street, go out to New Jersey and feed Woody all day long to try and bulk him up to try to sustain him for the next week.

I say this because it’s a really good example of how families need to figure out solutions especially when in the absence of clinical understanding. So that was back in the ’60s.

It’s really amazing how the Guthrie family and Nora have really stewarded Woody’s impact. They’ve worked over the past decade with bands like Wilco, as a perfect example, who have kept it fresh. You can still hear “California Stars” on Sirius/XM, which is fantastic and alive today. I think it has helped generationally to provide a bridge that takes it beyond folk music. A lot of people don’t even know what folk is anymore. I think Woody’s legacy influence is beyond that genre.

For more information on Huntington’s disease and the HDSA, visit http://hdsa.org/.