After spending most of Monday in bed recovering from the weekend, I woke up at my mom’s house on Tuesday in Berwick PA pretty early (8am). After having a quick breakfast, I hit a few quick errands in NEPA before hitting the road back to Philadelphia. On the way down, I stopped in Bethlehem to get a much needed set up on my guitar. I will take a second here to recognize the awesome dudes at Guitar Villa in Bethlehem. They built me a new guitar earlier this year and it’s the nicest axe I’ve ever owned or played. If I am ever traveling through Lehigh valley, they are always more than happy to take me in on a moment’s notice and fix whatever needs to be fixed. Elevation and humidity has definitely taken its toll on my instrument over the last few weeks and it felt good to get it back into tip top playing shape. As I mentioned in an earlier post, I only travel with one guitar, so it’s important to keep the thing in the best working shape possible.

The band reconvened in Philadelphia around 4pm for a quick and minimal rehearsal of some material we plan on playing this week. Our first show of the week is tomorrow in Buffalo, NY. The drive from Philly to Buffalo is about 7 hours, so we opted to bang out a good portion of the drive Monday night. We hit the road around 8-9pm and drove to Syracuse (about 2 hours shy of Buffalo). I will make a note here that it was kind of unsettling to drive down the turnpike earlier in the day only to drive back up the turnpike past Scranton later in the evening in the van. We arrived at our hotel around 1:30am and I was happy to be in bed by around 2-2:30. My body is definitely still recovering from the weekend. 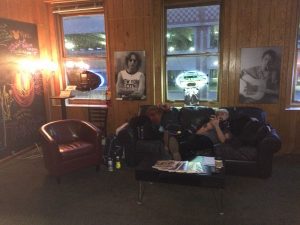 For this week’s run of shows, we opted to pick up hotels for 3 nights in Syracuse to kick things off (we play in Syracuse on Thursday). This allows us to catch up on some sleep (as most hotels require an 11am checkout) and also allows us to not have to unpack and repack our suitcases for a few days. The drive from Syracuse to Buffalo is only about 2 hours. We arrive for load in around 5pm. As soon as we get to the venue, it begins downpouring. This seems to be the tour of “rainy load-ins.” Buffalo Iron Works is a relatively new venue stationed in the historic cobblestone district of Buffalo. Similar to “Steel Stacks” in Bethlehem PA, this building sat abandoned and unused for many years before the city decided to rebuild its industrial district. In recent years, this has become one of the premier mid-level sized venues in Buffalo. New England based band “Haley Jane and the Primates” are on the road with us all week, so I was also looking forward to getting some hang time in with them this week as well as watch them play.

After having some seriously mediocre pizza (note to self: never get Old Forge style pizza outside of Old Forge PA), I caught some of Haley Jane’s opening set before lounging and caffeinating for ours. We were scheduled to play one 75 minute set which seemed to fly by. I thought it was some of our best playing all tour and the crowd seemed to agree. After we finished up around midnight, we were amazed to see that the World Series game was still on. After most people cleared out, we gathered around the bar to watch the last few innings. We packed up the van and jetted 2 hours back to Syracuse. Made it to bed by around 4am. 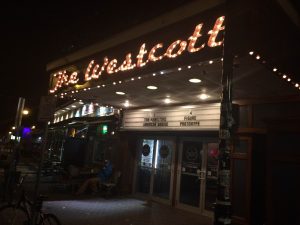 After catching up on some sleep and grabbing some breakfast nearby at a great place called “Cafe at 407,” we headed over to the other side of town to load in for 3pm. After quickly staging my stuff on stage, I ran a quick errand to a local guitar shop (Gorham Brothers music) to get a quick repair on a piece of gear. By the time I got back, the band was ready to soundcheck. We usually utilize soundcheck to run some songs we haven’t done in a few shows, or in the case of this week, keeping the Bowie material fresh in our heads for Saturday’s show. After we were done on stage, we had a considerable amount of time (4-5 hours) to kill before showtime. As I mentioned in an earlier post, when you revisit the same places in the same cities, you get to know the area that surrounds that particular venue. The 2 block radius that surrounds the Westcott is one of my favorite in the entire country…mainly due to the amazing coffee shop across the street (Recess Coffee) and the unnamed Chinese takeout spot down the block. These are clearly the two keys to happiness on the road. 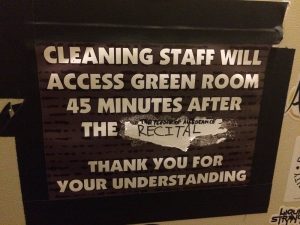 Haley Jane and the Primates kicked things off again. I am really glad to be getting some hang time in with them this week. They are all around great musicians and people and couldn’t be happier to have them on the road with us. Once again, I felt particularly good about our set. The band has seeming really come into its own in the last few weeks and i’m super excited to see what the rest of the year brings for us musically. After finishing up and loading up the van, we arrived back at our hotel on the earlier side (12:30am). I was not complaining about getting to sleep at a reasonable hour. 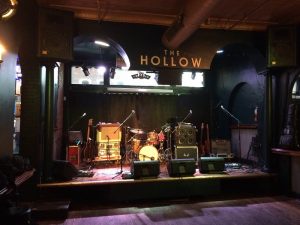 Pretty standard tour morning. Squeezed in a workout at the hotel before grabbing food and hitting the road to Albany around noon. It was only a two hour drive to Albany from Syracuse and our load-in time wasn’t until 5pm, so we were able to take our time. The Hollow is another one of my favorite venues to play anywhere in the country. It is a great size (300 person capacity) and the food is out of this world. They always take care of us and make us feel at home when we play there. There was a really nice ticket pre-sale count for this show so we were anticipating this to be a god night. 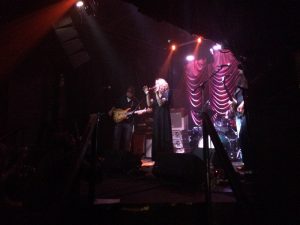 Haley Jane and her band delivered another killer opening set, and by the time I stepped out of the green room to set up some gear, the place was totally packed. We delivered two sets of what I thought was our best playing all tour. It seems like we have gotten into a nice rhythm, both on stage and off stage at this point in the tour. We wrapped up our encore at 1:45 after 2 long sets beginning around 11. Two set shows definitely take a lot out of me both mentally and physically. It was about 3:30am by the time we packed up and got to our hotel. Tomorrow we head to NYC for our third masquerade show of this tour which includes us playing David Bowie’s final album “Blackstar” in its entirety. Despite my excitement, I tried to get to sleep as quickly as possible in anticipation for a long work day ahead. 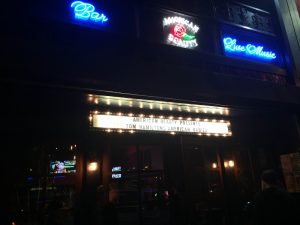 We were up and out of our hotel by noon to give ourselves enough cushioning for the beast that is NYC traffic. Saturday was a rare occasion where I allowed myself to sleep in to the last possible minute. All 6 of us are definitely feeling the effects of the long days that preceded us. We arrived to the venue around 4pm for load in. “American Beauty” is a new venue that seems to be the new jam-band friendly venue of Manhattan. I’ve played a lot in NYC over the years and have spent a good amount of time there. Through my experiences, it’s hard to find a venue particularly in Manhattan that doesn’t make you (the band) feel like they are doing you a favor to let you play at their venue…even if you sell a bunch of tickets. American Beauty was one of the most welcoming venues in Manhattan i’ve performed at in quite some time.

We also scored van parking right out front of the club. In midtown. On a Saturday. That in itself is a miracle. 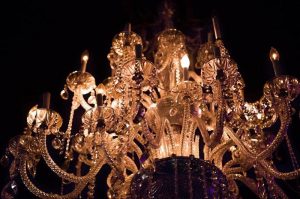 For our third masquerade show of the tour , we were joined by horn players Paul Vercesi and Luke Penella. We also received some additional vocals from our tour manager, Lauren Apichell (who is an incredible singer). We took some time during soundcheck to make sure everything was dialed in properly with all of the additional personnel. After soundcheck,we grabbed dinner at a restaurant nearby. We got back to the venue with just enough time to get changed and hit the stage to a packed house that seemed eager to hear us. Our first set seemed to rival the tightness that we achieved the previous night in Albany. After a very quick set break, we returned to the stage to perform David Bowie’s “Blackstar”. The vibe of the room seemed to match the darkness of the music perfectly. It felt like I was performing in a real life Edgar Allen Poe story acted out in the form of a rock show. After the second set, we hopped back on stage after several minutes for an extended encore.

Well what can I say. This bittersweet show concludes the “van tour” portion of our fall tour. After the show, everyone seemed to go their separate ways. Tom had to stay an extra night in NYC for a show. A couple others decided to stay in the city while I opted to take an over night bus back home. I’d like to point out that one of the loneliest places one could be in their travels is in the basement of a bus station in NYC at 3am with a suitcase, guitar, backpack, and 40 pound pedal board.

I’m completely drained. I haven’t slept in the same bed for more then 2 days straight since Peach Fest (mid August). Lots of shows and traveling in the upcoming weeks and even more preparation (both musically and logistically). I will be logging my travels until Thanksgiving….so stay tuned! Catch you all soon.