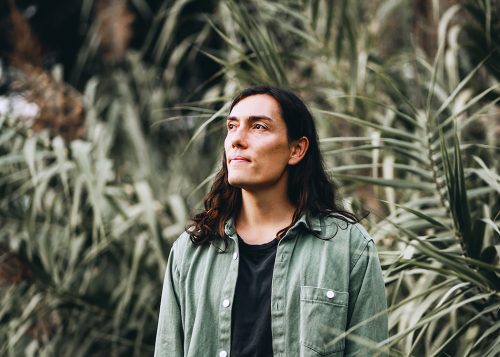 VALLEY MAKER CHECKS IN FROM THE CROSSROADS

“I would say the whole record was kind of written in the shadow of that, one way or another,” Crane says during a recent phone conversation, taking a break from fixing up the couple’s home in Columbia. “Before I left Seattle, I had written a few songs, like ‘Mockingbird’ and ‘On a Revelation,’ a few more I wrote after arriving in South Carolina. It was kind of a weird flow of events, partly because I had a big Europen tour in the middle of 2019 with Steve Gunn, then drove across the country and flew back to Seattle (laughs). It was very transient. I was thinking about things, like is Seattle home? and negotiating with what that means and place and belonging.”

A few other musicians would swing by to add their parts, and long-time collaborator Amy Godwin added vocal harmonies.

Released in February on NYC’s Frenchkiss Records (Local Natives, The Antlers, The Hold Steady), the album was recorded at Trevor Spencer’s Way Out Studio in the woods outside of Seattle. It’s a rumanitive album, best described as indie folk but with some hypnotic elements that add to the uncertainty he’s singing about. The literal bent of the lyrics is no surprise, as Crane studied human geography at the doctoral level at University of Washington in Seattle before coming home.

Before heading out on a tour that will include stops at the Wayne Picnic Grove outside of Philadelphia (orginally scheduled for 118 North) on Wednesday and the Bell House in Brooklyn on Thursday, Crane spoke with Highway 81 Revisited about the new record, the shows and how growing up in a conservative church community impacted his work.

What format will you be playing in for these dates?

I have almost exclusively toured with a full band for years now, and I’m really excited to play these shows as a duo with Amy. It’s going to be guitar and both of us on vocals. A lot of the shows are kind of in listening rooms, some are seated and kind of spaced out. I felt it would lend itself well to that setup. And Amy is a choir teacher in school and is on summer break and is able to do it. We used to play a lot of shows like that back before I moved to Seattle I started collaborating with her in 2019, so some of the earliest dats of the project.

How did your paths first cross?

We were just on a bill together. She’s a great songwriter and performer in her own right.

Tell me about the atmosphere of the sessions for the album at Trevor Spencer’s Way Out Studio.

He has had his studio in the woods outside of Seattle for like the past five years and I felt I wanted to make the record in that space. It used to be a horse barn. My previous records have been relatively compartmentalized between different sessions, but this one was kind of continious and immersive over one period of time. I just kind of moved there.

Did you pretty much sequester yourself there?

Yeah. I think I went into Seattle once or twice the whole time, but I pretty much stayed out there and just enjoyed being in the space and not totally working around the clock. Trevor and I were in there the whole time and he was the producer and the engineer.

Your self-titled debut album was made up of songs from your college thesis project and is based on the Book of Genesis. Can you tell me more about that?

It was kind of an interesting one. I grew up in a conservative town and was always told about the world where people came from and why people are good vs. bad. As pretty much everyone does, I was having some major-league questions about that through my college years. I was in the honors college and had to do a thesis that reflected some other part of who you are. I didn’t study music but I played in bands and thought, what if I tried writing songs about the beginning of everything? In a way it’s kind of a concept album and definitely different from everything I’ve done since.

Was your family particularly religious?

Were you allowed to listen to secular music?

I think for a while my parents sort of relaxed a little over time and said, OK, this guy really loves music and is spending all day up in his room playing music (laughs), so it’s probably fine for him to have a Jimi Hendrix CD. There was a handicap at some level when people put on a Beatles record (laughs), my parents never listened to that. There were some limitations but some parts that were pretty cool, because I was in a small town and my family was really involved with the church, and I joined the band at that church at a really young age.

I look back at that time in my life very favorably. I was playing music, playing in a band, playing in different spaces.

As you started getting more into music, who are some artists that had an impact on you?

I think in college and even the end of high school I started getting into some of the left-of-center songwriters that I love to this day. Bonnie “Prince” Billy, Joanna Newsom, Bill Callahan, Destroyer, Mount Eerie, for sure. And classic stuff like Joni Mitchell and Neil Young and some Bob Dylan records. I think throughout college and into high school I became aware of Drag City as a record label and Silver Jews. Jason Molina and Songs: Ohia was a huge project for me when I was trying to figure out what I wanted the aesthetic of Valley Maker to be.

You’ll be playing at Bell House in Brooklyn on this tour. Do you have any standout memories of playing in New York?

When my last record came out, in the fall of 2018, I think, we had a show at Union Pool. We sold some tickets. I’ve been releasing records with Frenchkiss, and all those guys are based in New York. We went out to dinner and came back to the show to see it was sold out. It’s an awesome spot. That felt like a really cool moment, and it was also the first show of that tour.