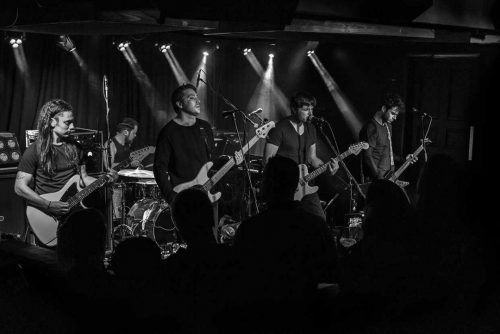 “Carry It,” the new track from University Drive, is a dark journey with dark, pointed lyrics like “When I was dead you were deaf ears.” With a lyric video that debuts exclusively below, it’s part of the group’s currently untitled third album. Like 2019’s “Clear,” its a deeply personal effort.

“The record basically picks up where the last one left off,” says Ed Cuozzo, who sings, write songs and plays multiple instruments for the Northeastern Pa. band. “It’s more so about the aftermath of going through something insane, like grief and watching families struggle. ‘Carry It,’ that song especially, that’s a heavy, heavy song, kind of some heavy family stuff going on at the moment.”

The lyrics, in the second person, appear to be addressing a particular person, but Cuozzo says it’s not that straightforward.

“There definitely is a person, but there’s a part of the lyrics that are tied up in the naivete of youth, especially in the second verse or first verse, like waiting for someone to tell you everything is going to be OK and realizing that that person isn’t there. … The song is kind of all over the place, but there’s a specific person I’m pointing the finger at for sure. And there’s a lot of parts where I’m pointing inward.”

The band wrote “Clear” together when “all of us were going through crises at the time,” and that was the plan for the upcoming album until COVID hit “and turned everything upside-down,” Cuozzo says.

“At the time, I was laid off from work,” he says. “I had just kind of put together a decent demo studio — a decent laptop with decent speakers and a good interface. I mad a ton of demos on my own. We were all kind of really nervous about getting together in the beginning. I would program drums, delete them and take that audio track and bring it to the studio, and Steve [Martin] would track drums to it, or depending, on some songs I would track drums to it. Some songs I was really focused on and knew exactly what I wanted. Two or three, I kind of played everything on them, not out of ego but more out of time [constraints].”

University Drive recorded the new songs with Paul Smith at his Eight Days a Week Studio in Northumberland. Cuozzo’s bandmate Martin has known and worked with Smith, the bass player for The Badlees, for years.

“What had happened was we did ‘Clear,’ then we did the tour, and we came back and I guess [Martin] and Paul were starting to talk a little more and sharing gear,” Cuozzo recalls. “Me, Paul and Steve had a drink and went to a diner and talked about maybe doing something together. The first thing I hit on with Paul is he and I were both huge Weezer fans. I really wanted to make a record that’s not like the Foo Fighters’ ‘The Colour and the Shape,’ but in the vein of the big rock record. He kept referencing we should shoot for like [Soundgarden’s] ‘Superunknown,’ that should be the level. Yeah, fuck yeah, that’s the level! We just hit it off 110%.”

University Drive has done several tours with heavy alternative rock band Cold and recently played the last two shows of the band’s tour at the Gin Mill in Northampton and the River Street Jazz Cafe in Plains.

“Their fan base is really kind, [and] a couple people reached out and said we liked you guys. But after these two shows, all of a sudden a decent part of their fan base just kind of came our way and we have a little community with those people.”

That connection led to University Drive meeting Madison, Wisconsin, visual artist Hanna Bruer at a show in Indianapolis. She ended up doing the lyric video for “Carry It”

“She just has amazing, amazing artwork,” Cuozzo says. “She does all that by hand and writes all those letters by hand. If you look at her artwork, it’s off the chains good. It’s just one cool thing that came out of that tour. We might have her due the album artwork.”

A release date for the new album has not yet been announced.

“The idea is to basically drop a single a month,” he says. “We’re doing that with four singles. Then at the end of it do a little something that I really don’t want to say on record yet, then a possible fifth song along with the entire record.”

Tonight, University Drive will play the final show at Scranton venue Stage West along with James Barrett and Room 108. 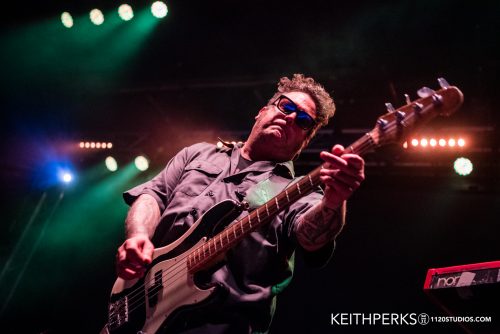