Producer and musician Clyde Rosencrance, working under the name Sleeplore, released the project’s first song last week. “Let Go,” he says, “is part of a silo of songs that are a little bit more mellow, introspective type of songs.”

“I don’t usually sit down with the intention of writing a story,” says Rosencrance, who has been operating a studio in the Scranton area, Republic Audio, since 2015. “It’s usually a stream of consciousness. Being production minded and used to being a member of a band rather than being a core songwriter, I would always focus on the music first, and with the vocals focus on what I want to hear rhythmically and sonically. I’ll shape the rough ball of clay from there. I guess you would say it’s more of a subconscious thing.

He wrote “Let Go” a few years ago.

“I think all of us have gone through different parts of our lives, where it can be anything from a relationship or loss of a job or other type of loss or something that’s weighing you down and you need to let go of it,” he says of the meaning of the new single. When it comes to anything, once you let it go there is going to be something better through that door that you walk through.”

Rosencrance says he has four Sleeplore songs ready for release. In addition to singing, he plays guitar, bass and drums on the songs. Alan Hanczyc plays bass on a few songs, and Steve Martin from University Drive contributed to some tracks.

Rosencrance previously played in area bands The Magdalyns, OurAfter and The Collective. He says Sleeplore is his first solo project “in a sense,” but he has done music on his own, which has been licensed for stores, radio stations, TV and movies.

He started recording music while he was in high school at Abington Heights.

“Quite literally, it was that I was writing music and forgetting it,” he says. “So I ended up buying a TASCAM 4-track recorder. I eventually got a computer program that was the worst thing in the world and started to experiment.”

He worked at Sound Investments, a studio in Scranton, and did a lot of freelance work before he started his own studio.

“Over the last couple of years I’ve worked on dozens and dozens of projects,” he says. “This year has been interesting, because of the pandemic I’m not taking in-person clients.” 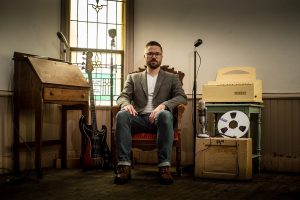 Recent clients include Chicago band Ahead of Ourselves and Demons, based in Virginia. He also sings the praises of local artist Timothy Zieger, “one of my favorite all-time songwriters of anyone in the world.”

As a producer, Rosencrance’s influences tend toward the modern and alternative rock worlds.

“There’s something about he way he mixes,” he says. “If you have a good set of speakers or headphones and compare it to other albums, there’s a whole octave of subfrequencies into the mix that didn’t exist 10 years ago. He’s all about contrast. … He’s a super nice guy, I’ve met him a bunch of times. He’s a really good photographer too.”

Another favorite is Eric Valentine, who worked on Queens of the Stone Age’s breakthrough album “Songs for the Deaf” as well as the most recent album by his wife, Grace Potter, among many other high-profile artists.

“I was at his studio holding Dave Grohl’s snare drum,” Rosencrance says. “His records are really great too. He’s a total technical geek, so he knows everything that needs to happen, but he can also go deep if you want that 1960s mono drum sound.”

Rosencrance said he has thought about live performances for Sleeplore, but he’s not there quite yet.

“I feel it would have to depend,” he says. “I remember when I saw Sigur Ros 10 years ago at the Mann Center [in Philadelphia], seeing them in person the first time, seeing their stage setup, it became an experience. I’m not saying this stuff is anywhere as deep as that, but I feel it needs some level of support to make it a thing and lend value to people’s support.”