ROSARY GUILD: ‘IT’S PRETTY, BUT IT CAN GET SCARY’

Interviews, On The Rise
Michael Lello
0

Rosary Guild’s sound  is cinematic, expansive — big. But at its core, the Wilkes-Barre group comes from a place of isolation. The isolation of growing up in the “boonies,” as singer, songwriter and guitarist William McHale puts it. The isolation of creating musical motifs alone, in a rented rehearsal space in a former church, for nearly five years, before adding additional players.

“Where I was from, you didn’t go to local shows,” says McHale, who grew up in Susquehanna, near the New York state-Pennsylvania border. “There were like battles of the bands in high school and stuff like that. Being like an hour and a half away from Wilkes-Barre, if you went to see a show, you had to trek down to Philly or New York or see if anyone was coming to one of the colleges in New York [state].

“I still always played music, but we played music in barns and garages, and riding 4-wheelers to each other’s houses. It definitely wasn’t a ‘scene’ where I grew up, but it kind of was neat being in that isolation. ‘Oh cool, what does a band do? What do you do with drums? I’m just going to make it up.'”

Years later, McHale is joined in Rosary Guild by drummer Gerald LaMark Jr., with whom he shared the rehearsal space at Downtown Arts, the former church in Wilkes-Barre, and bassist Danielle Crockett. The trio has a self-titled EP from 2016 under its belt (you can listen to it on Bandcamp) and a full-length album nearly completed, tentatively due this summer.

Rosary Guild, which is Highway 81 Revisited’s new On The Rise artist, will perform Saturday, April 14, at the opening night of downtown W-B all-ages venue Karl Hall, along with Joe Burke and headliner Everything Turned To Color.

The upcoming album, which Rosary Guild is recording itself in the rehearsal space, represents “perhaps a slightly darker turn,” McHale shares. “It’s 11 songs, so it’s got its moments of shininess and it’s got its dark moments. It’s definitely a more rhythmic album for sure. … On the last album, we had dynamics and we’re going to continue with the dynamics, quiet stuff and loud stuff.

“Overall, I’d say the mood is being out in the woods at night. It’s pretty, but it can get scary.”

The music video for “Crocodiles,” from 2016’s self-titled EP

The band has performed at Northeastern Pa. spots like the River Street Jazz Cafe, The Bog, The Other Side and The Lamp Post (inside Downtown Arts) and plans to book some dates beyond NEPA in Philadelphia and New York once the album is out.

The trio’s layered sound requires some overdubbing in the studio, which means the live set presents some challenges.

“There’s going to be cello, clarinet, piano, guitar, vocals, drums, bass and who knows whatever else on this album. And it’s all going to be performed by us,” McHale says. “But obviously I don’t have that many arms to play it all live. We record as a three-piece but try to sound larger than a three-piece. … Because we rehearse and write the songs as a three-piece, we’d like to think [the songs] stand on their own as a three-piece, but we’re also working toward adding some extra elements on stage. We have some sampling and electronics and loops, and we will perhaps look into adding some live members to flesh out and bring out the songs. It’s a double-edged sword, where you don’t want to go too crazy with gimmicks.

Rosary Guild’s members have a deep appreciation for a broad range of music, some of which has obviously flavored the sounds they create together.

“I really do enjoy Sigur Ros, and Gerry, the drummer, and I are very into them and Explosions In The Sky and Godspeed You! Black Emperor. Things like that. Lyrically, I always appreciated Isaac Brock from Modest Mouse, Ben Gibbard from Death Cab For Cutie; I think that’s a band that doesn’t get enough credit, I think they get kind of pigeonholed.  Bands that kind of blend it all together where it’s sonic textures and lyrics would be Radiohead, The Smiths and The Beatles. Those would probably be the big three bands for me.”

While listeners will have to wait a few months to hear how those influences and the band’s experiences of the past few years have manifested themselves on the new recording, they will get a chance to see Rosary Guild perform this Saturday at Karl Hall.

“Karl Hall will be a really exciting show,” says McHale. “Just the vibe everyone talks about, wanting to have a good, solid, go-to venue back in Wilkes-Barre — it looks like we’re finally going to get it. We’re really excited and honored to play the opening night.” 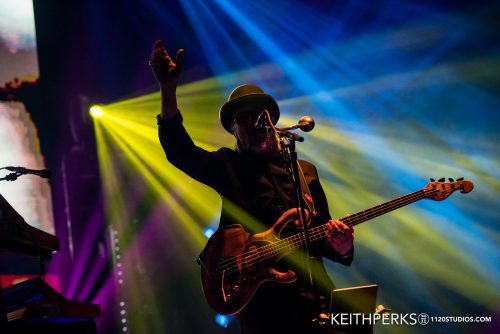