‘GUARDIANS’ PUTS THE COMIC BOOK BACK IN ‘COMIC BOOK MOVIE’

Given how little respect the subgenre of comic book movies receive from filmmakers, critics and audiences alike (right up until it became the most lucrative and beloved subgenre right around the turn of the century), it’s understandable that no one wants to make a comic book movie unless it takes itself seriously. No person or studio wants to be responsible for the tidal wave of vitriol that greeted “Batman and Robin” or “The Fantastic Four.”  Sure, these movies can still be funny, but silliness is largely off the table.  And on the whole, this trend towards serious storytelling has been for the good.  But there has also been a feeling of stiffness creeping into superhero stories, a filmmaking-by-committee sensibility where the object is less to thrill than to not offend. One needs look no further than “The Amazingly Bland Spider-Man 2” to experience the dulling effect of this outlook.

All high praise, then, to director James Gunn and Marvel Studios for “Guardians of the Galaxy,” a comic book movie that has the audacity to make sure that the “comic book” part of that phrase matters the most.  Only a few months after producing the best possible incarnation of a serious comic book film with “Captain America: The Winter Soldier,” the studio daringly allows Gunn to delve deep into Marvel’s vaults for some of its craziest and most outright fun characters.

A brief prologue set on Earth in 1988 details the backstory and abduction of Peter Quill (played as an adult by Chris Pratt), who grows up to be a renegade outlaw Star Lord (a name which only impresses him). Through a series of events entirely too convoluted to wade through in this review, Quill is targeted by and eventually arrested alongside three other misfits: Rocket, a sentient, machine-gun wielding raccoon voiced by Bradley Cooper, Rocket’s sidekick Groot, a giant tree creature voiced by Vin Diesel that can only declare his own identity ad nauseum, and Gamora (Zoe Salanda), a fierce warrior and not-quite-daughter of Thanos, a.k.a. the Big Bad glimpsed at the end of “The Avengers” and played here by Josh Brolin with a sadistic twinkle. Once in prison, the four non-amigos encounter Drax (Dave Bautista), a vengeful warrior with a particular interest in Gamora.

As a story resting on the outer rim of the Marvel Cinematic Universe (beyond Thanos and a quick glimpse of the Tesseract from “The Avengers” there’s nary a bit of crossover), there’s a lot of character and plot introduction happening here. The entire Guardians plot is set over the background of an alien war that is apparently coming to an end, much to the chagrin of Ronan (Lee Pace) a fanatic who wants to use the magical MacGuffin that Star Lord possesses to obliterate his enemies. Far be it for a sci-fi movie to overdo the exposition, but this whole subplot seems half-baked, and wastes the talents of terrific actors like John C. Reilly, Djimon Hounsou and especially Glenn Close as the leader of the good-guy aliens (they barely exist as characters so that’s honestly the best way to describe them).

Most of the problems, however, exist solely on the movie’s window dressing; whenever the focus is on the core characters, “Guardians” becomes awesomely entertaining.  Cooper, who is great fun as a smart-ass now that he’s shown that he can play more than a smart-ass, is hilarious as Rocket (his improvised prison escape is a thing of beauty), Salanda once again plays the outer space straight-woman role but at least here she gets to mix it up with the main characters as more than a simple scold, and professional wrestler Bautista invests Drax with a real sense of pathos and is the source of some of the movie’s best dry humor (his race is unable to understand metaphors or sarcasm). By far the best character is Groot, the friendly tree monster that is equal parts Ent, Chewbacca, Hodor from “Game of Thrones” and (thanks to Diesel’s vocal performance) the Iron Giant.

Gunn, a Troma veteran whose mainstream breakthrough was the Nathan-Fillian-vs.-alien-controlled-zombies horror/comedy “Slither,” directs with a wonderfully light touch, creating scenes that have an improvisational feel that must have been doubly hard to evoke when half the cast needed to be digitally added later.  Remembering that “comic” has two meanings, Gunn also makes this easily the funniest Marvel movie to date. Gunn also remembers the literal meaning of the word “marvel”: scenes set inside a mining colony made up entirely of a deceased giant’s skull, or a squadron of fighters forming a literal defensive net, elicit the same kind of breathtaking astonishment as “Star Wars.”

“Guardians” isn’t the best Marvel movie ever, but it’s the truest to its comic book roots (oh, and speaking of comics: stick around after the credits for a truly jaw-dropping cameo). 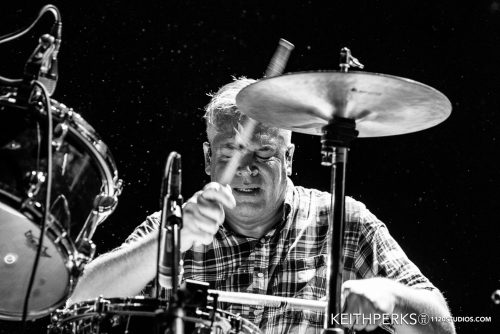