It’s a big world for Tiny Universe guitarist DJ Williams. A long-time member of Karl Denson’s Tiny Universe (fronted by its namesake sax and flute player and Rolling Stones sideman), Williams leads his own band, is working on a solo record and has branched into composing music for projects like the podcast “Life and ….”

The podcast is hosted by Williams’ sister, Tonyehn Verkitus, the executive director of the Lackawanna & Luzerne Medical Societies. The podcast, which is a partnership between the medical societies, Scranton Fringe and Park Multimedia, features a different guest sharing their personal story in each episode. The theme of season one is substance misuse, while season two will focus on isolation.

Chatting with us while on tour in Florida with an all-star band featuring members of String Incident and Goose, the Richmond native Williams talked about setting the tone for “Life and …,” his favorite podcasts to listen to and his work with Denson.

How did you get involved with the podcast?

My sister Tonyehn is part of that podcast, and she’s my biggest, I’m not biased to say, one of my biggest fans, and was the first one to approach me about doing music for the podcast. And as soon as she told me to do it, I already had ideas when she started telling me about the podcast and people telling real stories about their lives, and being a fan of podcasts and a fan of theme songwriting and just kind of writing music for setting the tone, I was ready to dive into this thing headfirst.

Had you done this type of work before?

So actually about in the beginning of January of 2019 until about two years ago I started working for Google as a songwriter for YouTube, I started writing songs for like skate videos and surfing videos, and I actually did a record of those songs. I was really into old spy movies and Westerns and I started to pay attention to the music from those old scores and started to dive into searching about who was making this music and what inspired them, and I went into this wormhole. I just really started getting into writing music for different themes and getting into cinematic scoring, so the timing was kind of perfect. That’s kind of what helped spark me getting the job with YouTube and sparked this whole new part of my career.

When you’re writing music for something like a podcast, how much do you need to know about the episodes?

Mostly what kind of tone it’s going to be. I like to keep it wide open, because when I start to overthink things I kind of put myself in a corner. I think everything should happen organically, and when you don’t overthink it is when I think you get the best work to fit whatever project you’re working towards.

You said you’re a fan of podcasts, which ones do you like?

I love Patton Oswalt’s new podcast. I love true-crime, murder mystery stuff, and Joe Rogan — because it’s so popular I’ve kind of shied away from it, but I’m really enjoying his podcast. And music podcasts, my friend Eric Krasno from Soulive has his “Plus One,” and he knows so many people in the industry, I’ve really been enjoying his podcast. 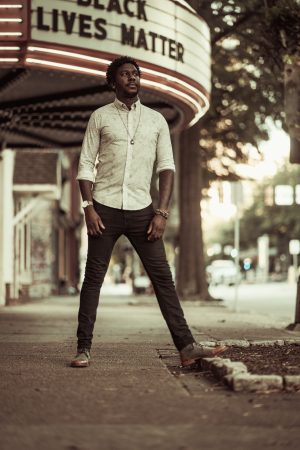 Tell me about your band Shots Fired.

I moved to LA in 2015, and I had my original band, the DJ Williams Projekt, and Shots Fired was going to be the West Coast version of that, and it turned into today rotating cast of about 54 members of this band. These musicians are of such a high caliber, I don’t have to worry about them, and the shows are never going to be the same.

How did you hook up with Karl Denson?

We opened up for his band, the Tiny Universe, in the summer of 2004, my band the DJ Williams Projekt. At the end of the night, he invited me up to play with him. Over the years he would always sit in with my band and vice versa. In 2011, when his guitar player left, [Denson] actually called me and asked if I wanted to start playing in the band. I thought it was my drummer playing a prank and I hung up on him. He called me back and said, ‘This is real.” And I’ve been with him since May 2011.

Besides KDTU and Shots Fired, what else are you working on?

I’m actually working on a solo record. I’m playing everything on it. I just finished shooting a music video. [The album is] called “Short Stories.” Around June or July, I had all this time. I started recording the album in my living room. It’s a lot more laid-back, more experimental and I’m singing a lot more. I wouldn’t say it’s a snapshot more than it is something I’ve wanted to do for the last decade and now I don’t have an excuse. Some of it is stuff that was on a hard drive, songs that I thought would never see the light of day.

A few years ago you had a harrowing experience after you were jailed in the United Arab Emirates for having a vape pen. (Williams opened up about it to High Times in 2017.) What did you learn from that experience? Is there any sort of teachable moment you’ve been able to share with others?

I don’t know about a teachable moment, but I know what I’ve learned for myself. The biggest thing I learned was a new sense of compassion. That might be the biggest thing I can take away from it. It was so dark. It’s one of those things in hindsight I’m not surprised I made it through that, because when you’re in that moment, you go into survival mode: All right, this is what needs to be done. So coming out of it, that’s what I learned, a new sense of compassion and a new sense of loving the freedoms that we have.

Do you have anything else to add before we let you go?

I’ve really been enjoying the podcast myself. Some of these stories have been really touching and eye-opening to hear, and I’m stoked to be a part of it.

You can listen to “Life and…” at www.scrantonfringe.org/podcasts or via the major streaming services, including Spotify and iTunes. Those interested in applying to be storytellers for Season 2 can click here.