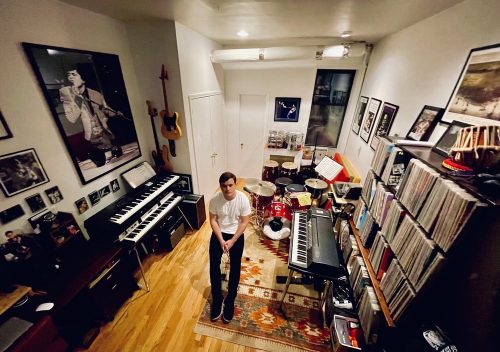 For Dan Klug’s project The Fundamental Sound, it’s all about simplicity. On his newly released album, “Lofi Grateful Dead,” he played just drums, bass and a Wurlitzer electric piano and kept the production to a minimum.

Klug recalled Daptone producer Gabe Roth (aka Bosco Mann) saying in an interview that you should never need to use more than two mics to get a drum sound. “It really stopped me in my tracks,” said Klug, a Brooklyn-based drummer and multi-instrumentalist who last year released “Lofi Christmas” also under the Fundamental Sound name.

When Klug started posting his lo-fi tunes on social media, an Instagram friend suggested he do a Grateful Dead song, “and it kind of took off.”

“I’m a Grateful Dead fan — definitely not a fanatic, and I say that out of respect,” Klug said. “Initially I had three buddies I was bouncing ideas off of: What do you think of ‘Tennessee Jed’ or ‘Althea?’ I got a final list of 14 songs I wanted to do.” Criteria included “basically the popularity of the songs in addition to the simplicity of recording it. Someone said you should do the ‘Terrapin Station’ suite … That’s a little too much for this project, but a tune like ‘Althea,’ for instance, is very popular, I think, for most heads, so I thought that could work very well.

“I’ve always liked the blues roots of the Grateful Dead, so ‘Bertha,’ ‘Sugaree,’ ‘Goin’ Down the Road Feelin’ Bad’ were really perfect for this vibe. And ‘Touch of Grey,’ a popular song from the ’80s, I included that intentionally to have a song people have heard on the radio.”

What about the reaction from Deadheads?

“So far so good. I was actually kind of nervous about it because it’s a pretty passionate fan base. And there’s a lot of opinions about music, especially cover music. I did have a couple older Grateful Dead fans [say] like, ‘You should never do this. The Grateful Dead are the ultimate touring band, they should not be lo-fi,’ and that’s totally fine. Another guy on Instagram said, ‘You make instrumental stoner soul.’ That makes sense. … I get it. There are so many Grateful Dead tribute acts out there, it’s a very personal thing [for fans].”

The Fundamental Sound played a gig on Oct. 21 in Pasadena, Calif., and Klug said he wants to do more. As part of a network of jazz musicians in New York, he explained that he plays with people he hires on relatively short notice who are quick learners. “The drum part, I can tell people play either ‘Funky Drummer’ by Clyde Stubblefield or Hard ‘Knock Life’ by Jay-Z. That’s the amount of preparation that usually goes into it — hire good people to play simple music.”

With the Christmas and Dead albums released, Klug’s next release will be an album of his original music, which he said occupies “literally the same sonic space that you hear on ‘Lofi Christmas’ and ‘Lofi Grateful Dead,’ just original music, the sane concept, me recording in my apartment in Brooklyn.”

Like the covers albums, the original one will be released on Klug’s appropriately named Room Sound Records, which has also released music from his bands The Consecutives and The Century Band.

Klug credited a few artists for inspiring him to be a a self-contained entity who leads his own studio, label and promotion.

“The band that really made me realize a lot of things was Jack Stratton, he is Vulfpeck. A producer, musician, internet guru, it seems he really gets it. I remember listening to the first Vulfpeck stuff and realizing he was my age and going, ‘Oh man, this is what I should be doing.'”

ED RANDAZZO RECOUNTS A DECADE OF SONGS ON ‘WHO’S THAT MAN?’