When a bandleader in the jam universe needs a guitarist, they call Neal Casal. A member of Chris Robinson Brotherhood, a frequent collaborator with Phil Lesh and an alumnus of Ryan Adams’ beloved band The Cardinals, Casal has the ability to fit into countless musical scenarios, add his own flavor without dominating the mix and, maybe most important, get along with strong-willed leaders.

That said, the mission presented to him in 2015 by the Grateful Dead camp was “an incredibly tall order,” even by his standards: The Dead were about to play a series of farewell shows near San Francisco and in Chicago, and filmmaker Justin Kreutzmann, the son of Dead drummer Bill Kreutzmann, needed original music to accompany video vignettes that would be shown during the set breaks at the stadium concerts.

“He requested music for five shows in total,” Casal recalls. “He asked me to have enough music that he wouldn’t have to repeat anything. I did the math on that, so it came out to five hours of music. That’s an incredibly tall order, pretty much impossible to do. We just decided to give it a shot.”

Casal put together a group of like-minded players, including his CRB bandmate keyboardist Adam MacDougall, and they took to the studio, forming an ad hoc instrumental band they’d call Circles Around The Sun and tracking a debut album they did not intend to make.

Less than three years later, CATS has two albums and a few tours under its belt. They’ll kick off a run of dates supporting Greensky Bluegrass at The Met in Philadelphia Friday, followed by a show at the Beacon Theatre on Saturday.

“Let It Wander,” the sophomore album, finds CATS taking a more measured but no less spirited approach than the debut record, “Interludes For The Dead.”

“The spirit of the band is to keep it open,” the guitarist says. “The band was founded on that principle and will remain on that principle. We wrote everything in the studio again; there were a couple things we created in advance. … It was similar to the first album, except that we took a lot more time. We made less music and spent a lot more time. There were no overdubs on the first album and minimal overdubs this time. 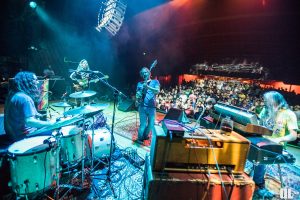 Casal credits Lesh, the Dead’s bassist, with educating him in the ways of Dead-style improvisation. Casal has been a member of Lesh’s rotating Phil and Friends band lineups.

“It was true of both Adam and I, and we started playing with Phil in 2012 and I did a lot of intense studying with him, played many shows with him. I really had to learn almost the entire Grateful Dead catalog and kind of was put through the Phil Lesh School of Music. He’s the sweetest guy, but he’s demanding and really asks for the best of people and asks for more than people may have to give. You have to dig deep to play for him.

“We never would have been able to make [CATS] music without playing with Phil. I’m very, very thankful for him to do that. He’s a great human being and such a great musician and a great mentor and teacher.”

Lesh and Dead guitarist/vocalist Bob Weir are known for different musical modus operandi. Weir now plays in Dead and Company, while Lesh leads his own projects.

“Bob likes it slower, and Phil likes it faster, put simply,” Casal says of their tempo preferences. “They’re very different people and very different musical approaches. They’re both great, both valid and I like both, but I’ve worked with Phil a lot more and consider myself in the Phil camp.”

The bandleaders he’s worked with — Lesh, Robinson and Adams — “are similar in a lot of ways,” he says.

“Just really strong-willed people who know what they’re after and will stop at nothing to get it,” Casal explains. “Rather than focus on their differences, I think their similarities are the things to talk about. I’ve seen it with Ryan, with Todd Snider [in supergroup Hardworking Americans] and with Chris: people working at their craft all the time, and they’re going for it. That’s the commonality between these people.”

Another famous musician in the Circles Around The Sun orbit is a head-scratcher until you hear the backstory: Chuck D of the legendary political hip-hop group Public Enemy, who raps an intro on “One For Chuck,” the second track on “Let It Wander” — the only vocals on the album.

“The studio where we recorded both records is very close to where I live in California, and Chuck D lives nearby and works in that studio frequently, and I had heard of him coming to that studio for a few years but I had never actually met him,” Casal says. “One night, while taking a break from recording, we were standing outside relaxing, and a black car pulled up and out stepped Chuck D. He came in, met us and heard some of the music we were making and was very complimentary and a super nice guy.

“After he left, we came up with the idea, wouldn’t it be amazing if Chuck D could maybe do a little intro or toast on our tunes? And he very graciously went for it. So he’s kind of a local artist,” Casal says, laughing.