At the stroke of midnight on Sunday, which would have been David Bowie’s 70th birthday, a video from “No Plan,” a song from his final album, “Blackstar” was released.

Also was released, according to the New York Times, was “a brief EP of previously released tracks were made available late on Saturday, almost exactly a year since the release of the musician’s final album, “Blackstar,” and days before the first anniversary of his death on Jan. 10.”

You can watch the video for “No Plan” below.

THE MAGPIE SALUTE partnered  [Jan. 5] with Yahoo! Music to premiere their performance video of “Comin’ Home” that begins with a tribute to the late keyboardist Eddie Harsch who passed away November 4, 2016. Eddie was set to perform with the band during their upcoming four night, sold-out engagement later this month at the Gramercy in New York (January 19, 20, 21, 22). The video was filmed in Woodstock, NY in August 2016 and features Eddie talking, rehearsing and subsequently performing the classic “Comin’ Home”–popularized by Delaney and Bonnie with Eric Clapton in the ’70s–with THE MAGPIE SALUTE.Watch the video here. 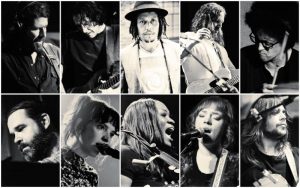 “This recording came from the last time I got to play with Eddie Harsch,” says Rich Robinson. “He was my friend and musical teacher. His mastery and subtlety will forever be an inspiration. RIP Eddie.”
THE MAGPIE SALUTE is an exciting new band that brings together three key members of The Black Crowes–guitarist/vocalist Rich Robinson, guitarist Marc Ford and bassist Sven Pipien–as well as members of his own band, drummer Joe Magistro, keyboardist Matt Slocum, and guitarist Nico Bereciartua. In addition, Rich has pulled together a fine cast of vocalists, including lead singer John Hogg (Hookah Brown, Moke), former Crowes singer Charity White and two additional background singers, Adrien Reju and Katrine Ottosen. From the start (October 2016), the band was embraced by music fans when they instantly sold out their first-ever show in NYC (January 19, 2017 at the Gramercy Theatre). When three more shows (January 20, 21, 22) were instantly added due to popular demand, they immediately sold out as well.

The Wood Brothers (guitarist Oliver Wood, bassist Chris Wood, and drummer Jano Rix) on Jan. 13 will release “Live At The Barn,” recording on Aug. 19, 2016, at Levon Helm’s Midnight Ramble.You can hear the Wood Brothers’ rendition of The Band’s Ophelia, which was premiered by Rolling Stone, below. 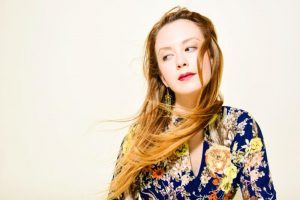 Natalie Cressman has announced that she will be releasing a new EP, “Traces,” on March 3.   The EP brings together a live band with electronic elements, and a press releases declares, “The combination of sounds leaves the album with a refreshingly danceable and indie-modern vibe.”
Cressman, a long-time trombone player and vocalist with the Trey Anastasio Band, will release the album’s first single, “Radio Silence,” on Jan. 24
Natalie and her band will perform at halftime during the New York Knicks game at Madison Square Garden on Jan. 27.
Read our 2014 interview with Natalie Cressman here.
REGIONAL VENUES MAKE POLLSTAR LIST
Concert industry trade publication announced its list of Top 200 theaters based on ticket sales in 2016. New York City’s Radio City Music Hall finished second, with more than 1.2 million ticket sales. Other venues in our area that made the Top 200 include Academy of Music in Philadelphia (59th with 129,059 tickets sold), the Capitol Theatre in Port Chester, NY (60th at 127,258), the Keswick Theater in Glenside, PA (106th with 62,101) and the FM Kirby Center in Wilkes-Barre, PA (109th with 60,437).
The Kirby Center broke into the Top-200 listing for the first time in 2015, coming in at 114.  The venue moved up five spots in 2016 by selling more than 60,000 tickets, nearly 7,500 more than its total for 2015.

“We’re moving on up, and that’s always a good feeling,” Will Beekman, the Kirby Center’s executive director, said in a press release. “We still have our sights set on the Top 100.  We’re getting closer.”

According to the publication, the Kirby Center ranks sixth among Pennsylvania theaters.

“We’re proud to share the list with so many larger venues located in larger markets,” Beekman added.  “Those are our friends and colleagues, and we congratulate all of them.”