Scranton’s Tigers Jaw has been making noise in the region and beyond since its 2006 debut “Belongs To The Dead”(Summersteps Records), honing its sound and expanding its reach with a self-titled album on the now-defunct Prison Jazz Records and 2009’s moody masterpiece “Spirit Desire”(Tiny Engines). Combining lo-fi indie influences with an almost-emo pop/punk feel, it’s no wonder the band — Adam McIlwee (guitar/vocals), Ben Walsh (guitar/vocals), Brianna Collins (keyboards), Dennis Mishko (bass) and Pat Brier (drums) — has acheived steady growth, both on its tours and in its recordings, including its most recent one, “Two Worlds.” “Two Worlds” was released last November on Run For Cover Records.

Tigers Jaw has a pair of local shows on the immediate horizon: this Friday, March 11 at a new venue in the Wilkes-Barre area called Redwood Arts Space (740 Jumper Road, Plains). A slew of other bands, including Balance and Composure, Make Do And Mend and Eww Yaboo, are on the show, with doors opening at 6 p.m. And on March 25, Tigers Jaw will perform at Eleanor Rigby’s (Route 6, Jermyn).

You can stream “Smile,” from the new Tigers Jaw album, below.

Make Do And Mend, from Hartford, Conn., is touring behind its well-received debut “End Measured Mile.” The band landed on Alternative Press’ 2001 100 Bands You Need To Know list, will perform at South By Southwest this month and play the UK with Firecracker. Make Do And Mend will also play the Krazyfest and Rainfest festivals and perform May dates with Hot Water Music. 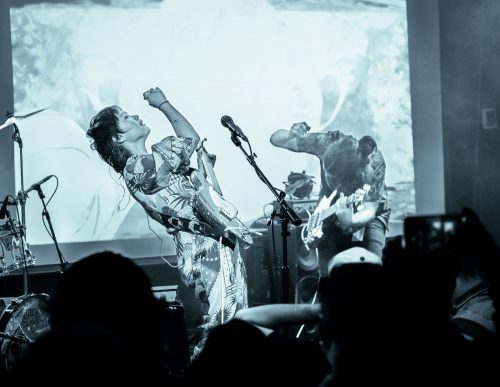