If it wasn’t for the huge sponsor banners and “gourmet” food trucks parked along the outer edges of the East Side Drive-In, the lot would look like any other godforsaken abandoned square of land in East Austin. The Texas sun was particularly brutal, and dust swirled in the wind and coated the lower half of the crowd at the second day of the Pitchfork Offlineshowcase. A cool breeze relieved the decently sized crowd as Yuck, the rising rockers from London, took the stage. Probably unintentionally clad in various hues of denim and faded blues, any awkwardness in appearance and stage presence is more than made up for in the coordination and tightness of their sound. Despite the heat and some technical issues, they played a strong 30-minute set.

Citing bands like Dinosaur Jr. and Neutral Milk Hotel as influences, early-’90s rock certainly shines through on tracks like “The Wall” and “Georgia.” Gloriously shoegaze-y and with heavy chords, “Rubber”proved to be a crowd pleaser, being especially entertaining to watch while bassist Mariko Doi’s entire face disappeared behind what is best described as an overgrown bowl cut. (Drummer Jonny Rogoff sports a Bob Ross-esque afro, while frontmanDaniel Blumberg’s curls form asymmetrical geometric shapes, rounding out a lineup of truly entertaining coifs.)

Like Blumberg’s shape-defying curls, the band’s sound also eludes a fixed definition. At times drifting from the lo-fi and grungy to something reminiscent of even earlier sounds, like a sunnier version of The Smiths — at all times owning their sound and never once revealing a hint of immaturity from their youth (Blumberg is barely 21). 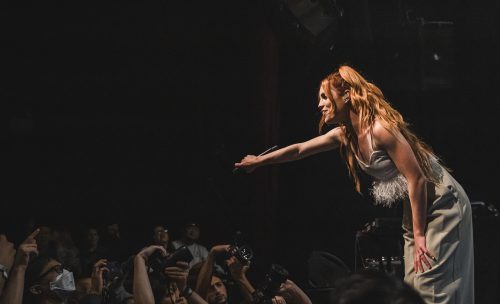 LANGOR: “SET ME FREE FOR CHRISTMAS”