This is not a concert review. It’s a story about a road trip with friends, an experience that was relaxing and enthralling at the same time, complete with an unforgettable soundtrack.

For the past year, I had heard Jim Gavenus tell me about seeing Levon Helm play at “a pumpkin patch.” It sounded to me like the coolest thing in the world: a free show at the Gill’s Farm Fall Festival in upstate New York, with the legendary Helm of The Band performing.

Two Sundays ago, Brian Craig, Bill Orner, Mike Quinn and I drove from Scranton to meet Jim at Gill’s for this year’s festival. We found Jim, on the grounds in Hurley, N.Y., about 20 minutes away from Woodstock, right where we expected: in front of the stage, wearing a broad smile, his camera at his feet.

When Levon’s band started to set up, I noticed a gray-haired gent with sunglasses tinkering with keyboards and recognized him as Steely Dan’s Donald Fagen. And when the band took the stage and barreled into The Band’s “Look Out Cleveland,” I noticed one of the players was Jim Weider, the post-Robbie Robertson Band guitarist. With Fagen and Weider involved, the ante was upped. Later in the set, Gov’t Mule keyboardist Danny Louis joined in, too. 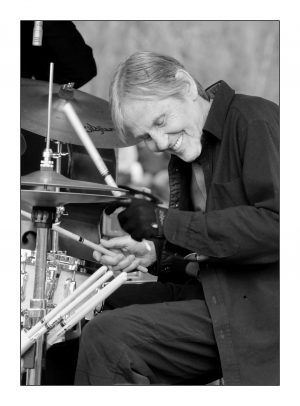 The whole day was jubilant, an end-of-summer celebration you can’t always have in your own backyard, really; sometimes you have to drive an hour or so just to get away from everything and bask in the glow of the otherness of another locale. It also doesn’t hurt to hear “Long Black Veil,” a New Orleans funk version of the Grateful Dead’s “Shakedown Street” with Fagen on lead vocals, other Dead favorites like “Tennessee Jed” and the traditional “Deep Elem Blues” and Band chestnuts like “King Harvest (Has Surely Come).”

The thing about live music, though — and this is going to make me sound like a hippie — is that it’s a communal experience. I’m sure this show will sound great if I hear a recording of it, but you can’t record, digitize and distribute the in-the-moment interactions with your buddies as you’re sharing the experience. You just have to be there.

The performance was one none of us will ever forget, but the journey to and from Gill’s was memorable in its own right. For the return trip, we picked up another Scranton traveler, J.P. Biondo, who leapt right into the banter we’d been tossing back and forth all day. We had a great meal at a restaurant outside of Hurley, and later Brian’s leftovers got housed by a cat outside Bill’s house; hearing Brian repeatedly yell “Scumbag cats!” in the dark was almost as good as hearing Levon tear through “Ophelia” with a horn section. Almost.

I’ve admired Levon Helm for quite some time, and that respect has grown over the years since I saw him play a knockout set opening for Phil Lesh and Friends at Penn’s Landing in Philadelphia and read his riveting book “This Wheel’s On Fire.” He just seems like such a cool guy. He plays Midnight Ramble shows at his home studio in Woodstock. The night before the Gill’s show his guest performers were the guys from My Morning Jacket. And past guests have included Elvis Costello, Norah Jones, Kinky Friedman, Medeski Martin & Wood, Bruce Hornsby, Warren Haynes, Mitch Ryder — the list is wild, and I bet the list of great artists on the waiting list is impressive as well.

In Hurley, Levon’s toothy smile was infectious. Between songs he’d lock eyes with a fan and give him or her a thumbs-up. When he and his band were done with their set, he shook a few hands before his big dog bounded onto the stage and jumped on him. On this autumn afternoon, you felt like you were getting to know this man, this woodsy genius from Arkansas who made his name in a Canadian band that’s as American as anything we’ve ever produced ourselves. A man of principle that was ready to abandon The Band’s last show, dubbed “The Last Waltz,” when Robertson told him to un-invite Muddy Waters. I love his work ethic and his straight-shooting nature as much as I love his inimitable drumming.

I think as long as Levon keeps playing at Gill’s, we’ll be back each year. Whether or not the scumbag cats abide.

Originally appeared in the Weekender/theweekender.com Oct. 26, 2010.

A SOCIAL STATE GEARS UP FOR VINTAGE ANNIVERSARY