For many artists, it takes a few albums to find their footing. But Ra Ra Riot frontman Wes Miles knew when the band was recording debut album “The Rhumb Line” that its melodic and melancholic mix of upbeat indie rock and chamber pop might be hitting at just the right time.

“Actually, I felt like at the time we kind of had our finger on the pulse quite a bit,” Miles tells Highway 81 Revisited in a recent phone interview. “I think we knew that we were kind of striking a chord, or that you can be immensely talented, and so many people in music are, but the thing doesn’t work out. I think we had a feeling that the timing would kind of work for us. It’s hard to say.”

Released 10 years ago this week, “The Rhumb Line” earned its indie bona fides, with a solid review from Pitchfork and pages and pages of coverage from Stereogum. The record even edged into the mainstream, making Rolling Stone’s top 200 for the year (at No. 109), cracking the Billboard 200 and getting a review in Entertainment Weekly.

The group, formed at Syracuse University — which completed the album in the wake of original drummer John Pike’s death — is marking the 10-year birthday of “The Rhumb Line” with a handful of shows, including Friday, Aug. 17, at Elsewhere in Brooklyn, where they’ll play the record in its entirety.

While songs like “Ghost Under Rocks” and “Dying Is Fine” have been part of Ra Ra Riot’s repertoire for a decade, delving into the entire album should bring back some powerful memories for the band — which in addition to Miles features Mathieu Santos (bass), Milo Bonacci (guitar), Rebecca Zeller (violin) and Kenny Bernard (drums).

“We’ll all probably have a lot of emotional moments thinking about creating that record with John, our original drummer,” Miles says, “and just being young and stuff and all the drama that is in your life when you’re in your early 20s. So I think it’ll be a really intense experience but I’m looking forward to it.”

We spoke with the vocalist before the band had convened for rehearsals, but it seemed effortless for him to recall the inception of the record and its accompanying emotions.

“When we started, we kind of started as like a house party band in the very, very early days,” he says. “That kind of seeped into our mentality for everything at the time. It was kind of about making a wall of sound and everybody [at the parties] was being busy and doing stuff at the same time. And then just touring constantly, no breaks almost. It kind of feels like we toured for the first three years that we existed, almost nonstop, only breaking to write and record, so it was kind of a whirlwind.”

“The concept is sort of there’s an extra record, right, so it’s a 2-LP set and the second record, one side is all alternative demos, like an alternate-universe ‘Rhumb Line’,” Miles explains. “There’s a couple songs on ‘The Rhumb Line’ that I had started writing with Rostam [Batmanglij], like ‘Can You Tell,’ and then there’s a song that I played on ukulele that was before the band started, before I had met half the band. So it’s kind of like a cool, different time.” The first side of the second LP shows the length and breadth of the band’s collaborative relationship with Batmanglij, the former Vampire Weekend member and half of the duo Discovery with Miles, Miles notes. 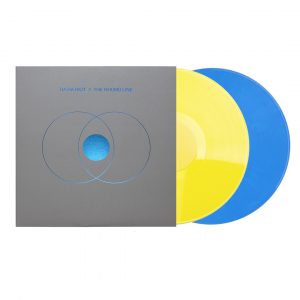 At the end of side one, “there’s a moment when we’re playing a Daytrotter session, I think it was ‘Oh La,’ and it’s kind of a different version, and I think it’s the first time we played with Gabe Duquette, our drummer at the time and sometimes collaborator now,” Miles says. “So so you can hear some of the studio talking. I wanted to get that vibe of always changing stuff, and like any other band joking a lot. And you hear the door close and that’s the end of side one. And then when you flip it over, we’re imagining you’re going through the studio through some back room to some backstage maybe, and you hear the stage but it’s filtered and sounds far away and then it opens up.”

Which transitions nicely to the second side of the second record, which is all live material. “So there’s some songs that are from maybe our first show in LA ever;  I think that happened to be the most pristine artifact of the live show at the time. And there’s a couple from house parties that really feel kind of wild and fun.”

While Ra Ra Riot obviously put considerable time and thought into the reissue, new material is in the works as well. The full-length album will be the band’s first since 2016’s “Need Your Light.”

“There have been plans, and they’ve been fulfilled, mostly,” says Miles. “We’re wrapping up, hopefully pretty soon, our fifth record, and I think if all goes according to plan we’ll probably play a song or two at these shows, and that will be pretty exciting; looking back is not really useful unless it’s helping you move forward.” He says the band hopes to have a song out by the end of the year and the new LP out in 2019.

Asked about Discovery — which to date has only released a self-titled album and performed one song live as a duo, three times — Miles notes that 2019 will be the 10th anniversary of that album.

“We’re considering trying to make something happen with that,” he says. “I mean, that’s the 10-year of that, so that’s pretty fun. We’ll see if maybe we can get something together. We’re always working together, which is fun. Whether it goes into this creative outlet or that one is kind of secondary to making music the best that we can, but that would be a fun project [to make] into maybe a full show.”