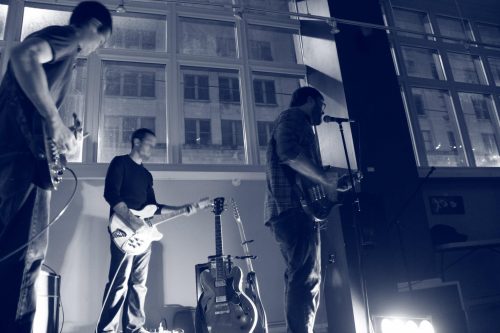 Scranton indie rock band Kid Icarus will play its first show in seven years on Saturday. And like the last time the group performed together, it’s a city event that’s bringing the boys back together, this time the NEPA Horror Film Festival.

“Bobby [Keller], who’s doing the horror fest, emailed me about possibly doing the gig,” says Kid Icarus founder Eric Schlittler. “It was something that really feels like the right time to see if everybody would be game to do something because it had been so long. It was that ask that really put things into motion.

“Now that we’re rehearsing, it feels like I had chopped an arm off and it grew back.”

Schlittler is reprising the Kid Icarus lineup from the last gig in 2014, with brothers Joe and Justin Marchegiani on bass and guitar and Jeff Gilotti on drums.

When it came to mapping out a setlist for Saturday, Schlittler joked, “If I ever had any success, this would be the greatest hits.” He said he focused heavily on 2011’s “American Ghosts” album because “I felt that they were the best-built of the songs I had done…and they’re rocking.” Then the other band members cherry-picked at least one song to play.

Kid Icarus last performed at Arts on the Square in downtown Scranton on 2014.

“It was such a nice gig we played at Arts on the Square that it felt like a good place to end things at the time,” says Schlittler. “I knew it was going to be a break.” He had recently had a daughter then a son three years later. “It wasn’t really a thing about any lineup that we had at the end. I really loved all of the guys.”

Schlitter played in his first band, Suetta , the name taken from the maiden name of his mom and last name of his grandfather, whose mobile home sales lot in Moscow, Pa., housed their practice space. After graduating from North Pocono High School and continuing on to University of Scranton, Schlittler began recording under the Kid Icarus banner. He still lived at home.

“Being a commuter fed into my isolation,” he said. “I wasn’t really one of them. I was kind of a townie.” 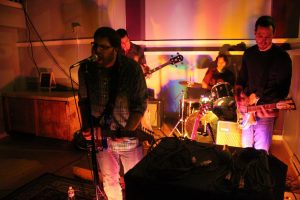 And yes, he named the project after the Nintendo game. “I had just started college and felt kind of lost,” he recalls. “The group that I was in, we had kind of gone our separate ways. I was playing a lot of Kid Icarus, and I thought that’s a got a nice ring to it.”

With various lineups, the band would go on to record “four of five albums, a bunch of tapes and EPs,” says Schlittler, who also runs the label Summersteps Records, which has released much of the Kid Icarus output. Seven years ago, Hope for the Tape Deck released a 15-song Kid Icarus compilation called “Dig Archaeology: Thirteen Years of of Lost Songs 1999-2012.” The band’s most recent new material came in 2013 in the form of a split release with the band Cold Coffee on Stress Carrier.

As for whether more Kid Icarus recordings or gigs are on the horizon, the answer appears to be a firm “maybe.”

“I would maybe like to keep the door open to it,” Schlittler says. “I would say right now we don’t have anything line up. I’m interested in writing some material and maybe playing some gigs. It’s tough. I’m not young, but I’m not old either. You get to a certain age. It might be good to keep it like an every-once-in-a-while thing because people could get a little excited about it.

“I found this cool Rhythm Ace drum machine, it might nice to come up with a set of stuff to present to everybody. It’s nice to sometimes have that time to connect with people on a musical level, especially with the pandemic and everyone so glued into their own little pods. I definitely love playing with the guys and definitely would like to possibly keep the door open as long as everyone is OK with it. And if this is the last thing we do, then great.”

Photos of Kid Icarus, live at the Vintage Theater, Nov. 10 2012, by Matthew Marcinowski

Newer PostLUCERO MAKES HEARTBREAK AND WHISKEY SOUND LIKE HEAVEN AT MUSIKFEST CAFE
Older Post EXCLUSIVE: THE MINUS WORLD TAKES ON DAVID BERMAN’S ‘MARGARITAS AT THE MALL’