Jason Falkner is a long-time member of Beck’s band who has collaborated with the likes of Paul McCartney, Glen Campbell and Air. But the opportunity to work with lo-fi legend R. Stevie Moore was a big deal, even by Falkner’s standards. Earlier this spring, the duo released the studio album “Make It Be,” which combines Moore’s off-the-wall approach with Falkner’s pop sensibilities, which first came to notice during his membership in the ’90s power pop band Jellyfish.

We recently reached Falkner at his California home to chat about his partnership with Moore and working with some of music’s biggest names.

What did you know about R. Stevie Moore before you started working with him?

I first became aware of him via that 10-inch record called “Revolve.” I saw that in a record shop here in LA that was closing, just trying to get rid of all their inventory. I saw this wacky record cover of the Beatles’ “Revolver” with this odd-looking man with octagonal glasses and said “What the hell is this? I’ll definitely take that!” And I went home and kind of freaked out about how good it was. I had never heard him prior to that. There was kind of a public-access quality to it (laughs), very homemade. But I loved it, so I then just started to find his vinyl and original pressings of “Phonography” and “Delicate Tension” a few years later.

I remember one of the early things that Ariel Pink and I talked about, who’s been a friend of mine for like 18 years or something, and he was playing stuff of (Moore’s), and I was insanely blown away by his home-recording stuff. Driving around one very, very early morning, and I was like, “What are you into?” and he said, “I’m really into metal and this guy R. Stevie Moore,” and holy shit, he was the only guy I’ve heard mention that name. That was kind of a bonding thing for Ariel and me and also solidifying my impression of R. Stevie Moore.

How did you and RSM meet?

I guess back in the early days of MySpace, I believe Stevie sent me a message, and I’m not really of the generation that gives a shit about social media and stuff, and I kind of still don’t, but it never dawned on me you can reach out to people you are fans of. I thought it was just for people you know. So when Stevie reached out to me, I was like, Oh right, I can reach out to like Tom Verlaine and stuff. We kind of started a mutual admiration society back then and sending each other notes. He still sends me these amazing care packages of crazy releases of his over the decades.

Then he came out here to do the “Ku Klux Glam” thing with Ariel [Moore and Pink’s 2012 album], that’s what basically planted the seeds to do a duo of our own. I was just kind of helping them, playing drums and some guitar and recording it and mixing it. We said, We gotta do one of these too.

You’ve collaborated with a lot of musicians over the years. What is unique about working with Stevie?

I mean, there wasn’t really any kind of new approach that I kind of gleaned from Stevie or anything. Some people are saying “Jason legitimized Stevie’s thing” and “Stevie opened up Jason’s weirdo cabinet” or whatever, and that’s just lazy shit right there. I always had that aspect to what I do that is wildly experimental, it’s just not at the front of the mixes. If you listen back to my first solo record, there’s a lot of weird meandering-sounding stuff in the context of a well-packed song. That’s something that’s always been very important to me. I want something tugging at it, fucking with it. I didn’t legitimize shit. I just might have made the best sounding recording that he’s been involved with. It’s still a very lo-fi record. It’s kind of mid-fi, like hi-fi from 1976, which is not hi-fi by today’s standards. 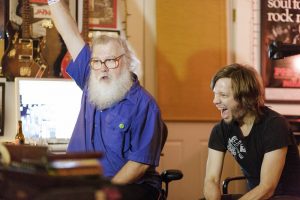 What was it like working with Paul McCartney on his album, “Chaos and Creation in the Backyard” (2005)?

That was obviously insane. I’m not really like a session guy. I don’t do 80 percent of the session stuff I’m called about. I don’t really enjoy doing it that much, but of course depending on the project; when the Paul McCartney thing came around, it was a no-brainer.

I have tons of cool amps and pedals, but I don’t always know if they’re working, unlike a session guy. I showed up at Ocean Way Studio and I had like a ’58 Fender Vibrolux Tweed Fender Amp but again didn’t really know if it was working properly. I brought like a Fender Super Reverb as well. So I knew that McCartney was going to show up. I showed up around 10, and he showed up at 12. I check out that amp, and it sounds phenomenal. But I didn’t have a tuner with me. That’s not very professional, so I started getting like insecure. Then I get this tap on my shoulder, and it’s Paul, he’s right in front of me. I thought I was mentally prepared to meet Paul McCartney; I’d met some gnarly people, the fact is, he’s the most gnarly. As soon as I look up, he says, “You must be Jason.” I literally got what people describe as the elastic knees, I thought I was going to fall over. …

It was just my station, we had a grand piano, Wurlitzer, my basses and guitars and all pedals and a chair facing Paul’s station with grand piano and Wurlitzer. Basically, they were mirror image stations. So right away he says, “Let’s get into it.” He started playing something on acoustic guitar or piano, and we just learned the thing and started recording it. Within an hour of meeting him, we were recording. I was playing acoustic and he was playing bass — and yes, it was his Hofner bass — and James [Gadson] was playing drums, and it was maybe the second of third pass at this tune, and I completely knew it. But I looked up, and I kind of got lost in the song, and I look over and Paul is doing that thing where he’s trying to get my attention, and he mouths, “Where are we?” I had fucking no idea, I just totally fell apart. It was hilarious.

And obviously you’ve been working with Beck for 20 years.

We met like way back in the “Odelay” days, or maybe right after “Odelay.” Whatever that is, ’97. And I used to see him at parties. He was like, “Yeah man, we should do something together,” and I thought he meant both of us as artists, but he more meant I should join his band (laughs). I kind of resisted that for a long time.

I guess the first recording I did for him was “Paper Tiger” [from 2002’s “Sea Change”]. That was a very successful first thing we worked on together. I remember the first day I was in the studio with him, I was making some suggestions for arrangements, and he liked them. Other guys in the band were looking at me like “you dick,” they thought maybe I was getting special treatment in their eyes. And I’ve been on every record of his since then, and I’m not playing on the new one he’s working on. The first thing I did with him  live was “SNL” and Letterman in the same trip. That was for “Sea Change.”

What else are you working on now?

I’m doing my solo record right now, my fifth solo record. And I’m going to be producing this guy Pugwash. He’s a friend of mine from Ireland. Then Beck touring stuff in the summer.