WILKES-BARRE, Pa. — The excitement was palpable in the well-lit lobby. When the house lights flickered, groups of people started cheering. That’s the positive energy the Indigo Girls give and provoke regularly from their fans and Sunday, March 20 at the Kirby Center was a prime example.

The Indigo Girls have a loyal following, according to the sound tech. He was overheard saying he sees familiar faces every night. The opening act started fairly promptly at 7:32 p.m., and after the crowd swelled to its full 911 attendees, the main event with Emily Saliers and Amy Ray began at 8:33 p.m.

The Indigo Girls have been performing together since 1985 since they were in high school in Decatur, Ga., which is evident by their synchronicity. Both Saliers and Ray add something distinct, yet neither one outshines the other, both instruments blending perfectly into one magical escape. Even for someone who doesn’t care for the folk rock genre, the musical talent of the two women is undeniable.

The duo opened the show with “Swamp Ophelia’s” “Power of Two,” joined by a third musician, violinist Lyris Hung, who played throughout the one-set-long show. The fans were wildly excited but respectful of the space and their fellow fans. Some stood, many cheered, and one even gave the Dio heavy metal horns. She was seriously ready to rock. The interaction with the audience was immediate as Saliers and Ray invited the crowd to join in and sing the chorus. 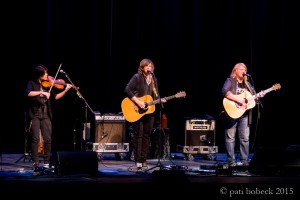 As the set progressed, there were many instrument changes including banjo, bouzouki and a ukulele which was used in the second song, “Yield.” Saliers oozed a soft, maternal energy while Ray stood in a wide, powerful stance adding her deeper vocals – part of the Indigo Girls signature.

Saliers and Ray took their fans two years forward to 2004 with “Fill it up Again,” followed by recent single “Fishtails” with Saliers on electric guitar. The crowd continued to cheer and talk to the performers between songs. Before starting “Fishtails,” someone in the audience proclaimed their love for the entertainers. Saliers responded softly, “We’re grateful for ya.”

Saliers paused between songs to tell the audience a story about her employment at a Kroeger grocery store “a while ago.” She recalled her mustard-colored uniform. “There’s another can of beans,” she recounted. “There’s another bag of carrots. So I got depressed about that.”

She added, “I didn’t know… I didn’t know shit,” before launching into “Cold Beer and Remote Control.” Next was the high-tempo, powerful “Damo,” which Ray said she wrote for a man from Dublin named Damian Dempsey. After the song, Ray looked over at Hung and exclaimed, “That was awesome!”

The love and appreciation between the singers and the audience ran through the entire night. Audience members would shout requests or say “thank you” and the Indigo Girls would reply. Nineteen-ninety’s “Hammer and a Nail” and 1992’s “Ghost” were heavily requested by the crowd. When 1987’s “Blood and Fire” was requested multiple times, the response from the stage was finally, “Some are best left in the sentimental category.” When every song started, voices could be heard saying, “This song is the best!” or “They are so good!” Every song played was declared someone’s favorite and some fans had more than one favorite. The crowd reeked of excitement. Fans danced when they wanted to or bopped in their seats. It felt like a night of friends – if your friends play guitar and have kickass harmony. 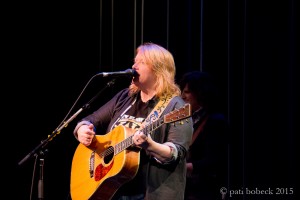 As song requests continued to pelt the stage, Saliers explained that she wasn’t going to sing certain songs because of her case of “crud.” Ray told the audience that her stage partner was performing with bronchitis. “I just don’t want to fuck it up,” Saliers said, “and I will.”

By “Get Out the Map,” the dancing had gone from the seats to the aisles, which was not cool with security. The dancers were gently encouraged to return to their seats. The duo moved the show along with “Country Road,” the engaging “Love of our Lives” and “Come on Social’s” first track, “Go.”

Ray introduced “Angola 3” by recounting a letter she received from a man named Herman Wallace, who was in solitary confinement for 35 or 40 years. Ray explained that Wallace, an African-American, had been incarcerated in 1973 with two other African-American men: one who was released after an appeal and another who was allowed compassionate release before dying of cancer a few days later. Ray said Wallace got his conviction overturned after “criminal system acrobatics,” and her message that the “system is racist” and her hope “to change that” came through in her raw vocals, the uplifting violin and the juxtaposed soft, dark deepness of the music.

Ray then left the stage as Saliers sang “If I Don’t Leave Here Now,” accompanied by Hung’s violin. Saliers’ voice was soft, and with her blond hair under the stage lights, she looked angelic in a sweatshirt and jeans. 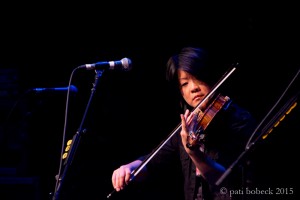 Ray returned to the stage for 1989’s “Shame on You,” and the crowd stood and danced again. Saliers thanked the crowd for coming to the show. “Thank you for coming,” she said into the mic. “We know it isn’t always easy to buy a ticket.” The audience joined in singing the final song of the set, “Galileo,” and starting dancing in the aisles. Two women ran up each aisle encouraging the crowd to stand and join them. The audience sang unabashedly, and a small crowd rushed the stage.

After the Indigo Girls left the stage, the energized crowd called for an encore. The ladies obliged first with “Spread the Pain Around” from “One Lost Day” before tossing the audience back in time to 1989 with fan favorite, “Closer to Fine,” backup vocals provided by Hung. About a third of those in attendance stood or approached the stage to snap a few photos, quickly moving along when they saw security walking their way. 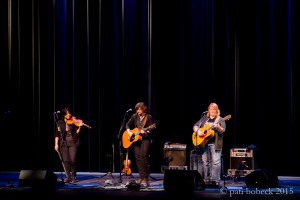 The response between every song was big, but the final applause was huge. At around 10:15 p.m., the audience walked out of the Kirby’s theater excitedly talking about the show. It didn’t seem like anyone was ready for bed nor were they even aware of Monday morning right around the corner.

The set was simple; lighting was simple. Besides the well-written and composed songs and distinct harmony, the greatest take away from the concert was the feeling. The faces getting into their cars still had beaming smiles, and the positivity hung in the air. As the Indigo Girls sang in the opening number, “if we ever leave a legacy, it’s that we loved each other well.” 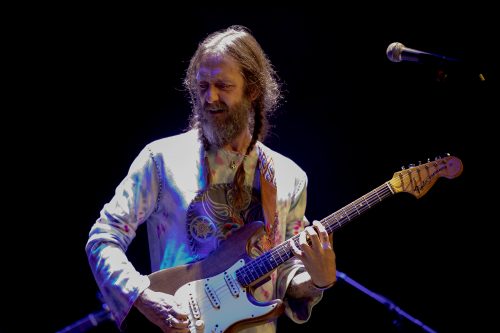