BLOOMSBURG, Pa. — It’s not every Sunday you arrive to church to find a soundtrack of rock and rhythm and blues house music playing while a blues trio tinkers with and tunes instruments near the pulpit.

This past Sunday was no ordinary Sunday at the Wesley United Methodist Church at the corner of Market and Third streets in Bloomsburg, shortly after that congregation’s conclusion of its 10:30 a.m. Sunday service. 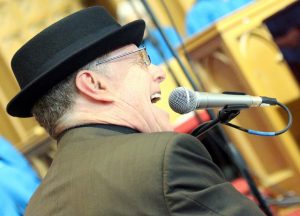 The blues trio, led by New York-based pianist Dave Keyes, and accompanied on vocals by a long-time friend of Bruce Springsteen and a vintage blues singer who worked three decades as an ABC News director, passionately culminated Bloomsburg’s fifth annual, three-day Destination Blues festival with an inspiring one hour, 30-minute set of afternoon gospel blues for a crowd of about 150.

Most who attended would probably agree it was a religious experience — judging by the hand-clapping sing-alongs and “can I get a witness” arm-swaying during hymn-like gospel songs like “Closer Walk With Thee,” “Jesus He Will Fix It” and “My Hallelujah.”

Joining in on backing vocals Sunday were 16 blue-robed members of a locally recruited choir that rehearsed three times with Keyes in the days leading up to Destination Blues, according to festival organizer Oren Helbok.

Helbok serves as executive director of The Exchange, a downtown Bloomsburg-based non-profit art organization that pulls together the annual festival with booking help from Richard Briggs.

Helbok, who also joined in as one of 16 robed choir singers, suggested to Sunday’s animated church audience while introducing Keyes and his band that while the annual gospel blues set in a church falls at the “tail end” of the festival’s music, it is “the tail that wags this festival’s dog.”

Helbok noted that the Sunday afternoon set symbolizes, for him, both the slavery-era gospel roots of blues music and the community-rooted effort that brought this annual live music festival to nearly 20 venues scattered along the Route 11 corridor in Columbia and Montour counties back in 2014.

“I was not a big blues fan before we (started doing) this festival,” Helbok admitted.

Destination Blues this year welcomed a powerful and eclectic trio of national touring acts to the lineup for its showcase Saturday night inside a gem of a downtown venue — the rectangular 650-seat auditorium inside the Caldwell Consistory, a 112-year-old Victorian brick landmark owned by the Free Masons fraternity. 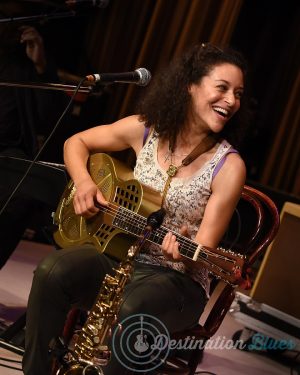 Poconos-based guitarist-vocalist Bobby Kyle, who performed multiple sets Saturday night on the Caldwell Consistory’s side stage with his band, The Administrators, was among those who turned out for Sunday’s gospel-blues set at the church.

Kyle was seen clapping his approval during Sunday’s gospel-blues set, which included JT Bowen, a long-time friend of Bruce Springsteen.

“If you see (JT) in a blues setting, he will give you goosebumps,” said Keyes, whose Sunday trio included bassist Sue Williams and drummer Dave Mohn.

Now 70, Bowen performed as a vocalist in a band led by the late Clarence Clemons, former saxophonist of Bruce Springsteen’s E Street Band.

Toward the end of Sunday’s performance, Bowen introduced a Springsteen cover, “Saving Up,” that Bowen said Springsteen had written for Clemons’ first solo album.

“This is where Clarence Clemons would play sax,” Keyes noted during a vocal break in the song. 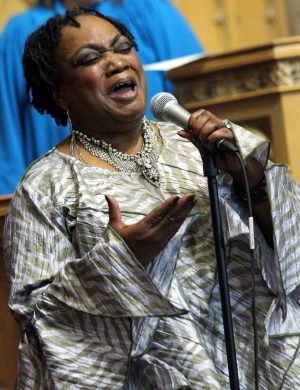 Vocalist Bearether Reddy stunned a hushed crowd with her deep, soulful vocals, particularly during an a cappella version of “Motherless Child.”

Reddy worked for three decades as an ABC News graphics director. She has also performed as a blues bar vocalist and actress on Broadway.

Destination Blues literally rose from ashes during its inaugural year back in 2014 when fire gutted Bloomsburg’s landmark Moose Exchange building on Main Street several days before the festival was to debut inside that building.

Within mere hours after that fire had been doused, festival organizers had already arranged to move the event to the Caldwell Consistory, located about a block away.

Helbok acknowledged the financial challenge of hosting Destination Blues in a small market like Bloomsburg on a limited budget funded in part by a county tax on hotel rooms.

He said Destination Blues has not yet been formally penciled in for a sixth year in 2019, but he’s optimistic for its return.

“We have every intention of keeping the festival going,” Helbok said.

Lead photo: Victor Wainwright at The Consistory, by Oren Helbok