A couple of weeks out from Bristol Rhythm and Roots Reunion and my spirit still dances with residual abandon from the pure magic that is deeply and firmly rooted in this Americana music festival.

Set in the foothills of the Blue Ridge Mountains, known as the Birthplace of Country Music, home of the iconic Ralph Peer Bristol Sessions and Carter Family debut, this festival experience is heaven on earth for any music lover…or really anyone straddling the Tennessee/Virginia state line that particular late September weekend. The artists, the people, the food, the wine slushees…gah! I’m putting this fest on heavy rotation. 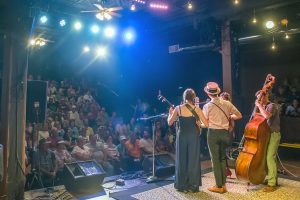 Bill and the Belles

Friday night soared with groups like the Tri-Cities’ own Bill and the Belles. Even my fav old-time/Western swing fiddler, The Tennessee Stifflegs’ Frank Bronson, was in attendance, declaring the God-given gifts of genius fiddler Kalia Yeagle. Kalia, together with Kris Truelsen (guitar, vocal) and Helena Hunt (banjo, ukulele, vocal), had everyone gathered at the NearMoore stage mesmerized with flawless, pure, three-part harmonies. Whether you are an old-time purist or someone that came to BRRR to see something fresh in roots music, both came away from Bill and the Belles with a smile. The newest thing in old time is what I’d call ‘em.

…and the evening continued to fly high when I headed over to Seventh Street for some pop, soul and rock ‘n’ roll with The New Respects. If Lenny Kravitz and Cindy Blackmon mentored a crazy-talented and high-spirited young family band, The New Respects is what you’d get! This Nashville-based band made up of twins Zandy Fitzgerald (guitar) and Lexi Fitzgerald (bass), brother Darius Fitzgerald (drums ) and cousin Jasmine Mullen (lead vocals) had the whole multi-generational crowd rockin’ out from the first note! By the time they started playin’ “Something to Believe In,” we were all collectively groovin’! I hadn’t danced that hard since back when I followed the The Freedom Tour across SoCal all the way up the Central Coast. I dare anyone to resist the retro vibe and atomic fusion of soul, funk, r&b and classic rock sounds of The New Respects. Needless to say, they made a fan outta me, a big fan! I’ve already bought tickets to my hometown show. Trust me, this badass crew is not to be missed. If they’re anywhere close to you, GO! You can thank me later. Suffice to say, I’ve got mad respect for The New Respects.

Saturday morning came. I woke early in my tent to the sun peeking through the screen. I lie there with a feeling, that feeling when you realize that you’re part of something special, a sense of connection to all around you. It steeps deep into your soul, your heart …and then lingers. You can even recall it when you think of a special place or time. I knew this day was going to be, as mountain people say, somethin’ else!

After a shuttle ride down to State Street with Jeff (Bristol local) and Laurie (A first-time BRRR’er like me), I had lists of bands to see and directions to the best coffee and pumpkin cheesecake bars in Downtown Bristol (Blackbird Bakery). 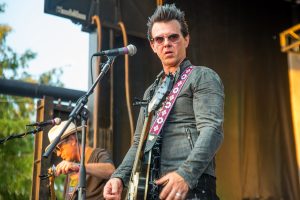 I walked the line toward the State Street Stage, the giant Bristol sign blazing in the distance, a beacon guiding the way, passing a young troubadour busking just down from the Stateline Bar and Grille, acoustic guitar plugged into his Vox Pathfinder. Couldn’t have been more than 13, he was giving it his all in sound and look and he was killin’ it. By the time I reached the lighthouse of Bristol signage, Mike Farris was ruling the State Street stage. I’ve seen Mike before, Hillside at Merlefest, House Concert down by the Tennessee River. I could’ve skipped out. The thing is, he’s so damn good. I’d put Mike Farris up against any rock/soul vocal powerhouse. He’s rockabilly-country-gospel perfection. My friend Ray was with me. She’d never experienced Mike Farris live before and became a follower instantly! Wonder why Mike and Brian Setzer have never come together is some sort of collaboration? Just putting that out there.

Evening was rollin’ in and there was another stage to visit. Just enough time to stop in 620 and order a big ol’ basket of parmesan fries and talk to the good folks sharing our table. We talked about music, family and the spirit surrounding this weekend. We bid them goodbye, finished off every last fry and requested to pay our check, only to discover that we had been treated by these strangers. I was coming to realize that once ya stepped onto Bristol’s State Street in earliest autumn, no one’s a stranger. Again that intangible feeling I spoke of before. If you were there, you would understand, if you weren’t, you want to know it, trust me. Bristol Rhythm and Roots Reunion, as the thousand-watt landmark declares, “A good place to live,” definitely a good place to be.

Yet no festival is complete without… A Caamp Fire Story

Endless strings of rainbow lights crisscross and twinkle over the lawn of the Cumberland Stage. Folks gather row after row waiting on Caamp, those Americana Boys from Columbus, Ohio. Bristol Rhythm and Roots has been, up to this point, one of the most incredible music festival experiences of my life and I sense that all has been leading up to this. 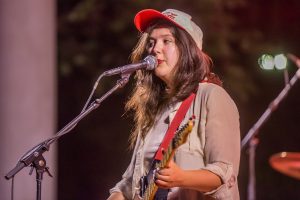 A fresh-faced couple stands next to me. They’ve come extra early to make sure they’re positioned right on the gate. The boy wears his trucker hat and cradles the girl’s waist. Her face so sweet. She looks like she could have stepped out from a photograph on your aunt’s living room table. You know the one, straight, sandy hair parted in the middle, jeans, T-shirt that’s probably his, melding into his arms. Their puzzle pieces fit.

She looks over toward me.

“Are you excited for the show?” I ask. Her eyes light. “Oh, I know every word to every song.”

Her neck cranes up toward the boy. “ Our whole story’s to their songs.”

The boy looks down at her, embarrassed at the remark, yet incredibly proud that he’s holding this creature close. He’s downright stoked to call her his.

I take in a breath. Together, we are all in a timeless space. I can feel it.

Then without much warning, Taylor Meier, Evan Westfall and Matt Vinson walk on stage. Taylor raises his leg as if signaling a snap count in the shotgun. He strums his guitar with intention and a promise that this is going to be more than just a show….much, much more.

They play their songs, all the songs, “Vagabond,” “By and By,” “No Sleep,” “Penny Heads Up” … and in a truly transcendent moment, Evan’s banjo pierces the clear, breezy air with the lick of the heartbreakingly sublime “Misty.” Taylor Meier’s voice echoes over the crowd, filled with truth-telling and gravel. His vocal eerily and beautifully reminiscent of Ted Hawkins, the legendary Venice Beach busker I used to pass many years ago in my time as a Dogtown local.

Taylor looks out at us all under the crosshatch of lights. We’re all together. We’re all in. Hell, we might have all been holding hands at that point. Next to me, I hear a girl singing with abandon, her head leaning back on her love’s chest.

Taylor glances up from his guitar and leans into the mic, “We don’t usually play that one, but I think y’all needed it.”

We did. Well, I definitely did.

Shows like this burrow deep into my soul…the community, the music, the couple wild for each other…and she’s singing every word to every Caamp song. Magic.

JOSH RITTER, ‘AN INTROVERT AT HEART,’ OPENS UP ON STAGE