Bella’s Bartok’s sound is not so easily defined, nor is the band’s history or members who will give you a witty answer that will make you laugh before you realize no one actually answered your question.

With a bouncy sound that makes you want to bend and straighten your knees (perhaps catching some air) imagining yourself under the Big Top, the group’s “About” section on Facebook describes the six-man band as a “Bohemian Folk Punk powerhouse” that “melds klezmer pop with a circus vibe into a spectacle that can’t help but compel you dance!” The band is hoping you dance with them this Sunday at Summer on the Hudson, the “Parks Department’s annual outdoor arts and culture festival,” according to the Park’s website.

The band’s fourth album, “Change Yer Life,” came out right at the tail end of May, so fans might not have seen the dancefloor-breaking sextet perform their newest material. Fret not, for Bella’s Bartok is invading New York City on Sunday with a performance at Summer on the Hudson, which takes place between 59th Street and 153rd Street and boasts “a mix of music concerts, dance performances, movies under the stars, DJ dance parties, kids shows, special events, wellness activities” and other promises of fun for all.

In anticipation of Bella’s Bartok’s performance on Sunday from 7 p.m. to 9 p.m. at Pier I (in Riverside Park South), Highway 81 Revisited was able to interview three members of the group via email. Here’s what they had to say:

Which band member or members are taking part in this interview?

Let’s start at the beginning: how did you get involved in music?

Music has been around us forever. Everyone grows up around music in some way or another. It’s just that at some point we realized we could make a living out of it. Started from the basement parties and alleyways (literally; the band was formed in an alleyway in Western Massachusetts) and then onto real venues, then stadiums (soon), and then other planets (where do you play after stadiums?), and then probably we’ll get washed up and start playing basements again. It’s all very cyclical.

How did you all meet?

Listening to “Change yer Life,” I hear hints of polka, ska and other musical genres. What genre would you put yourselves in or how would you describe your sound?

Ay, there’s the rub. No one’s been able to describe the sound very accurately; there’s inevitably something missing in every description. Vaudeville folk punk? Bohemian circus thrash? Baroque-infused neo-post-modern acousto-electric demon rock? If you’ve heard us and you have any ideas, we’d love to hear them. Three-piece suit garbage dance party?

Can you talk about klezmer and how you were exposed to that?

Klezmer is Eastern European Jewish music involving accordion, horns, etc. It utilizes a lot of harmonic minor scales, those scales that are somehow happy and sad at the same time. It being Jewish music, we learned about it from our Jews: Asher, Jesse, and Amory.

Since klezmer is so traditional and “old world,” did anyone think it unusual that younger generations are bringing this to the general public?

If anyone’s thought it’s unusual, they haven’t told us! But it’s not as if we’re playing straight Klezmer music and suddenly all the kids are going wild for it; it’s more that we’re incorporating a sound that we grew up on, that’s in our heritage. Our music has as much to do with Nirvana as it does with Klezmer. And that’s a natural thing, we think. 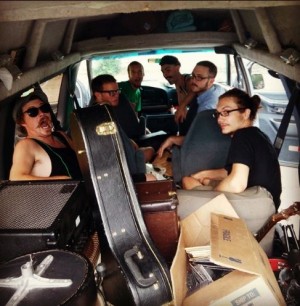 Where did the name of the band come from?

Béla Bartok was a Hungarian composer and ethnomusicologist in the early 20th century. He traveled throughout Europe and Eastern Europe, finding smaller cultures and learning about the myriad folk musics. We would never have heard the music of many, many different cultures if it weren’t for him. And he would incorporate it all into his compositions. So in a quieter, more American sort of way, we’re attempting to do the same sort of thing: incorporate all of the musics of our heritage, be they Irish folk, Klezmer, punk rock, etc., into what we do. Also it’s a really bad pun.

How would you describe your live shows?

Is this your first time at Summer on the Hudson?

It’s not our first time, no.

What was the vibe like the last time you played there?

The vibe is that sort of magical outdoorsy feeling you can only get from seeing the skyline of Manhattan over the audience (or the skyline of Hoboken over the band, if that’s your thing). It also sounds GREAT, for whatever reason. Here’s a funny story from last time: Jesse, accordion player, was running really late, and we waited and waited, and eventually had to just take the stage without him. He finally arrived, got out of his car, heard the music coming from the pier, and thought, “Thank GOD, they’re playing the radio and we haven’t gone on yet.” It was only when he approached the stage that he realized, “DANG, that’s not the radio… that’s my band!” Moral of story is that it must sound pretty good at Summer on the Hudson.

Let’s talk about the new album, “Change Yer Life.” Was there a goal in mind?

There was a goal, and that was to make a record that captured the energy of our live show. It’s impossible to do on a recording, but we came pretty close. The hard part was recording in a bedroom (we recorded it in Fancy Kerrigan’s bedroom and produced it ourselves there). It’s hard to take that manic stage presence and transfer it to a bedroom. Some whiskey helped. 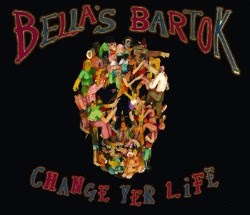 What is your songwriting process? Do you sit and write every day or do you wait for inspiration to strike?

Ooooh, inspiration’s everywhere if ya know where to look, sonny! (That’s to be read in an old man voice.) We’re all constantly writing, but not necessarily music that could be played by Bella’s Bartok. Dan is a MONSTER piano composer, Asher’s a folk superstar, and Fancy is writing a damn opera. But as far as the band’s music goes, we know when we’ve stumbled upon a Bartok song. There’s something special about those songs that just scream “BELLA’S BARTOK!!”

If you could get on stage with one band or musician (dead or alive) and perform, who would it be?

It’s an easy and obvious (to us) answer, but playing with Goran Bregović would be the biggest party that’s ever happened in the world. But if that can’t happen, let’s see… Miles Davis, so he could scowl at us. Nicolas Cage playing guitar would probably be funny to watch. Gandalf plays a mean ukulele I think, so we’d play with him, definitely. “Bella’s Bartok feat. Gandalf the Grey.” It’s got a certain ring to it.

Anything I didn’t ask that I should have or anything you want people to know?

You forgot to ask the most important question of all! “Is Nicolas Cage a good actor or a bad actor?!” Well, it’s complicated. I don’t think we can answer that here. But as far as something we want people to know: be good to each other. It’s important. A lot more important than being right. You feel me? Ok? Ok! We’ll see you on Sunday, baby!!