Seven features and 19 years into his directorial career, one would think that it would be possible to understand David O. Russell’s outlook on the world at large, but one of the central tenets of his movies has been his ability to be at once deeply personal and philosophically indecipherable.   Russell’s signature movie, 2004’s “I Heart Huckabees,” centers on characters desperate to reconcile the simultaneously horrible and wonderful aspects of the world around them, along with the dark and light aspects of their own being (oh, and it was a goofy comedy).

Aside from the acidic, straight-no-chaser cynicism of his breakthrough film “Flirting With Disaster,” Russell has balanced his stories with scenes that are tough, no-frills examinations of human shortcomings and pain with scenes of exuberant exhilarating joy, that seem a half-step removed from a full-scale Hollywood musical.  He might be the only director alive that could probably pull off a remake of either “Who’s Afraid of Virginia Woolf?” or “Singin’ in the Rain,” depending on his mood.

It may sound like I’m damning Russell with faint praise, but in truth, his seeming indecision on human nature has led him to create a series of fascinating, multilayered character studies.  As Irving Rosenfeld, the central protagonist of “American Hustle” initially seems to be yet another movie con artist whose slick, cocky exterior masks a cold, dark heart (think “Cool Hand Luke” or “Catch Me if You Can”).

But then a funny thing happens: Rosenfeld turns out to be, in his own twisted way, a genuine romantic, a music and art aficionado (which makes peddling phony paintings all too easy) who falls hard for Sydney (Amy Adams), a fierce, intelligent woman that wins her way into his hustles and his heart.   That is, when he isn’t going home to his shrill, manipulative wife (Jennifer Lawrence) and stepson.  Lawrence is a marvel here, manipulating Irving by wearing him down with seemingly insipid arguments and suckering him in with her looks and the promise of a “real” family.  And so their lives go, until the law catches up with them.

(Personal aside:  I may be the only person in the world who feels this way, but I thought that Cooper deserved the Oscar for “Playbook” more than Daniel Day-Lewis did for “Lincoln.”  Did Lewis give a better performance?  Certainly, but he’s Daniel Day-Lewis, of course he was going to blow the doors off every theater in America when playing Lincoln.  That’s what he does. Cooper, meanwhile, showed a depth of range and emotion never even previously hinted at in a career of playing smug douche bags.  It was like the school valedictorian writing an A++ term paper, and the class screw-up writing an A- paper.  Which one is really the bigger accomplishment?)

Sporting a deliciously hilarious set of tight curls (and really, I could go on for another thousand words about the awesome hair and clothes in this movie) and the kind of attitude that screams “I have never had anyone seriously say ‘no’ to me in my whole entire life,” Cooper slams his way into Bale and Adams’ lives and forces them to help him take down local and, eventually, national politicians (the movie is very loosely based on a real 1970s political scandal).  Then Cooper falls for Adams, and complications inevitably follow.

Now, this movie is not flawless.  Russell, a comedy-oriented director, could have stood to raise the stakes and tension a bit more.  The film opens with a sting operation trying to nail an idealistic but corrupt Atlantic City mayor (Jeremy Renner, whose wall of hair might be the most impressive in the movie, an achievement of some note), and when the scene is revisited a bit later … not a lot happens.  This is a movie that is very funny at times (a running bit about ice fishing between Cooper and his boss, played by Louis C.K., is one of the funniest of the year), but aside from a terrific scene late in the film involving a cameo that I won’t spoil here, there’s never a sense of real danger.  Also, the movie shares with “The Wolf of Wall Street” a needless fixation on voiceovers.  None of these actors, in particular the radiant Adams, needs a narration explaining their inner thoughts.

None of these quibbles make this movie any less worth seeing.  The centerpiece of the film is an exhilarating, fun trip into former New York Mecca Studio 54, which leads to a moment of genuine connection between two characters … that might also be a lie … that happens in a filthy bathroom stall, while annoyed and amused patrons heckle them from outside the door.  Russell’s duality leads to his characters walking through hell to get to a happy ending, but that just makes it worth the trip. 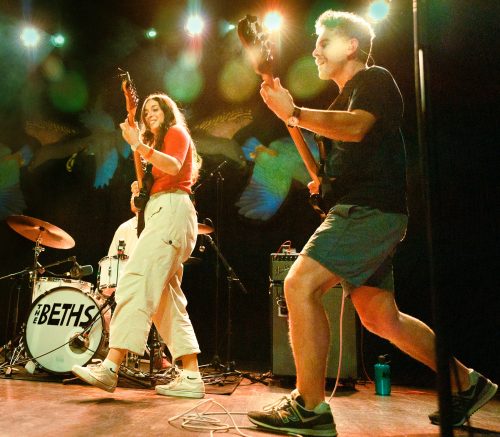