The legendary shock rocker gave us a call to talk about is Oct. 18 show at the F.M. Kirby Center in Wilkes-Barre, which is part of his “Raise The Dead” tour.  Here is part one of our conversation.

H81R:  I saw you perform three times in the past six years, and each time was different.  How do you plan the setlist and the look for each tour?

AC:  It’s so funny because it’s almost the hardest thing when you’re trying to please all the fans is trying to do something that everyone wants.  Of course we’re going to do all the hits, but then I get e-mails going “how come you didn’t do this?” and “how come you didn’t do that?”  Everybody has their own favorite songs for their deeper cuts.  So we’re going to do 28 songs.  That’s one of the hardest parts of doing a show:  What songs are we gonna put in?

Once you get them in there, the easy part for me is staging it.  This show that you’re going to see this time is totally different from the show that you saw last time.  That’s kind of the fun part for me, putting the new show together, and let’s see what we’re going to do this time to surprise the audience.

I think one of the most important parts of this show is that the band is so good.  The band is the best band I’ve ever had.  The reviews every time are “this band is unbelievable.”  Orianthi on guitar, Ryan Roxie on guitar, Tommy Henriksen on guitar, Glen Sobel on drums, Chuck Garric on bass and me.  And then of course, extras.  But this band gets great reviews every single night.  It’s easy for me when I get a band that just takes my songs and really rips ’em.

H81R:  What do you want people to say when they walk out of the venue?

AC:  I think they come in with the pre-thinking of, “Well, this a legendary, mythical character,” and “He must be 65, so this must be Alice walking through this and kinda doing his hits and talking to us.”  They get just the opposite.  We do all the hits, but it’s the highest-energy show they’re gonna see all year.  And Alice is more of a villain now than he’s ever been.  He’s more pronounced than he’s ever been.

Then they’re wondering, “How did I get confetti in my hair?  Why do I have stage blood on me?  Look, I caught a necklace, I caught a cane, I caught a riding crop.”  Everyone goes home with souvenirs that get thrown from the stage to the audience.  So it’s a huge party.  When they walk away, they go “That was the most fun show I’ve seen all year.”

H81R:  Have you ever thought about performing as the real you, and not as the Alice Cooper character?

AC:  I would never do that.  I would absolutely never do that.  I created Alice to be my favorite rock star.  So when I play him, I am playing my favorite rock star.  If ever I actually go to see somebody and I go, “Wow, I like that guy better than Alice,” then I’m in trouble, because that means I have to create something new for Alice.  I do things on stage that I want to see Alice do if I were in the audience.  So there you go.

I get very excited every night when I get in front of an audience.  And you would think after doing “18” and “School’s Out” for the 7,000th time . . . it’s still exciting.  When you start the song and the audience goes crazy, you can’t get bored with that.

H81R:  What entertains you?

AC:  I hate reality TV.  I really hate reality TV.  Except for I love “Ghost Hunters.”  I watch “Ghost Hunters” every Wednesday night.  And I know these guys.  And I asked them, “Guys, you’re going into these houses and you don’t know what’s in there?” and they tell me that 80 percent of the stuff that they go into, they debunk.  It’s just a house settling or something.  But the 20 percent is really scary because they can’t explain it.  So I’m addicted to that.  But I can’t stand “Survivor” and all the shows where you’re getting voted off the island.  I kinda wish a tidal wave would just wash everyone off the island.  That I would watch.

Newer PostSWIM DEEP: “WHERE THE HEAVEN ARE WE”
Older Post COVERS AND COLLABORATIONS 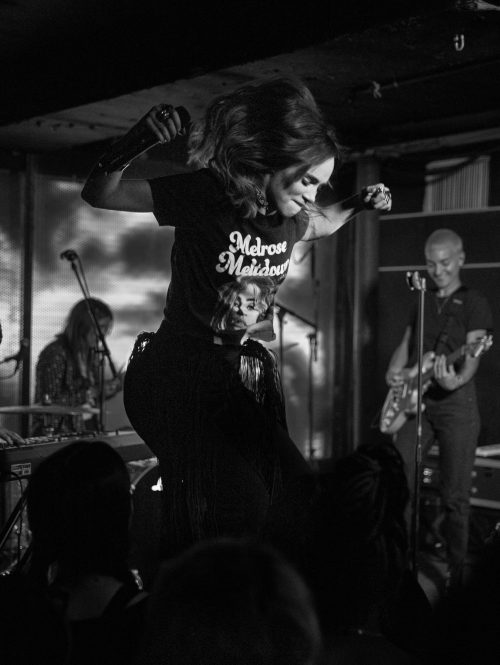