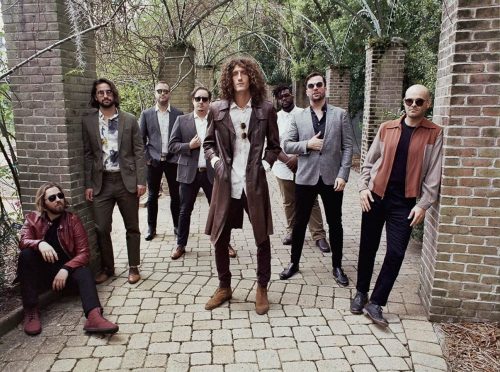 THE REVIVALISTS’ DAVID SHAW: ‘IF THIS IS A DREAM, I DON’T WANT TO WAKE UP’

The Revivalists — an eight-piece, soulful rock band from New Orleans — have sold millions of records and thrilled crowds from coast to coast. And now, after a forced hiatus from the road due to the pandemic, the band and fans are about to get back together.

“We hadn’t been out on a real tour in about two years,” says frontman David Shaw. “A lot of these shows on this specific fun, people have been waiting for two years, been holding their tickets for two years.”

The tour kicks off at Radio City Music Hall on Friday, April 1, and hits Parx Casino in Bensalem, Pa., for a sold-out show on Saturday. The band has also already sold out dates in Chicago and Minneapolis, and they’ll return to Red Rocks in Colorado in June for a sold-out engagement. There’s also a May date at Jazz Fest — a special hometown show in New Orleans — and the group will play at Peach Festival in Scranton later this summer.

We chatted with Shaw this week about the band’s anticipated return to the stage, how he keeps himself in shape for the group’s high-energy shows and what fans will hear when The Revivalists release a new album, the follow-up to 2018’s “Take Good Care,” which included the No. 1 Adult Alternative hit “All My Friends.”

It’s been quite some time since The Revivalists were out on the road. How are you feeling going into this tour?

I’m really, really excited, honestly, to be getting out there. … It’s a really exciting time in The Revivalists camp. We’ve been working on a lot of things and getting everything super tight.

You’re kicking the tour off at Radio City. Have you played there before?

No, this will be our first time.

How does that feel?

Oh man, it’s a legendary venue. I’m just grateful that we’re able to get up on that stage and do this thing that we started in somebody’s living room, it started from a porch, a chance meeting on a porch. So it’s really special to be able to say, oh my God, we’re playing Radio City. I think we’re all just trying to take it in and not pinch ourselves too hard — if this is a dream, I don’t want to wake up.

With these sorts of milestones — Radio City, selling out Red Rocks, opening for The Rolling Stones — how do you process them? Are you able to take time to appreciate them?

Sometimes it’s tough. It really depends if I’m doing the right things in my life and my anxiety flow is low. If my anxiety is down, I’m able to be truly in the moment and be present with it all. If there is a little more anxiety, it can kind of steal those moments from you. I have to watch myself.

Whether it’s Jazz Fest or Red Rocks or some small club, what is your intent when you take the stage each night?

$1 from each ticket sold for these shows is going to various causes through Rev Causes, your band’s philanthropic umbrella. Tell us a bit about Rev Causes and why you started it.

The Revivalists are working a new album. How far along are you?

We are not even into overdubs. We got a good amount of the songs recorded. We’re pretty far down the rabbit hole, but we haven’t made it out the other side. We’re in the throws of it right now. Now, it’s just trying to find the time in between touring to do all the things that one would need to do to make a record.

What kind of teaser can you offer the fans about the new material?

Without divulging too much, I think it’s a little more raw, a little more Revivalists, and that was mostly the ethos of the album. That’s all I can say.

Do you write on the road?

I can’t write on the road. It just doesn’t happen. I’m too wrapped up in making sure that I’m getting enough sleep, eating correctly. Time on the road for me is basically let’s make sure that you’re doing all the things for your body in order for you to be able to perform.

Did you always take these things into consideration?

I never really did. I didn’t need to talk about that stuff for the longest time, then it was like I got hit by a Mack truck. I had to really, really put my focus on self care and thing about all of these things: what am I putting in my body, what are my blood sugar levels, because I’m a skinny guy. If I’m not eating some nuts in between meals, I’m mall over the place. As I’ve gotten older, I’ve adjusted.