The latter half of 2016 is shaping up to be a nostalgic period for The Hold Steady. The New York-based band had already announced that its only headline shows this year would include former keyboard player Franz Nicolay (absent from the group for more than five years) and feature full performances of “Boys and Girls in America,” THS’s third album, which turned 10 last month.

On Tuesday, the band announced deluxe edition releases of its first two albums: 2004’s “Almost Killed Me” and 2005’s “Separation Sunday.” Both will be out Nov. 11, and pre-orders started Sept. 13. (Complete track lists below.)

According to a press release about the deluxe editions, which will be out on Frenchkiss Records:

ALMOST KILLED ME and SEPARATION SUNDAY have been remastered from the original tapes, with each now appended by an array of bonus material (see tracklistings below). ALMOST KILLED ME: DELUXE EDITIONcomes joined with five rare tracks, including the very first Hold Steady 7″ single, “Milkcrate Mosh,” and songs previously only available on the album’s original Australian CD release. SEPARATION SUNDAY: DELUXE EDITION features six additional tracks, including the never before available “212-Margarita” and “The Most Important Thing” along with previously unreleased demos of “Cattle and the Creeping Things,” “Charlemagne in Sweatpants,” and “Crucifixion Cruise.” All extras will be available on the Deluxe Edition CD releases and via vinyl download cards.
As if all that were not enough, ALMOST KILLED ME will be offered on bright blue vinyl, with SEPARATION SUNDAY pressed on pristine white vinyl. The Deluxe Edition LPs mark the first time both albums have beenavailable on vinyl in more than a decade. Digital pre-orders of ALMOST KILLED ME will receive “Milkcrate Mosh” immediately and digital pre-orders of SEPARATION SUNDAY will receive “212-Margarita” instantly. 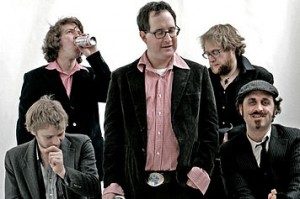