In Josh McCaslin’s world, mariachi bands think nothing of hanging out with surf rockers. Yelping rockabillies and Nick Cave are not strange bedfellows, and fresh-faced TV cowboys shoot knowing glances at red-eyed punks. It’s the world McCaslin and his band, Oregon’s Roselit Bone, have staked out for themselves on “Blister Steel,” the 9-piece group’s eerie and cinematic sophomore album, released June 2.

McCaslin, originally from Southern California, formed Roselit Bone in 2013 as a duo with drummer Ben Dahmes, but the ranks of the band began to swell, with the addition of flute, trumpets, pedal steel, accordion and violin. A debut record, “Blacken & Curl,” came in 2014.

What was the dynamic like in the studio for “Blister Steel” with you also serving as producer?

Well, most of theses songs, they start with me just writing them on acoustic guitar. Almost everything is written and played for a while before it hits the band. So I generally will sit on that for a while. I slowly start writing the arrangements, like the trumpet and strings and organ, and that’s a process that takes a couple months. A lot of the album is totally orchestrated; there’s not a lot of improvisation going on, but with this album in particular I left space for total improv where people could solo and add whatever atmosphere. On pedal steel, Barry [A. Walker Jr.] is the kind of guy that never wants to play the same thing twice. I think that added an element of spontaneity  that wasn’t there with the first album and expanded the palette.

The album opener, which is also the title track, is an attention-grabber. Why did you choose that song to open?

I wanted to have something that didn’t give away the full bombast of the rest of the album, something that kind of hinted at what was to come but didn’t have the full orchestration and stuff. I see the album as having two sides. The vinyl is definitely split into two sides. [The first side] starts with “Blister Steel” and ends with “Leech Child” with the noise freakout at the end, and the second side opens with “Where Our Cast Light Doubles,” a mellifluous country ballad that immediately lightens the mood and obviously provides a salve for what happens.

Part of the reason I chose “Blister Steel” as the opening track…I think we decided on the sequencing back in December, and with everything going on in the country, it seemed like a pretty dark time, and the mindset I was in was pretty in line with the subject matter that it deals with.

Is there any kind of theme or common thread on the album?

I think the album deals with a lot of psychological issues and sort of an almost dreamlike, nightmarish feeling, even on the second side where the music is generally lighter, there is an element of like a loss of control there. “Tie Dye Cowboy” is a pretty cheesy song from first listen, but in the back of my mind while we were doing that I think I was going for something a bit more psychotic. The voice-over at the end of the song was kind of a hint that helped sell it.

Your songs definitely sound set in the West. How much of an influence do your surroundings have on your writing?

I do think that living in Oregon and out in the woods and stuff really adds a sense of isolation and sort of claustrophobia that you don’t get in other areas. I actually grew up in the Los Angeles/Ocean County area, so when I moved to Oregon, what immediately struck me is you are just closed in by forest, and it’s raining all the time and pretty naturally depressing (laughs). I think that affects my writing, but also it helps me gain perspective on other place settings, and living here made me appreciate the desert a little bit more. The desert is never too far away from where we are, because eastern Oregon is pretty desolate and dry.

Tell me about the formation of the and and how it has changed and expanded since then.

So we started out as a two-piece, just me and Ben Dahmes on drums. I think we did that for six or seven months. All my songs are able to stand up with just one guitar and vocal, I carried most of the arrangements and melodies on guitar. Then I started to hear an expansion to that and added a trumpet player and eventually added bass. I just kept adding members one by one over the course of the years, and right at the end of the recording “Blacken & Curl” I played a show with Barry and Val [Osterberg] and one of their other bands and was blown away by Val’s voice and Barry playing pedal steel and knew they had to be part of this project. Barry ended up playing on two songs on the “Blacken & Curl” sessions.

Barry is from a Grateful Dead background and a constant improviser. I’m a very meticulous songwriter and arranger, and having someone in the band that fights me on that is good. 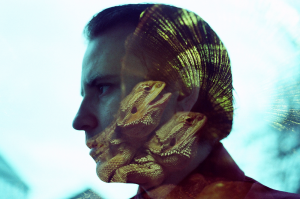 What are some common influences the nine of you share?

We obviously are all super into classic country. Me and Victor [Franco] particularly bonded over Mexican ranchero music. I don’t think a lot of people openly listen to that stuff, at least in Oregon. When he found someone that was directly adding influence from that, I  think he was excited because that’s the music that he grew up with.

I feel like I have connections with each member of the band over different things. Like me and Victor and Matt [Miller] and a lot of the members, we all grew up with a punk background, and some of us are from the LA area and listened to bands like X and The Gun Club, and on the other side there’s Barry, who was never into punk. He’s kind of an authentic Southern country musician.

How would you describe Roselit Bone’s live show?

I think it changes depending on the setting. If we’re in like a strange place and the crowd isn’t immediately receptive and not paying much attention, it becomes…I kind of go into a more aggressive, confrontational live show to make people pay attention. I don’t think it’s hard with a 9-piece band to keep people listening. There’s definitely a divide between us playing with friends of ours and to a crowd we don’t know personally and an alien crowd.

I think some people would describe our show as we’re pretty intense live and seem like we’re pissed off all the time (laughs). I’m pretty heavily influenced by Alan Vega and Suicide, Nick Cave and bands like Fear and The Gun Club, who are pretty aggressive. I think the more nuanced stuff kind of takes a backseat live, particularly when you’re playing venues that don’t have the best sound. We kind of default to the darker material and more abrasive stuff. 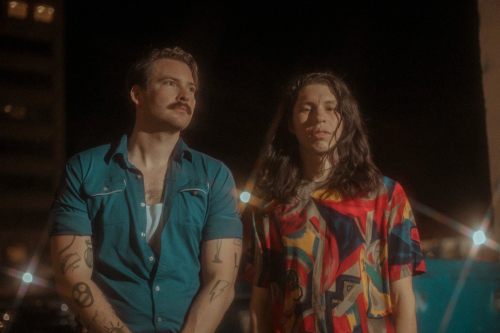