Mandolin player John Skehan of Railroad Earth credits 1950s comedy duo Abbott and Costello — of all people — for his route to Susquehanna University in Selinsgrove, Pa., in the early 1990s.

The Stillwater, N.J., native enrolled in the small private college in Snyder County to study piano.

Years later, while playing guitar in singer-songwriter duos at clubs and bars, a friend handed him a mandolin, suggesting he give it a whirl.

The piano, which he still occasionally tinkers with for “recreational purposes,” quickly took a backseat to the melodic mini-guitar.

Railroad Earth, which prefers not to be labeled a bluegrass band, or a band from any other genre for that matter — returns for the second straight year to the four-day Peach Festival at Toyota Pavilion at Montage Mountain, which drew more than 30,000 last year.  The boys from Northwestern New Jersey, plus renowned violinist Tim Carbone, who lives in nearby Stroudsburg, are slotted to play day two of the festival — Friday, Aug. 16.

“It was a great festival (last year),” Skehan said of Peach.  “We’ve had the chance to collaborate with Warren Haynes.  It’ll be great to reconnect with that scene.”

“We generally don’t know until we get there.  Sometimes, you can try to plan it, and things work out.  Sometimes, things just happen,” said Skehan, 43.

Skehan spoke to Highway 81 Revisited by phone from his home in Stillwater, N.J., during a recent break from the band’s busy summer touring schedule that has included its first headlining performance (July 12) at Red Rocks in Colorado and five “Noise of the Earth” dates on the West Coast with keyboard great Bruce Hornsby and his Noisemakers, with whom they return to the road this month.

The band is also putting finishing touches on its latest studio album.

“We’ve been really lucky to have (Hornsby) come out and play piano with us on a couple of songs (including ‘Elko’ and ‘Black Bear’),” Skehan said.  “He fell right into it.”

Despite the band’s growing popularity and its increasing national exposure at much larger venues, Skeehan anticipates the band will once again spend the Thanksgiving holiday close to home, hosting its annual multi-night run at the intimate, 1,400-seat Sherman Theater in Stroudsburg, although dates have not yet been confirmed.

The party there in recent years has included opening acts such as Scranton-based bluegrass sextet Cabinet, which seems to be following a similar path to popularity as Railroad Earth.  Cabinet was long ago booked for Peach Fest’s Saturday lineup.

“They’re just a terrific band,” Skeehan said.  “It’s great to see them start to gain some momentum.  Some of the early shows, they brought busloads. They had great crowds.”

Then, there’s the opposite end of Skehan’s collaborative spectrum.  Skehan described a “surreal” his experience playing on stage with some of his “heroes” — mandolin players Sam Bush and Ronnie McCoury (“They’re super-cool, supreme gentleman.”) in addition to Phil Lesh of the Grateful Dead and Bill Nershi of String Cheese Incident.  “Nershi is always eager to play with us on stage,” Skehan said.

“My interest in classic rock led me to want to study more and the formal study led me to piano,” Skehan recalled.

When he reached high school and college recruiting pamphlets started arriving in his mailbox, one from Susquehanna University struck a chord with him.

“Abbott and Costello had that routine with the traveling salesman trying to find the Susquehanna Hat Company.  Some tragic thing always happened,” Skehan recalled with a chuckle.  “When you’re getting a bunch of junk mail in high school — that one just jumped out at me.  I laughed about it and started checking it out.  It just started from there.”

He enrolled at Susquehanna, studying classical and jazz piano and graduating in 1992.

When his friend handed him a mandolin a few years later at a gig, his musical tastes quickly gravitated toward bluegrass, particularly 1970s Old and in the Way, which counted David Grisman on mandolin and Jerry Garcia on banjo among its members.

“Not a lot of people know Jerry was a rippin’ banjo player,” said Skehan, who plays a prominent role in composing RRE’s melodic Celtic instrumentals.  “Bluegrass is not unlike jazz in that there’s a common body of music everybody knows.  You can sit down with a group of strangers, and say, ‘Hey, Let’s play ‘Salt Creek’ in one form or another.”

While Railroad Earth’s rise in popularity on the festival circuit may seem rapid among its faithful, who call themselves Hobos, Skehan has been there through it all since the band formed in 2001.

“We’ve had a whole lot of luck and good opportunities,” he said.  “It still feels like it’s taken a good long time to get where we are.  Now, more than ever, it feels like things are starting to catch up.” 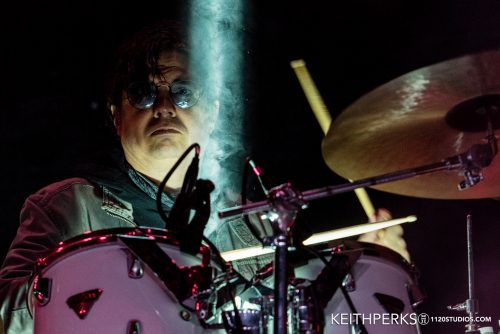