Hours later, the diminutive teen with the distinctive Jimi Hendrix-like afro and big-sounding guitar had graduated to the main stage with the big boys, standing alongside the imposing Jimmy Herring while jamming with weekend headliners Widespread Panic during the Athens, Ga.-based band’s only Northeast appearance of a light-touring 2017.

Niederauer, a New Yorker who starred as Zack Mooneyham in Broadway’s “School of Rock the Musical,” emerged toward the end of Panic’s Peach debut set Saturday night to trade notes with a wide-grinning Herring during “Surprise Valley.”

Performing in such company is nothing new to Niederauer.

During his “career,” he has already appeared on stages with the likes of Buddy Guy, Stevie Nicks, Lady Gaga, George Clinton, the late Gregg Allman, Warren Haynes, Gary Clark Jr. and the late Col. Bruce Hampton.

And as Niederauer shredded his guitar with the intensity of someone twice his age, a realization surfaced: Elder statesmen of the southern band founded on the campus of the University of Georgia back in 1986 are nearly four times his age — theoretically old enough to be grandfathers to Niederauer.

Herring and rhythm guitarist/vocalist John Bell — both 55 years old — nonetheless quickly ceded the stage to Niederauer for a guitar solo a few minutes into “Surprise Valley.”

Panic, which would return to close out the four-day festival Sunday night, invited another next-generation blues guitarist — 21-year-old Marcus King — on stage after Niederauer for a pair of songs following “Surprise Valley” — covers of 1930s bluesman Robert Johnson’s “Me and the Devil Blues” and the Talking Heads’ “Life During Wartime.”

King’s band had performed earlier Saturday on the Mushroom stage, one of three hosting acts on the mountain throughout the weekend. 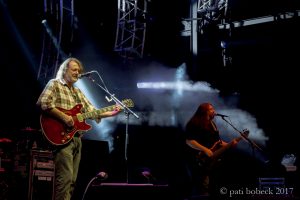 Neither of Panic’s setlists from Saturday or Sunday night were extraordinary in terms of song choice. They neither busted out any debuts, nor — surprisingly — any Allman Brothers covers during the Allmans-themed festival.

But there was no shortage of Allman Brothers music throughout the weekend.

Bell and Herring set a high bar for their band Saturday night before Panic’s road crew even rolled gear on stage. The pair walked on stage together at the close of Warren Haynes and Govt Mule’s set featuring guitarist John Scofield for a powerful encore cover of Neil Young’s “Cortez the Killer.” Haynes and Bell vocally traded verses during “Cortez,” hands-down the Peach stage’s collaborative highlight from Saturday.

Saturday afternoon’s tribute to Allman, Trucks, Hampton and Jimmy Nalls — a guitarist who helped form an Allman Brothers spin-off, Sea Level, after the Alllmans’ split in the late 1970s — was a massive family affair of Allmans alumni and rotating musicians directed by keyboardist Chuck Leavell, perhaps best known for his work with the Rolling Stones. Leavell first broke into the industry as a 20-year-old with the Allman Brothers in the 1970s and later co-founded Sea Level with Nalls. 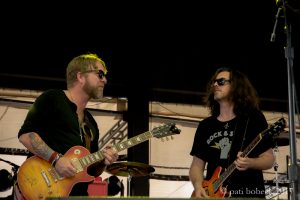 Many of those same Allman all-stars returned to the stage Sunday afternoon for a performance by Les Brers, a band Butch Trucks formed with ABB alums Jaimoe, Marc Quinones and Burbridge.