SCRANTON — A mere five years ago, the idea of a commercial radio station playing current, relevant music in the Scranton/Wilkes-Barre market would be met with a cynical “yeah, right.”  Suggesting that said station would present a concert at the region’s largest venue featuring some of these acts, which can best be described with the overused and catch-all term “alternative,” might get you committed to a home for the insane.

But the station, Fuzz 92.1, has been  on the airways since 2010, and on Sunday it presented its second annual Fuzz Fest, highlighted by a remarkably energetic and crowd-pleasing headlining set by Cage The Elephant.

Following slots by locals Graces Downfall as well as Northern Faces, Brick and Mortar, The Unlikely Candidates, Skaters and KONGOS, Cage hit the stage a little after 9 p.m., powering through a fine cross-section of its catalog, inspired chiefly by 1990s Britpop and 1960s psychedelic rock.  Frontman Matthew Shultz instantly connected with the crowd during opener “Spiderhead,” his hair flopping as he headbanged and emoted, working various parts of the stage.  The very Oasis-y “In One Ear” followed, and “Take It Or Leave It” displayed the Kentucky band’s knack for dynamics; the verses were dark and the choruses big and flowery.  The band’s breakthrough single “Ain’t No Rest For The Wicked” predictably drew heavy cheers, but Cage’s entire set went over well, with many in the crowd likely fans of the group’s album cuts, not just its hit songs.

Touring keyboardist Matthan Minister shared lead vocals with Schultz on “Black Widow,” as he did on several tunes.  Another major alternative and rock radio standout, “Come A Little Closer,” closed the set proper, and played live, it lost none of its haunting yet melodic luster.

Schultz emerged shirtless of the encore, which included “Shake Me Down,” and like “Come A Little Closer,” it veers quite sharply from Cage’s aforementioned Britpop/psych blueprint.  He dove into the crowd for part of the encore, standing propped up by fans at one point.

While Cage showed why its music has found a large audience — and why it was clearly a large-font, major venue headliner — the other acts were at worst entertaining and at best compelling.  This reviewer’s favorite from the undercard was Unlikely Candidates, who combined gritty blues rock with shimmering Killers-like guitar patterns.  The least impressive was Brick and Mortar, which played to electronic music rather than play electronic music; that is, the guitar-and-drums duo seemed to be only support players for their pre-recorded synth tracks and effects.  That said, they were very enthusiastic and the crowd did not seem to mind.

SON LITTLE, AT BOWERY BALLROOM, HINTS AT SOMETHING BIGGER 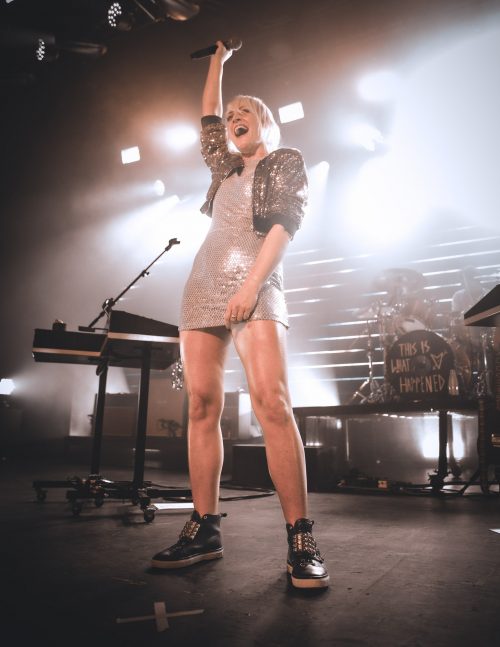