BETHLEHEM, Pa. – The best way to describe a Modest Mouse show, when it is at its best, is organized chaos. Band members switching instruments so frequently that keeping track is futile; cacophonous sounds that make you wonder how the band ever got mainstream radio play; frontman Isaac Brock aborting songs, singing like a madman and playing with such intensity that he loses his hat, more than once.

It all makes for an intriguing, and at times, transcendent concert experience, which was certainly the case Wednesday night before a sold-out crowd among the stunning confines of the Levitt Pavilion at SteelStacks in Bethlehem.

Opening with “Dramamine” from 1996’s “This Is a Long Drive for Someone with Nothing to Think About” with lyrics from 2000’s “The Moon & Antarctica,” Modest Mouse quickly asserted some of its dominant aspects, most of them regarding guitars: shimmering layers of them during a build-up, and interlocking, ambient structures during the quieter conclusion. “I Came As A Rat” featured two violinists, while queasy bass introduced “Interstate 8,” which did not get any further; “Shit on that, I don’t feel like playing it,” Brock said. Instead, he led the band into “Trailer Trash,” which showed a somewhat sweeter and melodic side, and featured a nice linear Brock guitar solo.

The frenetic “Dance Hall” ended any hints of mellowness, while the jittery blues of “Be Brave” set up the familiar big guitar line of “Ocean Breathes Salty,” one of the band’s best-known songs, and one of Wednesday’s highlights. Brock switched to banjo for “King Rat,” which was built on a steady beat and had a Dixieland jazz feel thanks to the banjo and horn accompaniment.

Brock’s chiming electric 12-string guitar helped flesh out the breezy “Fire It Up,” while “Shit In Your Cut” sprung from bass drum quarter notes and open-and-closed hi-hat patterns. The song, like most of the latter half of the show, featured Modest Mouse multi-instrumentalist Russell Higbee, formerly of Delaware Water Gap-based Lewis and Clarke and Philadelphia’s Man Man, on bass. “Doin’ The Cockroach” featured a nice drums/percussion/guitar meld, while the trippy “Third Planet” had a big chorus and evoked fellow Pacific Northwestern guitar rockers Built To Spill.

Many of Modest Mouse’s most popular songs are also their best, like “Dashboard,” which came near the end of the set. From the band’s latest major release, 2007’s “We Were Dead Before The Ship Even Sank,” it was propellant, a slice of taut, anthemic, modern rock; like a few of Modest Mouse’s songs, it has the big feel of Arcade Fire, with more visceral energy and less artifice.

The set wrapped up with the frenetic, “Talking Heads”-esque “The View,” before an encore of “The Devil’s Workday,” “Sugar Boats” and “Fly Trapped In A Jar.” Even more musicians emerged, including Brock’s guitar tech, who played trumpet, and a mellophone player. The klezmer-inspired “Devil’s Workday” came to a thrashing end, before Brock’s somewhat Pink Floyd-like guitar riff began the final song. House music played but the lights stayed down, leading some to believe there might be another encore – “Float On?” – but it didn’t happen.

Morning Teleportation, not listed on tickets but on the Modest Mouse tour, nonetheless made a name for themselves with a strong opening set, bringing to mind a more progressive and energetic Tame Impala. Vocalist Tiger Merritt sounds quite a bit like James Mercer of The Shins, and Travis Goodwin’s keyboards borrowed more from Yes or Emerson Lake & Palmer than any current psych rock during the Bowling Green, Ky., band’s performance. They are signed to Brock’s Glacial Pace Recordings label. 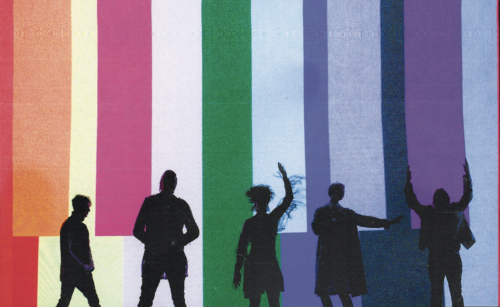