When Little Feat got together 50 years ago, the goals set by keyboardist Bill Payne and singer-guitarist Lowell George were twofold, Payne says.

“One was keeping it elastic so if we needed to include more players we would do so to keep the music eclectic, and the idea that Little Feat would probably not be a household name but we would make more than a dent within the musical and creative communities, and we’ve certainly done that.”

As a touring and recording phenomenon, the California-based band offered a fresh take on rock, with elements of country, jazz and R&B, peppered with smart, quirky lyrics. They hit their stride with their third studio album, 1973’s “Dixie Chicken,” and 1978’s “Waiting For Columbus” is considered one of the best live records in rock history.

But by the end of the ’70s, George had gone solo and broke up the band. He battled health issues and drug and alcohol problems and died during a solo tour in 1979.

“I did an interview with People magazine — that shows you how long ago that was — at any rate, I told People magazine that without Lowell George there was no Little Feat,” says Payne. “When we started up in, gosh, I guess it was ’88 or ’87, I was reminded by that by quite a few journalists. ‘You said this.’ Yeah, I did, but I had grown past that. We’ve restarted and this is how I feel now, is that OK with you?” 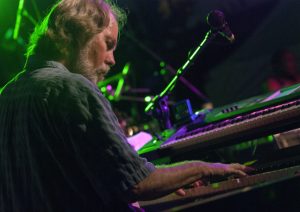 The current iteration of Little Feat features Payne and longtime members Paul Barrere (guitar, vocals), Fred Tackett (multi-instrumentalist), Kenny Gradney (bass) and Sam Clayton (percussion, vocals) as well as Gabe Ford (drums). Barrere, who has dealt with liver disease, is sitting out this leg of the 50th-anniversary tour, with Scott Sharrard filling in for the Oct. 26 show at the FM Kirby Center in Wilkes Barre. He’s not the only longtime Little Feat member who will be on the minds of the other musicians.

“We embrace Lowell within this group,” Payne says. “He will always be a part of Little Feat. For some people, he was the main attraction, until they dig deeper and they see that some songs were written by other people that maybe they thought were written by him. It doesn’t denigrate Lowell at all. He had some wonderful songs, his phrasing was incredible, not only as a guitar player but as a singer in particular. So we honor Lowell every time we hit the stage.”

“Waiting For Columbus” continues to turn up on best-of lists and even got the Phish Halloween treatment in 2010 when the jam band covered the release in its entirety in Atlantic City.

“There were a bunch of shows that we put together for that record, and there were also some overdubs for that record, drums were not overdubbed, keyboards were not overdubbed, but some vocals and guitars,” says Payne, speaking to us while on tour with the Doobie Brothers, for whom he’s been the road keyboardist since 2015. “When I heard that in the studio for the first time, and it was that chant of ‘Join the Band’ into ‘Fat Man in the Bathtub,’ the hairs on my arms went straight up. It was electric in every sense of the word. Did  I know it was going to be this iconic record? No, not really. But for me and how it sounded, it made an impact. I thought it was great.”

Little Feat’s most recent studio album is 2012’s well-received “Rooster Rag,” which marked the first the band recorded with Ford on drums since the death of Ritchie Hayward. It also featured a few co-writes with legendary Grateful Dead lyricist Robert Hunter.

“The process was pretty darn amazing,” says Payne, who did this interview a few days before Hunter passed on Sept. 23. “I had never met him. I had never spoken to him on the phone. It had all been through the internet. We started off with one tune and from there it took off in a really nice way, not unlike with the Doobies, I guess. The process was Robert sending me lyrics, and if he needed something from me musically he’d suggest a couple things. We came up with 20 songs. He’s one of the best lyricists in the world, obviously.”

Payne, who is 70 and has been playing keyboards for 65 years, is unsure if the band will make a new studio album anytime soon.

“Sadly, I don’t know. That’ll be a subject that comes up on tour,” he says. “I don’t want to say how realistic that is, whether or not we do an album. I’d love to do it. I’d love to record new songs with Little Feat or do them on my own.”