Flux Capacitor doesn’t appear to want a lazy summer. The Specht brothers – Pete, Jason and Mike – just played Susquehanna Breakdown and are off to another festival: Bonnaroo!

[Wish you could be there? Check out the live stream schedule HERE.]

H81R: How did flux Capacitor get together? 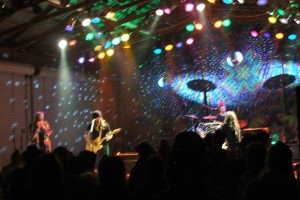 How long would you say the band has been together?

JS: Flux has been together since about 2009. That when our first album came out.

Are the dynamics of this group different because you’re siblings? Does it hurt or help?

JS:  Well, it’s definitely different. Me personally, I feel like we can get a lot more done way faster because we kind of really know… it’s easier to explain ideas that we can just start playing … instead of having to explain to someone what style you’re going for, which occasionally we have to do, but I guess we’re definitely kind of on the same page often, and it just allows things to get done a lot faster.

PS: The brother thing, having us be all brothers, live, when we jam …  a lot of telepathy goes on, and that adds to our sound, because we kind of know what each other are thinking, even if we were just going out to get food. We end up knowing, we can feel each other’s vibes and we kind of know where things are going so the blood connection contributes to the uniqueness of our sound, and also, kind of like what Jason was saying, creatively speaking … I think a lot of times you have to find a musical language to communicate, and then you end up playing certain kind of themes that, while four random people, like, OK, here’s a common language. Our common language can be a little bit stranger, which makes our sound a little more unique with the types of things we end up writing. … We’re basing our songs off of dreams (laughing) and things like that and then painting a picture with the music based off that – things on that level.

What influences your sound?

MS: I think along with what he was just saying, we all have different influences … Sometimes a lot of ideas are based on something that is kind of abstract or a dream or something in nature we saw or one of our adventures we went on on tour or something. … It’s usually something more colorful. We try to imagine a feeling more than – we shoot for a feeling – rather than something more tangible.

Do all of you write, Mike?

MS: Yeah! Yeah, Pete wrote a lot of our songs, the album stuff, then he’ll bring it over and we’ll jam along and come up with different things, but then a lot of our songs we all wrote together on the spot. … It’s between Pete, a few of mine, Jason wrote a couple too.  I don’t know. (laughing) It’s a good mix of everyone.

PS: We definitely creatively expanded our vocabulary of songs tremendously. Since we started, we’ve done three full albums; we’re working on our fourth full album. I think we’re able to write what we’re hearing in our head a lot more efficiently than when we started in the beginning. Even writing our set list for live shows, the amount of different songs and ideas that we have created has been pretty vast. It’s kind of hard to judge yourself, scientifically speaking, if we could step out. We’ve played nonstop over the years, so it’s rare that you get enough time to really look at what you’re doing. … I guess just looking back at videos, all those archetypes we got in our head, like powerful sound, something that we really slam down with, I think we’re just bringing it to life more and more. 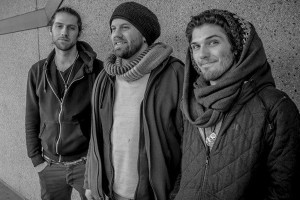 Pete, since you mentioned an upcoming album, can you tell us a little about that?

PS: Our first album is “They Know We Know,” which we released in 2009. All sorts of creative stuff on there. Mikey joined the group, got in the studio and really brought keyboards to the forefront of our sound. Jason helped me write a lot of lyrics and came up with a lot of cool riffs on the keyboard as well while playing the drums on the whole album. Then we did our second album in Seattle. It’s called “Monolith.” We recorded that with a producer named Jack Endino, who we were big fans of because he did Nirvana’s first record and Soundgarden’s first Eps, and he’s pretty well-respected dude in the whole Seattle scene that emerged in the ’90s. It’s still super cool. Then we did our third album independently with our sound engineer who we respect his talent. His name is John Decker, and that album is called “Cycle 9.” We got super creative on this record. The other two producers we worked with, we hold them in high esteem and they’re well-regarded, but it wasn’t like someone who is part of your crew, so we were able to get even more comfortable on the third record. And we decided to record our fourth record with [Decker] too. We’re in the beginning process of that album. We’ve laid down about eight tracks so far. It’s coming along really good. We’re really excited about it. It’s very diverse. There’s some slower songs – slower songs than we’ve ever done before – then there’s some faster songs – faster than we’ve ever done before.

When is the album coming out?

JS: Well, right now we’re almost getting to the middle of the process. I’m not positive, but we’re thinking in the fall it’ll probably be ready. Maybe October or so?

So you’ll be coming off the wave of the summer festivals like Peach Fest and Bonnaroo, and then people can go home with new music.

Speaking of Bonnaroo, how psyched are you for your first time there?

JS: We’re like, beyond excited. It’ll be so huge, and we’re super pumped. I had been there a couple years ago and … it was the most awesome huge festival, and I was like, “The next time I come back, it’s going to be because we’re playing there,” and now it’s happening so it’s just super awesome. And we’re playing at 10 p.m. on Friday night. We’re just gonna go nuts. (laughing)

Anyone in particular you’re excited to see or meet or jam with?

JS: I’m excited to see Pearl Jam. I’ve never seen them, and they’ve been doing a lot of crazy stuff live lately like playing old albums or busting out different covers. I really want to see Tame Impala. They’re doing a late night set. I heard good things about them. The Dead and Company is going to be awesome. There’s just a ton of stuff …

MS: Oh wow. SHIT. Well, perform with there’s a lot of people living and dead. … I think it would be cool to hang with an older jazz player … I guess a band I’d want to play with, I’ve always loved Medeski Martin & Wood.

JS: Jason! Well, I was thinking, like I would love to play drums in Pink Floyd in the ‘60s. The later ‘60s when Syd Barrett was still in the band … I would like to play drums during that time.

MS: I didn’t know you meant play in the band! (laughing) I was thinking we’d open for them. (laughing harder)

JS: (laughing) Do you? Oh, I meant I would be in early Pink Floyd.

MS: I don’t want to step on Medeski’s toes. 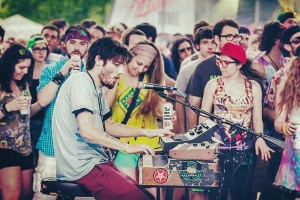 JS: (still laughing) Well, I don’t know. I figure Nick Mason would let me play. and I’d be happy. As far as chill with someone, I’d probably like to meet Thom Yorke [Radiohead] and just talk to him and just hang out for a while. I’d ask him a bunch of questions, and he’d be like, [sucks teeth] “I don’t wanna answer that.” (laughing)

Even if he made you take off your pants and sit there naked or he climbs you like a koala and you’re the eucalyptus tree?

Now, Mike did you want to amend your answer?

MS: See, I was thinking that when you asked who to play with, I was thinking our band with them, but to physically fit in with people … If I could be in a band and play keys for the show, it would be…. SHIT… Jason said Floyd, I was gonna say that too. … It’s tough. I could stand to play some A and B and keys in a Radiohead show. (laughing) Or sit in and play some organ with Miles Davis and have him school me. (laughing)

Anything we haven’t talked about that you’d like people to know?

JS: We’ll be back having a blast at the River Street Jazz Café in Wilkes-Barre in the fall. We’re looking forward to that.

For more tour and festival information for Flux Capacitor, check out the band’s website.

This interview has been edited for length.