While it’s not officially a Ween release, the Dean Ween Group’s debut, “The Deaner Album,” should slake the thirst of fans who have been waiting since 2007 for new material. All of the beloved band’s calling cards are here: classic rock riffs delivered without a hint of irony; a schizo smorgasbord of influences, from country to jazz fusion; and unapologetically coarse humor.

The live iteration of DWG, which has been playing live for a few years, includes Ween touring members Dave Dreiwitz (bass), Claude Coleman Jr. (drums) and Glenn McLelland (keyboards), and they all contribute to the album, as do DWG member Bill Fowler (guitar) and guests Curt Kirkwood of Meat Puppets, Joe Kramer and Chuck Treece. While the Deaner handles all instruments himself on three songs, working with longtime associates gives the album a cohesive feel of a veteran unit rather than a band making its studio debut.

The DWG kicks of the record with “Dickey Betts,” an unabashed tribute to the Allman Brothers. In the vein of “Jessica,” Dean and Kramer knit together sunny, spiraling guitar lines while McLelland does his best Chuck Leavell on piano. It’s a smooth and inoffensive opener, setting the table for the sarcastic “Exercise Man,” a snarky and profane attack on that annoying guy that takes his workouts just a bit too seriously. Slide guitar throughout adds not only a layer of hypnotic haze but also melodic drive.

Much like many a Ween album, the rest of the songs, loosely speaking, follow the template of “Dickey Betts” or “Exercise Man” in spirit: carefree ’70s classic rock or bizarre excursions. Sometimes both. In “Bundle of Joy,” Dean himself plays a hard rock drum pattern underneath crunching guitar riffs, singing about spending his last $20 on cocaine. “Charlie Brown,” one of the tunes on which the Deaner plays everything, is smart sludge rock reminiscent of Helmet. “Schwartz Pete” is a quirky swing instrumental, and “Garry” is a pleasant blues-rock instrumental.

Midway through the CD comes “You Were There,” a relatively nondescript tune, but a highlight nonetheless. It’s carefree alt-country, with sugary vocal harmonies on the choruses. But before you get too comfortable, there’s “Gum,” an ode to, well, chewing gum, that brings to mind the sophomoric outlandishness of “The H.I.V. Song” from Ween’s 1994 masterpiece “Chocolate and Cheese.”

The fact that the DWG is able to genre jump while maintaining some sense of constancy is remarkable, such as the stretch from “You Were There” (alt country) to “Bums” (Queens of the Stone Age-inspired modern surf rock) to “Gum” to “Nightcrawler” (Detroit garage rock and early ’70s glam, a la The Stooges and early Alice Cooper). Oh yeah, then the band dishes out some Prince-inspired funk on “Mercedes Benz,” the rockabilly on steroids “Tammy” and the album-closing trippy, smooth instrumental “Doo Doo Chasers.”

Familiar without being derivative, funny without being stupid, “The Deaner Album” is a must-listen for Ween followers. In other words, to borrow from Billy Shakespeare: A Ween album by any other name would smell as brown. 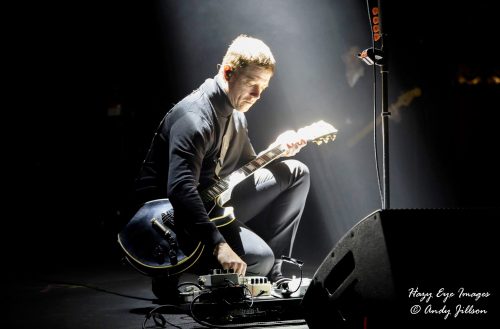