When Dar Williams hits the stage at New Hope Winery on Sunday, Dec. 22, you can rest assured that she won’t be going through the motions.  In fact, from the sound of it, the singer/songwriter is just as invigorated by performing as she was when she began her career more than 20 years ago.

“Ya know, I grew up with two big influences,” Williams said during a recent phone interview from her home in New York’s Hudson Valley.  “One was theater, and one was really my world of singer/songwriters that I came up with.  So I love the familiarity and access that you feel with a singer/songwriter show, but theater is a lot about ‘what’s your point?,’ so I’ve been doing a lot of good warm-up before shows.  I did one workshop with Sloan Wainwright and came away feeling more committed to doing my pre-show warm-ups and pushups and sit-ups.  So it’s energetic and I love my job, and I still love my job, and I’m happy to arrive on the stage and have that.”

Williams’ most recent album, “In The Time of Gods,” released in 2012 on Razor & Tie – which has released all of her albums thus far – is premised on Greek mythology.  Williams said her interest in Greek mythology sprung from a freshman course she took called Touchstones of Western Values.

“A lot of these ancient stories that have come up through time are really the story of how we choose to move, how we chose to be civilized, despite disastrous weather events and the rise and fall of governments and economies and those things, and it turned out it was a fun experience to include all of these elements of civilization,” she said.

Williams will also celebrate the 20th anniversary of her debut record, “The Honesty Room,” with special shows at The City Winery in New York on Feb. 27, the Keswick Theatre outside of Philadelphia on Feb. 28 and First Parish Church in Cambridge, Mass., on March 1.

“There is still sort of a feeling in the air of what happened in those first three years of my career:  ‘The Honesty Room’ coming out and (second album) ‘Mortal City’ coming out and being on the road with Joan Baez,” she shared.  “There are a lot of people coming to shows that were there then, so the sense that we’ve always sort of been on this road together was on my mind.  So we thought it would be nice to do these kind of small tributes to the origins of the album in the cities where things really took off.

“And I wrote a little something about it, and we put it on Facebook, and I’ll get 10,000 hits on something if I post about where I’m going to tour or something that happened to me but, at the end of the run of this thing, there were 60,000 people who viewed it and hundreds that commented on it.  It’s kind of like, ‘I’m a big fan, especially of your older stuff,’” she said with a laugh.  “That’s still the heart of my career, that first album, so it’s been a great career.  So it’s not that it petered out.  It’s grown from there.  That’s the album that people resonate with, I think, because of the song ‘When I Was A Boy,’ for the most part.”

We asked Williams if it is at all odd to sing songs from “The Honesty Room” 20 years down the road; do they almost feel like they were written by someone else?

“No, because every song just leaves a real mark on me,” she said.  “But I do go back in time to when I wrote it and that happens.  So it never feels like a different person; it feels like a different time.  It’s a good question, but I feel very connected to that kid with the bad haircut sitting on her futon pining about a breakup and trying to make good friends in Northampton, Mass.  That’s who I was.

“A friend gave me a little sticker that said ‘Your dreams might come true, so make sure you’re dreaming big enough.’  I remember sitting there with no friends, no prospects, no gigs and a housecat that kept throwing up on my bed.  I said, ‘Let’s the set the bar lower and just write these songs.’”

Williams, who spends much of her time on environmental issues, said she is involved with “three very specific things”:  arts outreach for kids, renewable energy and community gardens.  She also recently became a contributor to the Huffington Post’s Green Blog.

“Pete Seeger lives up the road.   It’s a great community of musicians and people who just love the Hudson River and feel a real connection to it.  So it’s perfect for me.” 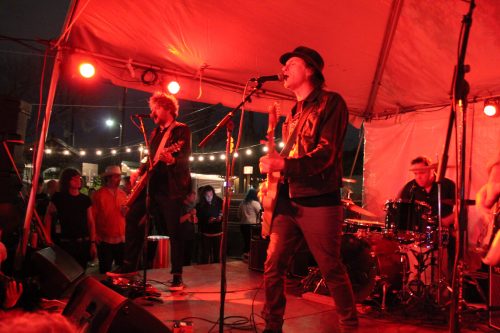