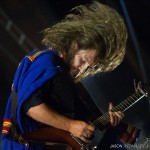 The Mann Center for the Performing Arts is tucked away in the Centennial district of Philadelphia’s Fairmount Park. On Friday, Aug. 17, fans headed to the park to hear Southern indie rockers My Morning Jacket and Band of Horses.

My Morning Jacket is known to travel with bands that can easily headline their own tour, i.e.,Neko Case c. 2011. This holds true with Band of Horses, who are often compared to MMJ. Admiration was evident when singer Ben Bridwell playfully opened BoH’s set with the announcement, “You’re about to see the greatest rock band. … ’Til then, you have us.”

The wood-paneled, tree-flanked stage of the Mann could easily be a Band of Horses album cover. Looking around, Bridwell confirmed the aesthetic connection: “Man, this place is awesome!” BoH began aptly with “The First Song,” off their 2004 debut, “Everything All of the Time,” and ended the 12-song set with a cathartic, crowd-rousing delivery of “The Funeral,” off the same album. The quintet played favorites from all three albums including their anthemic ballad “No One’s Gonna Love You,” the low-end heavy “NW Apt.” and the upbeat, yee-hawing “Weed Party.” Band of Horses also played two unreleased songs from their upcoming album, “Mirage Rock,” available Sept. 18.

My Morning Jacket are active with social media, interacting with fans via Facebook, Twitter and their fan club site, Roll Call. Through Twitter, they’ve launched the Spontaneous Curation Series.  Fans are encouraged to request songs via Twitter including a hash tag of the upcoming show, i.e. #MMJphilly.

My Morning Jacket opened their Philly show with a Twitter request, “Xmas Curtain.” Among other requests, MMJ performed a carnival-esque “Into the Woods,” off 2005’s “Z,” complete with pools of rotating, candy-colored light and a top-hatted Bo Koster on keys, followed by the live rarity “Evelyn Is Not Real” from 1999’s “The Tennessee Fire” which ended in a still, Phish-style silent jam. The quintet also performed “Touch Me I’m Going to Scream” parts one and two from 2008’s “Evil Urges,” for which Jim James brought to the stage both his omnichord and some serious dance moves.

The 25-song set included a 45-minute-long encore that opened with a heart-swelling rendition of “Wonderful (the Way I Feel)” in which James was joined by Bridwell. The duet’s soaring harmonies and brotherly affection were followed by high-energy performances of “I’m Amazed,” The Band’s “It Makes No Difference,” and live classics “Off the Record” and“One Big Holiday.”

SLAYER GOES OUT ON TOP WITH SOME HELP FROM LAMB OF GOD, TESTAMENT, ANTHRAX and NAPALM DEATH