It sounds like an apocryphal legend, but it’s true. In the heyday of the coal mining industry, workers would bring caged canaries into the mines. More sensitive to poisonous gases than humans, the birds would perish before the miners would detect the problem, letting them know it was time to head back above ground.

Northeastern Pennsylvania musician David Hage chose the moniker Coal Minor Canary as his performing name, a title that hearkens to the bleak but important economic and cultural history of the region. The name also holds a bit of mystery, which is fitting for Hage, a progressive fingerstyle guitarist whose songs, which you can hear on his recently released debut EP, “3:42,” are intriguing and difficult to pin down.

With several area performances scheduled for September and October (the full dates are at the bottom of the article), we chatted with Hage about Coal Minor Canary, his unique mix of influences and his distinctive guitar style.

Tell us about the writing and recording process for “3:42.”

It happened in the context of a relationship ending. It was just one of those things, as the story unfolded as the relationship did in terms of how it evolved into something that I recorded. A friend of mine, Dennis Condusta from the band Astorian Stigmata, had offered to record me a few years ago and I never got around to it. At this point I wanted to finalize these ideas because I was really connected to them.

Despite the obvious folk and Americana influences on the EP, it sounds like there are some other things going on too, like maybe a punk or hardcore approach on your vocal phrasing.

There are a lot of merging styles. My uncle is a guitar player, and he used to play fingerstyle guitar. He was into Phil Keaggy, who I believe Jimi Hendrix said was the best guitarist in the world. He played in weird, alternate tunings. I listened to Jon Gomm, Andy McKee, who use open tunings and play fingerstyle. I came across a YouTube video of Chuck Cannon, a country guitar player and Grammy-winning songwriter in Nashville. I ended up changing one of the string’s tunings so it kind of gave everything a little different feel. I corresponded with him on Facebook.

Being from NEPA, I was into the heavier music scene when I was younger. Also the folk and bluegrassy kind of thing. I play with a thumb pick. I refer to my music as dusty, black diamond music. Abstractly, it describes it well. It might be in some part of the indie rock, post-rock kind of thing.

Before you got into fingerstyle guitar, what did you listen to?

In terms of songwriters, David Bazan and Headphones, Damien Jurado, locally Lewis & Clarke was a big influence on me. Tall Tall Trees, The Tallest Man On Earth, Mike Kinsella. I was a big fan of Bob Lewis locally. He gave me my first gig at the Coal City Tavern on the main road in Luzerne. He split the case with me, and it made me feel legit.

There’s a nice quote from Mike Mizwinski, aka Miz, in your press kit. What is your connection to him?

I played a couple shows with Mike before I developed the name Coal Minor Canary. I took lessons from Mike for maybe a month or two and stayed in touch, and I’ve always been a big fan of his music. I’m a big fan of local music in general. I think Mike’s a great guitar player.

What’s next for you?

I’m always writing. I probably have another album’s worth of material from previous material, but I wanted to achieve a specific thing with this EP. I would like to do more traditional and the local folk music thing. But I also got a new pedal board I’ve been putting together and I’d like to write some stuff in the vein of Mike Savino from Tall Tall Trees, do something more experimental. 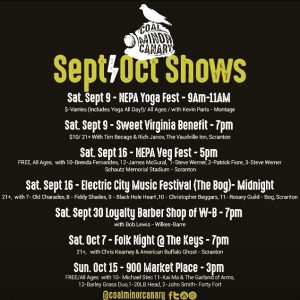