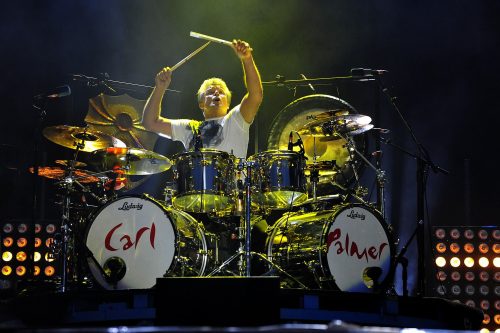 Emerson, Lake & Palmer is in the midst of celebrating its 50th anniversary, and with only one of the three members, drummer Carl Palmer, still alive, it has fallen on him to lead the charge. He’s been heavily involved in the release of new 10-LP, 7-CD box sets called “Out of This World: Live (1970-2017)” and is the executive editor of the band’s first official book. A visual artist as well, Palmer has created a new collection based on the five main ELP studio albums. And he’s touring with his band, Carl Palmer’s ELP Legacy, working on ways to play live along with footage of his late bandmates (look for a tour based on that next year) and is in talks for a movie based on the band’s 1971 extended track “Karn Evil 9.”

Speaking with Highway 81 Revisited in advance of Carl Palmer’s ELP Legacy concerts at The Iridium in New York (Wednesday, Nov. 17) and the Mauch Chunk Opera House in Jim Thorpe, Pa. (Thursday, Nov. 18), Palmer pinpointed what has made the body of work he produced with Keith Emerson and Greg Lake stand the test of time.

“The thing is that the music is so eclectic and so deep,” he says. “If you think about it, not only are there classical adaptations like ‘Pictures at an Exhibition’ and ‘Barbarian’ as part of the group’s makeup and musicality, mainly because we’re European, I think the difference that we have to a lot of other bands is we’ve had the love songs. We had ‘C’est La Vie,’ ‘From the Beginning,’ ‘Still You Turn Me On,’ ‘Lucky Man,’ which are not prog. They’re three chords and they’re pretty songs, but they’ve been treated with the latest technology of the day, and they sound pretty cool. I mean, ‘Lucky Man’ had the big, iconic, Moog solo, and that was important to a lot of keyboard players. So the music has a lot of depth, and once you’ve heard these breezy sort of ballads, you then move into things like ‘Knife Edge’ and ‘Barbarian’ by Bartok, and then there’s things like ‘Pictures,’ and then we had our own conceptual piece, ‘Tarkus,’ which I’m still not clear what it’s about (laughs), but what a fantastic piece of music.

“So it’s been quite a journey, really. Of course, the music has stood the test of time mainly because it’s not of the norm, and I don’t want to sound pompous, but it is a little more intellectual than most.”

Palmer’s ELP Legacy, like ELP, is a trio, but without keyboards. Paul Bielatowicz plays guitar and Simon Fitzpatrick handles bass and Chapman stick. While Palmer started this band as an instrumental combo, Bielatowicz now adds vocals.

The tour, which is Palmer’s first since 2019 thanks to the COVID-19 shutdown, is part of his three-year drive to mark ELP’s 50th anniversary. The group released its self-titled debut album in 1970, followed by the iconic albums “Tarkus” (1971), “Trilogy” (1972) and “Brain Salad Surgery” (1973). Emerson on keyboards, Lake on bass, guitar and vocals and Palmer last performed together in 2010 for a one-off, 40th-anniversary reunion at the High Voltage Festival in London. Emerson died by suicide on March, 11, 2016, and Lake died from cancer on Dec. 7 of the same year.

In 2018, Palmer began researching how to perform alongside his late bandmates. He said he looked into holograms and attended a Frank Zappa hologram concert. “You know, they’re pretty good, but they’re pretty spooky, and depending on where you’re sitting, they do cause problems,” he says, noting it might work better for a solo artist, such as Ronnie James Dio, whose estate recently put on a tour that featured the late heavy metal singer’s hologram.

“I thought, there’s got to be another way,” he says. “I came up with the idea to use some footage that was created many years ago of Emerson, Lake & Palmer, two concerts at the Royal Albert Hall in London. We filmed both nights and the audio feeds were fantastic both nights.”

Palmer’s Legacy band has already worked on playing along with footage from about five songs from the 1992 footage, including “Hoedown,” “Lucky Man” and “Knife Edge,” he says.

“I’m seeing some stuff in January and hoping to launch it at the end of 2022,” he says. “I don’t know how many songs. There’s five at least integrated into the set that I already play.”

While ELP was just three band members, the band filled up the stage with loads of equipment and over-the-top performances. Emerson was known for slicing up his organ and playing it backwards, and Palmer’s drum solos were (and still are) epic and demonstrative. Noting that he was influenced by the likes of Gene Krupa and British drummer Eric Delaney “who had a revolving riser like I once used to have,” Palmer explains how the showmanship became a cornerstone of ELP.

“Basically, the whole ELP idea at the time was, once we knew this style or brand of music we were going to play, we needed to try to present it as theatrically as possible, and whatever we added theater-wise must complement the music,” he says. “It wasn’t there just for excitement or eye candy, it was meant to mean something. I kind of conducted my drum solos like that. I made sure that they were technically solid and they had everything in then, and if it means me playing two gongs to get a visual aspect and a different sonic sound, then I would do that, and I still do it today.”

Next year will mark another big milestone for Palmer: the 40th anniversary of the first album by the supergroup Asia, who he was a member of along with guitarist Steve Howe of Yes, keyboardist Geoff Downes of Yes and The Buggles, and bassist and vocalist John Wetton, who worked with a laundry list of bands, including King Crimson and UK. Wetton died in 2017 after a battle with cancer. Various incarnations of Asia have performed the past few years, including with Ron “Bumblefoot” Thal on lead vocals, a long-time guitarist who’s played with Guns N’ Roses and others.

“There are no dates at all, but we definitely would like to do it,” Palmer says of an Asia reunion in 2022. “I’m looking at possibly some time (this week) I might be with Yes ,I don’t know. Steve and Geoff realize something will need to be done and very much would like to do that. We have a new singer, as you know, Bumblefoot. We would like to do it, it’s just a case of slotting it all in. We know we need to do it.”

All of the work, Palmer says, has helped him cope with the losses of Emerson, Lake and Wetton in such a short span of time.

“It’s definitely helped because it was such a shock the way all the individuals went, or died,” he says. “Asia, obviously I’d like to do more — because Steve Howe and Geoff Downes are in Yes together, we’d have to time it. With ELP, which is obviously closer to my heart, that, for me, I’m just trying to do what Greg and Keith would have liked me to do.”