Bombino — born Goumour Almoctar — is one of the most beloved world music artists on the planet. Noisey has called him “the world’s greatest guitarist,” the New York Times dubbed him “the Sultan of Shred” and his latest album, “Deran,” hit the top of the iTunes World Chart.

This year, he became the first artist from Niger to be nominated for a Grammy.

Bombino’s backstory is wildly unique for most Western audiences. He’s a member of the Ifoghas tribe, which belongs to the Kel Adagh Tuareg federation. The Taureg are travelers of the Sahara Desert, nomads descended from the Berbers. The music of his people is known as “ishoumar,” or rebel music.

Bombino, 39, has blended ishoumar with Western sounds, leading him to the aforementioned commercial success in the English-speaking world, as well as collaborations with members of the Rolling Stones and Dan Auerbach of The Black Keys. On Thursday, Oct. 17, he’ll play at the FM Kirby Center in Wilkes-Barre, Pa., along with Mali guitarist Vieux Farka Toure, who’ll play separate sets as well as with Bombino. Tickets are only $10 (plus fees) thanks to underwriting from the Pennsylvania Council on the Arts.

We recently caught up with Bombino, with the assistance of a translator.

How did the ishoumar music influence you?

Well, ishoumar music really means Tuareg music from my region. So one could say that my music is also ishoumar music. I grew up listening to traditional Tuareg music so this of course was the foundation for my own music. I began to play only after discovering Western guitarists, so when I began to play my own music it was naturally a mix of Tuareg and Western rock styles.

How did you react when you first heard Western music like Jimi Hendrix?

It was love at first listen. I was a child of about 10 years old when I first heard Jimi’s music and it almost made my heart explode. I became obsessed, he was instantly a hero to me and I vowed to learn to master the guitar like he had. He seemed so free playing his guitar, and as a refugee at the time this was what I wanted for myself more than anything. So this was motivation for me to teach myself the guitar and use it as my ticket to freedom. 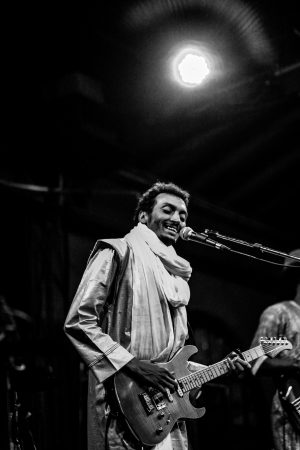 What was it like recording with Keith Richards and Charlie Watts?

To be honest, when I recorded with them I did not have any idea who they were! I thought they were just these older, crazy guys. They were very friendly and warm, we had a nice time in the studio recording with them. But, it was only later when everyone began asking me about it that I realized that these were huge rock legends. In my region, no one knows about the Rolling Stones.

How do the Taureg people treat you when you return home now that you are well-known worldwide?

I always receive a very warm welcome when I return home. Especially when I came home from the Grammy awards, that was one of the proudest moments of my life, as there were thousands of people that came out to welcome me back with a parade! I am eternally honored to be able to represent the Tuareg people, culture and music around the world and I take this role very seriously. The people in Niger understand this and appreciate this. It is wonderful to feel such support from my community at home. It keeps me motivated during the harder times on the road.

What have you learned and incorporated from Western musicians like Dan Auerbach?

I think the most important thing I have taken from my experiences with artists from the West like Dan Auerbach or Dave Longstreth is to present my music in a polished, professional kind of way that appeals to audiences in the West. In Niger we are not so concerned with making the beginnings and the endings of the songs perfectly neat, or having certain arrangements in the songs, or being concerned with the length of the song. All of these things are Western concepts, and I learned little by little how to bring these concepts into my own music. If you listen to my early music and my music today you can easily hear the difference that my experiences in the West has made.

What responsibility do you feel to educate your listeners about the Taureg people and their struggles?

I feel this is the most important part of my career. Of course it is very important to provide for my family back home, but the greater mission of my music and career is to spread love and awareness of Tuareg culture around the world. We Tuareg are an endangered culture in today’s modern world which is more and more like one big village, so it is very important to preserve the beauty and traditions of Tuareg culture. This is the responsibility of the artist in our society, and it is especially important for artists that have the good fortune of traveling to share their music. So, this responsibility is always on my mind, especially when I am outside of Africa.

Who are your favorite guitarists and singers?

We are working on a big new album project now, but it is not ready to be discussed publicly. For the rest of 2019 I will be touring until December and will then spend time with my family in Niamey, in Agadez, and will end the year in the Tenere desert where I get my inspiration to carry me through the following year.