AARON FINK’S ‘WOLVES & BUTTERFLIES’ IS A SONIC JOURNEY WORTH TAKING

Four albums into a solo career since he departed platinum-selling alt metal band Breaking Benjamin, Aaron Fink has proved, without a doubt, that he is more than a guitar star of the “active rock” genre. In fact, if you didn’t know about his decade-long run with that group, you wouldn’t be tipped off by the music he’s created since. That’s especially true on “Wolves & Butterflies,” his newest release.

With Fink calling the shots — and singing, and playing most of the instruments — the listener gets a personal and diverse dose of music, thanks to Fink’s tastes and tendencies, which run the gamut from rootsy Americana to the dark, grunge-y rock that dominated the airwaves and MTV in the ’90s.

Fink kicks things off with “Sweet Tooth,” a funky yet heavy track. The wah-wah guitar, locked-in drums and Leah Francisca’s backing vocals, combined with Fink’s straightforward singing, make for a layered and interesting tune; if the choruses weren’t catchy enough, the bridge, led by a slinky bass line, does the trick. “Rocksteady,” the second song, is equally pleasing, if not more so; it is essentially a reggae song, but filtered through a rock lens. The chorus might remind some of the swagger of Stone Temple Pilots.

The aforementioned Americana rears its head three songs in, on “Golden Days.” If STP was previously conjured, we’ve now taken a detour through E Street, with a heartfelt, Springsteen-esque vibe. It’s a less-is-more approach, with what sounds like mandolin adding some flavors, but there is a really well-executed, dark guitar solo, too. “Big Bad World” follows a similar singer-songwriter blueprint, but it earns its keep here by not being a carbon copy of “Golden Days” by any means.

“Good Man Down” is quite adventurous, melding Celtic and Eastern flavors, a la some of Led Zeppelin’s more worldly work. Fink’s impassioned, pleading vocals blend perfectly with the instruments, as a mysterious mandolin figure adds intrigue. It depends on your personal preference, of course, but the track might be the album’s best moment.

The title track brings us back to more typical rock territory, but the dark element of “Good Man Down” and some Eastern flavors are still present. Fink’s knack for choruses that are melodic but not overly sweet is again on display.

“Melody Lane” is an autobiographical, country-tinged song, with Fink revealing he was “born on a morning in the spring of ’77,” “the son of a writer, who with his pen he bares his soul/ my mother to some a teacher, but to me just my angel.” He goes on to tell the tale of an outsider in school learning the guitar, having “my first drink and my first love” under a trestle. While the memories are specific, they are relatable and universal. Next, an acoustic guitar intro and a David Gilmour-like, airy, moody electric guitar blend beautifully on “Life is Just a Dream,” an atmospheric instrumental tune.

As “Wolves & Butterflies” nears its conclusion, “High Plains Drifter” is a widescreen, cinematic tune, another expertly crafted and arranged selection, layered but not overly adorned. A guitar solo again conjures Gilmour, whether or not that was the intention; like the Pink Floyd legend’s memorable playing, it soars and sounds effortless.

The record wraps up with “Love Bombs,” a relatively standard rock track compared to some of the more exploratory work here. “Just make me happy,” sings Fink, who’s “sailing on to better days.” It’s a fine conclusion to “Wolves & Butterflies,” which, like its title suggests, is a deep exploration of light and dark, good times and bad times, soundtracked by an artist who continues to explore the nuances and complications of music and the life experience itself. 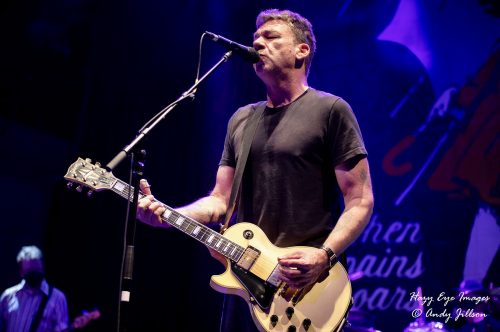