When many Grateful Dead fans talk about the band and their fellow Deadheads, they use the word “family.” For Grahame Lesh, though, it goes a bit deeper than that.

Lesh, the son of the Dead bassist Phil Lesh, grew up on the road with the band, bouncing from show to show in the mid 1990s, when the group was at its commercial peak.

“I was growing up at their biggest point. ‘Touch of Grey’ came out when I was less than a year old,” Lesh, 29, who plays guitar and sings in the band Midnight North, said during a recent phone interview. “That’s when they went from playing arenas to playing stadiums. Maybe I still haven’t wrapped my brain around it. Something like the Fare Thee Well concerts last year, that blew my mind. What other band can do that when the most famous figure has been dead for 20 years? And they can sell out football stadiums for five shows?”

Midnight North, which has become a fixture in the San Francisco Bay Area scene with frequent performances at venues like Phil Lesh’s own Terrapin Crossroads, kicks off an East Coast run this week at the River Street Jazz Cafe in Wilkes-Barre, Pa., on Wednesday, Oct. 26 and The Ardmore Music Hall on Thursday, Oct. 27. The band will then hit several other venues in the Northeast, including Brooklyn Bowl (Oct. 29) and Garcia’s at The Capitol Theatre on Halloween. Last summer, the band released its second studio album, “Scarlet Skies,” and its live album “Live at Terrapin Crossroads” is available for free download.

Lesh, who earned a bachelor’s degree in communications and a master’s in music science technology, both from Stanford University, chatted with Highway 81 Revisited about the development of Midnight North — which also features Elliott Peck on vocals, Alex Jordan on organ, guitar and vocals, Connor Croon on bass and Alex Koford on drums — the Grateful Dead’s influence, jamming with his dad and much more.

How has Midnight North changed since the band initially got together?

We’re more of a band now than a collection of musicians. I started playing music with two folks and sort of informally jamming with Connor and our original drummer Eric, and Conor brought in Elliott, who’s our other singer. Now, hopefully you can’t tell the difference between what I wrote and what Elliott wrote and what Alex wrote now.

You have some beautiful vocal harmonies in the band. How did you hone that?

We all loved singing before Alex Jordan joined the band. We were doing 2-part harmonies, 3-parts take it to the next level, for sure. Technically Alex and I will switch off who is the lower part and Elliott will be the higher part, but even that’s flexible.

Besides the Grateful Dead, who are some of the other musical influences the band members share?
Early on it was a lot of sort of early country rock. We did a lot of Gram Parsons songs when the band was starting. Then it became more singer-songwriter than any kind of jam bands and Grateful Dead influence that you would think of. But obviously that’s another influence. The more we played, the more we found additional common influences. CSNY has been a big one, big 3-part, even 4-part harmonies, is something we really dug into. And it’s hard to avoid any influence, for any of us, from the Grateful Dead.

As a music fan, who are some of your favorite artists to listen to?

That all changes too, similar to our influences. I’ve been really into a lot of the cool sort of, I don’t know the genre, Sturgill Simpson, Jason Isbell types. I’ve always been an incredibly big Ryan Adams fan and all 6,000 songs he’s written or whatever (laughs). And there’s amazing music happening in the Bay Area with our scene. I’m always stunned when we get to watch a band like Mother Hips or players like Jason Crosby.

What did you listen to growing up?

I think I went through a pretty typical progression that a lot of younger fans do. I listened to a ton of Grateful Dead and all the songs that they covered and played, like the Beatles, Dylan and the Rolling Stones. When I was in high school I got into Metallica a lot. I think that’s pretty typical of a teenager in certain places. It was pretty classic rock-focused, and then you just sort of open up. And I think a lot of it came from Napster and then Spotify and Pandora, which recommends music and all of a sudden you’re discovering obscure bands and songs.

Why do you think the Dead’s music has remained so popular 50 years down the road?

I think the easiest answer is just that the songs are so good. I’m not gonna talk shit about anybody, but there are a lot of people in the jam band scene that aren’t songwriter first, I think, and the Grateful Dead were amazing players and amazing at jamming, but those songs…My God, all of Bobby’s songs, the Jerry songs, the few that my dad wrote, they’re stunning compositions. I think that’s something that’s more timeless than a single show.

In your father’s book, “Searching for the Sound,” he talks about you and your brother Brian being on the road, watching Dead concerts from the stage. He writes about Jerry Garcia connecting with you and playing to you as you watched. Do you remember any of that? 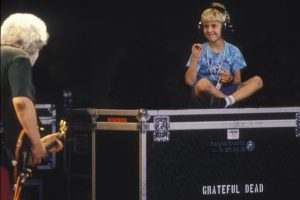 Photo by Susana Millman, author of the soon to be released photo memoir “Alive with the Dead: A Fly on the Wall with a Camera.” Used with permission. Vist her website at http://www.mamarazi.com

Not really. I was 8 when Jerry passed. We’d go to a lot of first sets. Not really memories as much as flashes that go by. We’d just sit there, and all the band members and crew were like my uncles or family friends. I don’t think when I was that age I understood the enormity of it all. I liked the music, obviously, and I still do. It was pretty special.

Your dad also writes about you convincing him to finally play “Unbroken Chain” live in 1995. Do you remember that?

I do, vaguely. I mostly think I was just listening to “Mars Hotel,” and I really liked that song, and talking about how good the songs are; that crazy composition, great lyrics and melodies. If I’m 6 or 7 years old at the time, there’s no way I understand that, but now I’ve played it a bunch, and I get it. I think I said something to the effect of, “Why haven’t you ever played this?” And I guess childhood innocence or ignorance must’ve made my dad realize, “Why haven’t we?” Yeah, it’s really cool that they busted it out, and they did it at Fare Thee Well. It’s a cool song, there’s no reason not to play it. It’s cool to be part of a special moment.

What are your thoughts about John Mayer playing with Dead and Company? Did you think he’d make a good fit?

I haven’t really thought about his fit specifically playing this music, but I’ve been a fan of his for a while. I went to one of the first John Mayer Trio shows in 2005 or something. He’s kind of always been secretly an amazing player. I think it’s really cool that someone at his level in the pop world and in like the guitar world would turn his energy to the Grateful Dead catalog. I didn’t really have any doubts. I think Bobby was sounding great, and I loved Oteil’s playing, been a fan of his and knew him through his connection with Derek Trucks and Warren Haynes. And I love (Jeff) Chimenti.

I think I’m just trying to keep up, which is crazy. (Editor’s note: Phil Lesh is 76 years old). We do these crazy long shows at Terrapin Crossroads, and he’s still going strong at hour four. Us younger folks are like, how are you doing this? It’s amazing. What’s cool is that he can sound like himself even though he’s not playing something he’s ever played before. If we’re bringing a unique idea to it, then it leads to some very cool stuff.

It’s great. I’m not gonna break any news or anything, but he had his scare about a year ago, and it was just that, luckily. 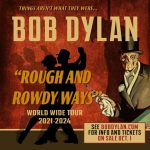