THE MAGUAS REFLECT ON THEIR JOURNEY SO FAR

The Maguas might appear to be the latest band to emerge from a Scranton/Wilkes-Barre punk scene that has spawned the likes of The Menzingers, Tigers Jaw and Title Fight. But the young group, whose members met at Valley View High School, kind of came out of nowhere.

“I think in 2009 or 2010 I loved Terror on the Screen, and my brother was friends with Nate Hosie and those guys, and those were the only local bands I knew. I wasn’t part of the scene,” said Maguas drummer Brandon Ossont. “I went to college and met Vinny from Alma Mater and we were in a little band together — we didn’t play out or anything. I moved home for a little bit, and I wasn’t really aware or anybody until we actually started playing.”

And singer Erik Miller, whose soaring vocals you can hear on The Maguas’ new single, “Will It Ever Be The Same,” started off playing in an acoustic duo.

“We started [The Maguas] the summer of 2018,” Miller said. “At that point, people like The Menzingers and Tigers Jaw were some of my favorite bands already, and I actually didn’t even really get into that until maybe 2016, 2017. That’s when I really started getting into the pop-punk, emo, alternative type of thing. I really just played with Jenkins [Maguas guitarist, Matthew], we just did acoustic stuff, so I got to know people who were members of bands. I was never really in a band since high school until we started The Maguas. … It’s tough to get in the groove and find shows when you’re 15, 16.”

The band has released a debut EP, “Good Beer,” before heading to Lumberyard Recording in New Jersey this January to work on a second EP, due Nov. 20, with producer Nik Bruzzese of pop punk band Man Overboard.

“One of my favorite bands is The Wonder Years from Philadelphia, and they had recorded ‘Burst and Decay’ at The Lumberyard,” Ossont said. “I reached out, and truth be told we didn’t even realize that it was Nik from Man Overboard and Ace Enders from The Early November halfway through our discussion of planning to go there.” (Bruzzese and Enders run the studio.)

The first songs released from the upcoming EP were “Glum” and “Actions Speak Louder Than Words,” which garnered a combined 65,000 streams in less than two months. Ossont, who wrote the lyrics for “Will It Ever Be The Same,” said the song is a celebration of the band’s journey so far.

“This one specifically, when I started writing it I focused a lot on where we were at in our lives,” he said. “I’m in vet school, some of the other guys are finishing up school, and I was thinking how we built this band up on our own coming up on the past two years. Kind of the idea of playing shows and doing things we never thought we’d be able to do and leaning back on all these people that have supported us while we chase all of these crazy dreams at once — almost like a love letter.”

The band, which in addition to Miller, Jenkins and Ossont includes Daulton Rissinger (rhythm guitar) and Luke Prusinski (bass), counts Jimmy Eat World, Bayside and My Chemical Romance among its influences. But Miller’s vocals come from an unexpected source.

“When I started writing it I focused a lot on where we were at in our lives.”

“Our bassist Luke and his brother have been some of my best friends for a long time,” he said. “They would always do choir and festivals and were really into it, but I was always a band guy and didn’t even want to attempt to sing. I actually started singing because they said if you want to go to more festivals, try singing in a tenor, it’s easy. I took some lessons for choir, then I started working on sounding less formal. It kind of developed slowly, mostly from playing acoustic gigs. I sort of learned that the techniques [from choir] will help any singer. I didn’t realize it could complement our sound.”

With the band scattered — Ossont in Blacksburg, Va., Miller in Carlisle, Pa., and the others in the Scranton area — and venues shut down, even a socially distanced, outdoor show would be tough to pull off right now.

“Truthfully, we’re at a spot now where with us being spread out and being able to play a show at maybe 25 percent capacity at a venue, we’re not sure that’s something we can even reasonably do,” Ossont explained. “Not that money is the biggest thing for our music, but with the travel costs, is it even worth it for us to do it as a full band?”

“But we’d be totally open to playing a drive-in show,” he said when asked about the proposition. “We haven’t been granted the opportunity yet, and I think that’s something that [promoters] are trying to navigate at this point.”

“We sort of collectively came to this decision that the live concert industry right now is just in shambles, and we don’t know what our options are,” Miller said. “We’re in the middle of a release, so we’re focused on that right now. Of course, we’d love to go out on the tour that we had planed, but it could have been worse. We could have had nothing in the pipeline.” 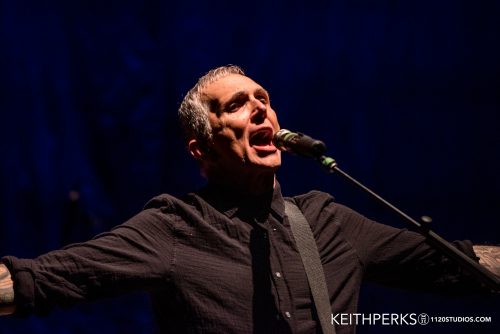