Musicians, whether they’re performing on stage or living their lives off it, often view photographers as intrusive, annoying or a necessary evil of the industry, or some uneasy combination of all three: Shoot your three songs or your portrait, then get the heck out of here. But the members of the Grateful Dead — who did their best to avoid the rock star image and even resisted having publicity photos taken early in their career — welcomed Susana Millman into their world in the 1980s, with Jerry Garcia and friends going beyond mere tolerance of her and her camera.

Millman published some of her favorite photos of the Dead and the band’s extended family in 2016 in her lovingly compiled coffee table book, “Alive With the Dead or a Fly on the Wall with a Camera.” After the initial run sold out, the publisher Last Gasp — the San Francisco house known for publishing R. Crumb’s comics — stepped in to print a new edition late last year. (The only differences from the initial run: There is no slipcase, and the centerspread list of the book’s supporters has been replaced with tributes to the late Dead lyricists Robert Hunter and John Perry Barlow.)

Millman, who lives in San Francisco with her husband, Dennis McNally, the Dead’s longtime publicist, author and band scholar, recently chatted with us about her uniquely intimate relationship with the Dead, the moments she is looking for when she’s in the photo pit and why a Chinese company refused to print the second edition of “Alive with the Dead.”

At the beginning of the book, you write about how you became a fly on the wall, and you talk about access. Most concert photographers have to follow strict rules, like “first three songs, no flash.” Did you ever have those restrictions, or did you have all access from the beginning?

Well, not the very beginning. But after Dennis and I were married, yeah. I never really thought to ask for it before. Also, it took me a few years and inspiration from Jerilyn Brandelius’ “Grateful Dead Family Album” to realize that the most interesting things going on is the stuff that’s offstage. It’s great to have photo pit access and I loved every minute of it, and I also loved times like Chinese New Year in 1993, which Jerry sang the encore of “Gloria” and he was so happy and he was wearing a gray T-shirt, which was different, and he was just beaming. If I had not had special access I would not have been able to get that photo because only Ken Friedman, who was Bill Graham’s photographer, was in the pit with me at that time.

What did it feel like when the lights went down and the show was about to start, and what were you contending with? Were you jostling for position?

For some places, that’s why it was good to have a photo pit, which there always was at Grateful Dead shows. Not so much at Jerry shows, Jerry Garcia Band shows. But I’m from New York and I can give elbows with the best of them. I was always grateful for the access to the extra songs when the lighting was good, because the first three songs the lighting was not necessarily good, and actually, for some of it, it was really bad. I don’t mean that it was bad lighting, it was bad to take photos by, depending on what they played and how upbeat it was or not.

Candace Brightman was the Dead’s lighting designer for years…. 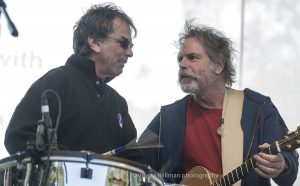 How much was what she was doing part of what you were capturing?

That was a great deal of what I was capturing. I loved her lights. One of my great privileges was in ‘89 when they were starting to go to bigger venues, she was testing out new lighting and she got six mannequins to impersonate the guys on stage, and I was fortunate to be able to shoot that, her different lighting setups, which was just great fun.

When you started shooting the band, where were you in your development as a photographer? Were you fully developed and confident?

Nope. Not at all. Photography was my third career, starting in the ‘80s. When I had a clothing import-export business, I was traveling a lot in India and Bali and Southeast Asia and just seeing amazing things that I realized I couldn’t just talk about, I had to take a picture of them to share with friends at home. And then I thought, why not photograph the Grateful Dead while I’m at it? That looks like it would be fun to do. So I learned a great deal, particularly in dealing with event photography and concert lighting and spot metering; it’s a pretty specialized thing, and you want to capture it just as it is, and God forbid, no flash.

One of my sins was at the Stone [Keystone in Berkeley, Calif.], the first time I saw a Jerry show I took a flash picture, and a friend of mine who was an assistant of Jerry’s said, “Susana, how could you have done that?” And I went, Oh my God. Of course, when I have had circumstances of being on stage and seeing somebody using a flash, it’s horrible (laughs). It’s a terrible thing.

As a fan of the Grateful Dead, can you get lost in the moment and forget you are there to shoot for a minute?

Oh yes, that could happen, and in fact, it probably did. I usually try to give myself one night of a run to just have fun and not take any pictures, although I’d always bring my camera and camera bag with me and probably wind up taking pictures anyway. Mostly I was looking for different interactions between them, and those are the shots that I treasure the most. You know that little section in the book “WTF Bobby?” where Bobby [Weir] could get really out there and Jerry would just give him “the look” — amazed, amused, perplexed, whatever. Those were really some of my favorite type things to capture between the guys. 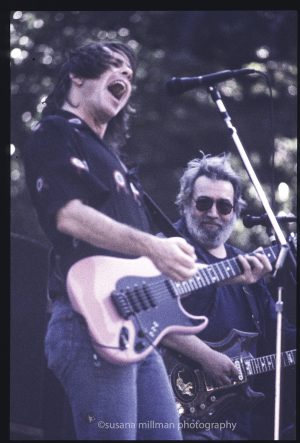 The book also includes candid offstage moments, like band members and their families eating dinner and sightseeing in Europe. How did they feel about you taking those photos?

Oh, well that’s why I was a fly on the wall. After a point, I just blended into the background. And also what Jerily said, which was really sweet and made me feel great, she said, “Well, it’s different when she points a camera, she’s family.” So there was that, too. And I’m small, I’m benign, and it was just what I did, and everybody had the thing of what they did. That was what I did, and I thought, God, people might not recognize me without the camera, who knows.

When Jerry died, some Deadheads said they would never go to a show again. Did you jump back in or did you have some trepidation?

Well, yeah, I did have some trepidation, but I went on the Furthur [Festival] tour and watched them develop their individual bands and how some of the bands like Ratdog really improved over time. It was where I saw my friends, too, so I kept wanting to go to shows, although I miss Jerry terribly.

You have some photos of Dead and Company in the book. As a fan, what is your opinion of that band?

I like them, I like Dead and Company a lot. I wasn’t able for health reasons to go to the Fare Thee Well shows in 2015, but then later in 2015 I went to the Dead and Company show at the Bill Graham Civic, and it was like, Oh my God, I’m home. This is my music. So I’ve seen Dead and Company with fair regularity when they’re at Shoreline. 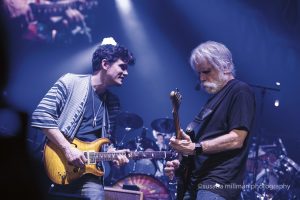 Dead and Company has the added wrinkle of a bona fide pop star in John Mayer in the band. How have you approached photographing him?

What I like is how he’s brought Bobby back to life, and they have such a good time jamming together, so it’s the looks between those two that I try to capture. I’ve also been fortunate enough to pretty much have access to shoot the whole show at Dead and Company, so that’s made me happy.

I really like the section of the book about your wedding and Jerry walking you down the aisle at the Oasis.

At that time, I don’t know if it’s true now, it had a covered swimming pool outside, and I told Jerry that he could walk on water if he walked me down the aisle, and that was sufficiently weird for him to touch his imagination. 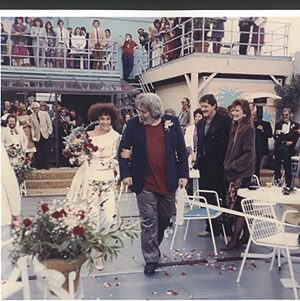 In that section of the book, he tells you that he was nervous to do it. Did that surprise you?

Oh, yes. Oh, yes. He didn’t tell me, he told one of my girlfriends in the green room. They said, Jerry, you play in front of thousands of people all of the time. He said, Yeah, I don’t have my ax, man. I understand that, because me without a camera, I’m facing the world directly now.

I thought it was really nice that you chose “Attics of My Life” as your processional song. What resonated with you and Dennis about that song?

It’s just such a sweet song, and you know, maybe the line, “When I had no wings to fly, you flew to me.”

Was Robert Hunter, who wrote the lyrics, there?

Yes, Hunter was there as well.

Is there anything else you’d like to mention about the book?

Yes. One of my favorite things that the Dead did offstage was Mickey [Hart] with the Gyuto monks. So there’s a picture in there of Mickey vacuuming the floor at his house when the monks were coming to record. Now that’s a very rare photograph, you go to admit. How sincere he was and how much he loved and respected the monks and how he wanted the place to be perfect for them to do their recording. It was just great. The energy in that space with those guys was unbelievable. And there was another event at his house in ‘95 where Jerry Garcia and Jerry Brown were both there, and the monks. 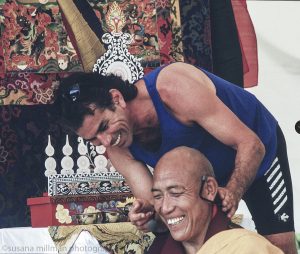 What happened was the first book was printed in China, and this book was also going to be printed in China. However, the world was in a more kindler, gentler place in 2016 than in 2020, because in 2020 the Chinese refused to print this book unless I took out the pictures of the monks, and I was not about to do that, because as I’ve just been sharing with you, one of my favorite things in the world are some of those pictures, so thank goodness Last Gasp got it printed in Korea and they did a great job.

Do you plan to do another book?

If I do do another book, it wouldn’t be about the Grateful Dead because the pictures that didn’t make it into the book were concert pictures, and God knows people have seen enough of really wonderful concert pictures of the band, so I wouldn’t want to do a book about that. If I did anything, it might be about travel photography, with an emphasis on Eastern religion.

All photos courtesy of Susana Millman.

For more information on Susana and “Alive With The Dead,” visit her website.