As a founding member of The Moody Blues and the only constant member of Wings besides Paul McCartney and Linda McCartney, Rock & Roll Hall of Famer Denny Laine has no shortage of beloved songs and riveting stories. He’ll be sharing both at the FM Kirby Center in Wilkes-Barre, Pa., on Friday June 7 as part of his aptly titled “Songs & Stories” tour.

The British guitarist and singer formed The Moody Blues in 1964 with Mike Pinder and Ray Thomas, and he sang on their first hit, “Go Now.” After performing on their debut album, “The Magnificent Moodies,” and a tour opening for The Beatles, Laine left the group. He formed the Electric String Band — a sort of precursor to the Electric Light Orchestra — played in a band called Balls and joined Ginger Baker’s Air Force before reconnecting with McCartney in Wings in 1971.

We recently chatted with Laine, who now makes his home in the New York area, in advance of his show in Northeastern Pennsylvania.

Does revisiting these old songs and telling the stories behind them bring back old memories for you?

Yeah, it definitely does that. It reminds you of those days, of course. Some of the songs that I do are from solo projects that I’ve done and I will do those songs as I’ve written them. I’m not doing any keyboard songs because I’m not bringing any keyboards with me. I’m playing them in their raw form on acoustic guitar. I’m also doing songs I wrote with Paul and with Mike Pinder from The Moody Blues, and it brings back those days, the influences, all the different styles of music. We were very much into folk and reggae and rhythm & blues, and jazz even. We used to listen to classical, which was happening with George Martin and The Beatles.

How did you feel about getting inducted into the Rock & Roll Hall of Fame with The Moody Blues?

Well, that was really something that I didn’t expect, and we were just kind of pleasantly surprised. I thought it was just going to be the other Moody Blues version because of their body of work. Also I really appreciate the Rock & Roll Hall of Fame, and in England we don’t have one as such. It kind of shows you the importance and the size of it and how expansive it all is. It’s very good for the fans, it’s good to get your name out there. Let’s be honest, it’s very good exposure. 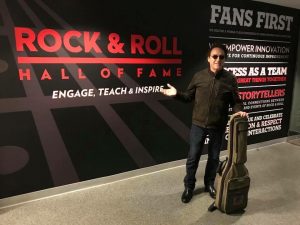 Did you get to know Paul McCartney when the Moody Blues were opening for The Beatles?

We had already been friends of theirs. I had met The Beatles in Birmingham at parties and stuff. They’d come to our parties. We were knocking around quite a bit in the early days, George and John, because they were locals. Paul and the others lived outside of the town. The Beatles (tour) came about because we were both managed by Brian Epstein.

It seems like Paul was looking for you to be more than a hired gun when he asked you to start Wings with him.

Yeah, definitely. I wasn’t doing Moody Blues stuff, I was going out there and doing my own stuff; I would play “Go Now” and a couple things. I had a little band called the Electric String Band, that was violins and cellos and a (rock) band, so that was kind of like ELO in a way. So (Paul) saw me do that with Jimi Hendrix at a theater — John and Peter Asher saw that show too. (Paul) saw me doing something like that and said that’s what he wanted to do, something more experimental. That’s why we kind of went in a completely different direction to what he had been doing. We got lucky with it.

Was there a sense that no matter how good Wings were it wouldn’t measure up to the Beatles?

It was always in the back of your mind. How do you follow The Beatles? He started to do his solo stuff and it took a while to build up to that level. It was purely just a fact of getting a band that could sound pretty good live, which we did. We got better and better. When you’re in a band doing it for years, it’s very hard and takes a long time to get to that level. It was easier for me because we knew each other so well. We had the same attitude toward it all, and we knew that if we just played live as much as possible we’d get good, and that includes the studio performances.

How was Paul as a bandleader?

Well, he was definitely a bandleader because it was his fame that made it that way, but he wasn’t so much like that in the studio. He was more encouraging you to come up with ideas too. I don’t see him as much of a bandleader; obviously, on the road he was the forefront of it.

The documentary film “Beware of Mr. Baker” depicts Cream drummer Ginger Baker as a madman. What was your relationship with him like?

I never had any problems with Ginger. I always liked him. At the same time, he was a drummer (laughs). Drummers have a lot of energy. But at the same time he was a good bandleader. He kind of gave everyone else a little freedom, it was more about jamming and soloing. I met Ginger when he was with the Gramah Broad Organisation and we did the first Moody Blues tour with Chuck Berry. He opened for us. We did a lot of traveling and I never had any problems with him. Even though he’s got a reputation for being short-tempered – but we all can be.